THE NINE STAGES OF CIVILIZATION ~ WE'RE ENTERING THE EIGHTH, DEPENDENCE 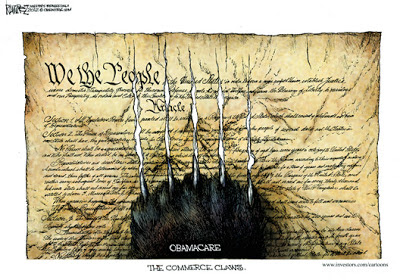 The United States is now firmly entering  the eighth stage of all civilizations ~ Dependence with only Bondage ahead of it. Apathy has allowed our constitution to be shredded in stage seven which led to our current state of Dependence on the state ~ but soon an IRS monitored Obamacare program of 'Shared responsibility, or else' will usher in the Orwellian ninth stage of militarized Bondage: Allen L Roland

Last year I wrote that the average age of the world’s greatest civilizations has been two hundred years and that these nations have progressed through a nine stage sequence: From bondage to spiritual faith; from spiritual faith to great courage; from courage to liberty; from liberty to abundance; from abundance to selfishness; from selfishness to complacency; from complacence to apathy; from apathy to dependence; from dependency back again into bondage. http://www.veteranstoday.com/2012/03/19/the-nine-stages-of-civilization-were-in-the-seventh-apathy/

As Ramsey Clark, former U.S. Attorney General, once correctly said ~ ”We’re not a democracy. It’s a terrible misunderstanding and a slander to the idea of democracy to call us that. In reality, we’re a plutocracy: a government by the wealthy.”

In our present Plutocracy, we made the transition last year from complacency to national apathy ~ but with the passage and implementation of Obamacare, along with an increasingly militarized surveillance state, we have now entered stage eight, Dependence on the state ~ which will soon be followed with militarized Bondage by the state.

John Adams once correctly defined the perils of dependence ~ " The nature of the encroachment upon American constitution is such, as to grow every day more and more encroaching. Like a cancer; it eats faster and faster every hour. The revenue creates pensioners, and the pensioners urge for more revenue. The people grow less steady, spirited and virtuous, the seekers more numerous and more corrupt, and every day increases the circles of their dependents and expectants, until virtue, integrity, public spirit, simplicity and frugality become the objects of ridicule and scorn, and vanity, luxury, foppery, selfishness, meanness, and downright venality swallow up the whole of society. "

Obamacare or 'shared-responsibility or else'  is the most visible evidence of the plutocracy's leveraged buyout of Democracy as we officially enter stage eight of our rapidly crumbling civilization or empire ~ and no one nails this truth better than Bill Moyers. 5 Minute video ~  http://www.youtube.com/watch?feature=player_embedded&v=hZ5tj4cN9Jk

Obamacare is a blatant but sad joke played on an apathetic American public who are already becoming conditioned for dependence by the plutocracy. Here's the hypocrisy of Obamacare in a single sentence. 2 minute video ~ http://www.brasschecktv.com/videos/health-and-medical-1/the-new-us-health-care-program.html

Part and parcel of this shift to Dependence is a growing surveillance and police state ~ as clearly evidenced in the recent lockdown of Boston. Henry Giroux noted this some point in his provocative recent article in AlterNet ~ Did the Authorities' lockdown of Boston Give us a Taste of The Police State Culture to Come?

Excerpt:  "Militarism thrives on the mass produced culture of fear and the spectacle of violence.  It abhors dissent and flourishes in an ever expanding web of secrecy. Both Bush and Obama have used the cult of secrecy and the threat of punishment to silence whistleblowers, allow those who have committed torture under the government direction to go free, and refused those who have been “interrogated” illegally to take their case to the courts."
Giroux correctly concludes that the American public at large is so immersed in fear and cruelty that they are more than willing to surrender their rights at the first whiff of danger ~ and that, I would add, is the most important step in the process of moving from Dependence to a militarized state of Bondage ~ the exploitation of fear and danger for the benefit of the state or plutocracy.

Are you aware that thousands of US police including the FBI director and NYC Chief of Police have been getting "law enforcement training" from Israel?
What are they learning from the very same thugs who brutalize Palestinians daily? Very simply, that "All civilians are probable criminals and should be treated that way."

Here is an 8 minute RT Video interview with Max Blumenthal in 2011 on the intentional militarization of the police force ~ which has now become painfully obvious in the recent Boston Bombings.
http://www.brasschecktv.com/page/22707.html

Huxley correctly predicted in Brave New World that the truth would eventually be drowned in a sea of irrelevance ~ which is precisely the case now as we transition from Apathy to Dependence.

Truth talker Chris Hedges describes the symptoms of the rapidly approaching  last stage of Bondage ~ for it will indeed be marked by  The Death of Truth   "The world has been turned upside down. The pestilence of corporate totalitarianism is spreading rapidly over the earth. The criminals have seized power. It is not, in the end, simply Assange or Manning they want. It is all who dare to defy the official narrative, to expose the big lie of the global corporate state. The persecution of Assange and Manning is the harbinger of what is to come, the rise of a bitter world where criminals in Brooks Brothers suits and gangsters in beribboned military uniforms ~ propped up by a vast internal and external security apparatus, a compliant press and a morally bankrupt political elite ~ monitor and crush those who dissent. Writers, artists, actors, journalists, scientists, intellectuals and workers will be forced to obey or thrown into bondage. I fear for Julian Assange. I fear for Bradley Manning. I fear for us all"
http://www.informationclearinghouse.info/article34844.htm

As a civilization or empire collapses from within ~ all citizens eventually are seen as potential terrorists and the local police role changes from protecting the public to protecting the plutocracy.

Seen through clearer eyes ~ as Pepe Escobar explains ~ the recent Boston bombings police reaction was a prelude to Martial Law ~
" What the day-long delay in Dzhokhar's arrest indeed made possible was to turn Watertown into a monster dry run for urban martial law - euphemized as ''lockdown'' - in a very near future. As total militarization of civilian life goes - featuring, for instance, Homeland Security running amok with hundreds of armored vehicles - this was a major success. Meanwhile, on the ''legal'' front, the White House and the Justice Department are firmly on track to finally suppress the Miranda warning; that went into effect already two years ago, when an Obama secret executive order ruled the Miranda warning would not apply to suspected terrorists." See article ~ http://www.atimes.com/atimes/World/WOR-01-230413.html

The day is fast approaching when speaking the truth will be seen as an act of terrorism, and we will finally realize that we have become totally dependent on the state, that our cherished individual freedoms were trashed in that process and that it was all done in the glorious name of national security.

"So long as the people do not care to exercise their freedom, those who wish to tyrannize will do so; for tyrants are active and ardent, and will devote themselves in the name of any number of gods, religious and otherwise, to put shackles upon sleeping men" : Voltaire.