SENIORS, VETS UNITE / OBAMA IS PUSHING US OVER THE CLIFF 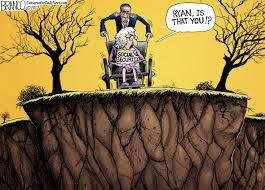 Seniors and vets, it's happening before our very eyes ~ President Obama, not Paul Ryan, is pushing our highly dependable Social Security benefits program over the cliff while playing politics with the Republicans and over the wishes of 87% of those over 50 years of age who oppose any cuts to social security benefits: Allen L Roland

"Social Security...is not a dole or a device for giving everybody something for nothing. True Social Security must consist of rights which are earned rights ~ guaranteed by the law of the land." Harry S. Truman, August 13, 1945

Voters should know that Social Security is not an entitlement but rather a system of wage replacement insurance, which we, as workers, pay for in payroll taxes throughout our working lives. The system provides benefits when workers stop receiving wages due to retirement, disability or premature death. And voters should also know that Social Security is solid and dependable; it hasn't missed a payment in 77 years, is currently running a surplus of $2.7 trillion, and is solvent for the next quarter century. In an economy that continues to be sluggish, with unemployment unacceptably high, Social Security is the solution, not the problem ~ and it must now be strengthened, if not increased, and most certainly not undermined by millionaire politicians who answer to the financial elite and ignore the public.

Social Security is built to last and here's a short 4 minute video that demonstrates that reality. https://www.youtube.com/watch?v=lHAcy4SNVbo

As Thom Hartman correctly wrote in his blog on Monday ~ There is nothing Grand about Obama's grand social security bargain ~ " Despite the fact that Americans want Medicare and Social Security protected, President Obama has once again included cuts to the vital programs as part of his new budget proposal. As he's done previously, the President has offered up a change to cost of living increases - called the chained CPI - which reduces benefits paid to seniors, veterans, and the disabled… A new report from AlterNet highlights several facts that the President should consider before asking the poor to bear the brunt of more budget cuts. According to the report, half of American workers are "not at all confident" that they will be financially stable in their retirement, and only 57% have managed to save $25,000 or less."

So what does CPI stand for and what's the bottom line on this latest Obama betrayal ?
CPI stands for consumer price index, a formula that looks at how the prices of stuff we need (food, for example) change over time. It's used to make cost-of-living adjustments in programs such as Social Security, veterans benefits and food stamps.

The chained CPI is a twist on that: It measures living costs differently because it assumes that when prices for one thing go up, people sometimes settle for cheaper substitutes (if beef prices go up, for example, they'll buy more chicken and less beef).

The Bottom line is  Cost-of-living adjustments would be lower with the chained CPI than with the plain old CPI. So depending on which formula is used, the amount of your Social Security payments could negatively change over time.

As Richard Eskow explains in Common Dreams ~ "What makes the chained CPI particularly unkind is the fact that millions of Americans have already had their Social Security benefits cut.  Benefits are determined based on a person’s lifetime earnings, so any significant loss in income now results in a benefit cut later. (More details here.)

Unless the President’s budget excludes the chained CPI from IRS calculation, it would also lead to tax increases for all income except that in the highest tax bracket. So his Social Security cut would also be a middle-class tax hike."
Read full article ~ http://www.commondreams.org/view/2013/04/08?nocache=1

It should be obvious that the formula for calculating Social Security's COLA's should realistically reflect the actual increases in beneficiaries' living expenses over time. The chained CPI fails that test because it assumes that when one particular product becomes more expensive, consumers can simply substitute a cheaper one. But the cost of health care, especially medication, is a major expense for seniors and it's not accounted for.
George Carlin knew the big picture on who really owns America ~ that education sucks as well as the mass media and that eventually they would come after our social security ~ three minute video  http://www.youtube.com/watch?v=Dpcd0woY2KY

The movement that all Americans should get behind now is the Move to Amend Movement that states " We, the People of the United States of America, reject the U.S. Supreme Court's Citizens United ruling and other related cases, and move to amend our Constitution to firmly establish that money is not speech, and that human beings, not corporations, are persons entitled to constitutional rights." https://movetoamend.org/

Before President Obama’s second term began, the World Socialist Web Site warned that Obama was preparing an unprecedented attack on the bedrock social programs. On the day of Obama’s second inaugural address, the WSWS warned, “It is already clear that the second term will mark an intensification of the right-wing policies of the first. The byword in domestic policy is austerity, targeting the core programs remaining from the 1930s and 1960s ~ Social Security and Medicare… The actions of the Obama administration in its second term are a confirmation of what was already clear from the first term: that the political system in the United States, whether headed by a Democrat or a Republican, is impervious to the needs and interests of the vast majority of the population, the working class. It is a system completely subordinate to the demands of the corporate and financial elite." See report http://www.wsws.org/en/articles/2013/04/08/pers-a08.html

The future is here, people ~ and there is no change without action. The survival of our Republic is at stake. It's We the people, not we the corporations.

Allen L Roland is a practicing psychotherapist, author and lecturer who also shares a daily political and social commentary on his web log and website allenroland.com He also guest hosts a monthly national radio show TRUTHTALK on www.conscioustalk.net
Posted by Allen L Roland, Ph.D at 5:40 PM