AMERICA'S AUSCHWITZ IS THE EVIL OF GUANTANAMO 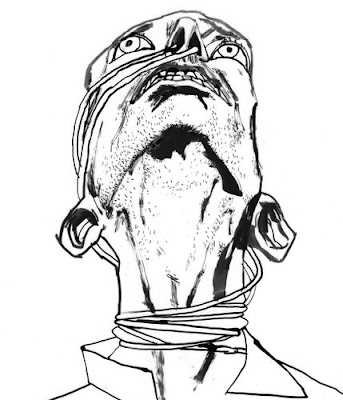 Image/Matt Rota NYT
Gitmo detainee being force fed against his will.

America's Auschwitz is the evil of Guantanamo ~ a festering open sore of civil and human rights abuse and a blatant reminder that the name Guantanamo evokes criminality and torture to the rest of the world: Allen L Roland

As Michael Ratner reports : "The Obama Administration is responsible for the continued imprisonment of 86 men who were found not to have been involved in any crime or act of war.
Eleven years later, there is no sign these people will ever be released.
In case you forget, Obama promised to shut Guantanamo down. "
Real News 13 minute interview with Michael Ratner
http://www.brasschecktv.com/page/22829.html

So why does Obama refuse to deliver on his promise to close this open sore of civil and human rights abuse ?
To me, the obvious reason goes back to the Big, Big lie of 9/11 and Obama's continuance of the Bush administration's decision to justify torture, illegal rendition, forced confessions and indefinite imprisonment of innocent civilians in order to maintain the perception of implied external guilt for an obvious internal false flag attack on America ~ which was orchestrated or at the very least condoned by the Cheney/Bush administration and their cabal of American traitors.

As Ratner correctly points out on Real News, Guantanamo is an international moral outrage but I maintain that the Obama administration continues the tradition of the Cheney/Bush decade by implementing any means, however illegal, towards the end of maintaining the transparent and discredited façade of the official 9/11 story as well as the equally transparent and discredited War on Terror.

Here are the words of Gitmo detainee, Samor Naji Al Hasan Moqbel, published in the New York Times this week ~

" I’ve been on a hunger strike since Feb. 10 and have lost well over 30 pounds. I will not eat until they restore my dignity.

I’ve been detained at Guantánamo for 11 years and three months. I have never been charged with any crime. I have never received a trial. I could have been home years ago — no one seriously thinks I am a threat — but still I am here. Years ago the military said I was a “guard” for Osama bin Laden, but this was nonsense, like something out of the American movies I used to watch. They don’t even seem to believe it anymore. But they don’t seem to care how long I sit here, either… I will never forget the first time they passed the feeding tube up my nose. I can’t describe how painful it is to be force-fed this way. As it was thrust in, it made me feel like throwing up. I wanted to vomit, but I couldn’t. There was agony in my chest, throat and stomach. I had never experienced such pain before. I would not wish this cruel punishment upon anyone. I am still being force-fed. Two times a day they tie me to a chair in my cell. My arms, legs and head are strapped down. I never know when they will come. Sometimes they come during the night, as late as 11 p.m., when I’m sleeping… The situation is desperate now. All of the detainees here are suffering deeply. At least 40 people here are on a hunger strike. People are fainting with exhaustion every day. I have vomited blood…. And there is no end in sight to our imprisonment. Denying ourselves food and risking death every day is the choice we have made. I just hope that because of the pain we are suffering, the eyes of the world will once again look to Guantánamo before it is too late."   See full article ~ http://www.nytimes.com/2013/04/15/opinion/hunger-striking-at-guantanamo-bay.html?
The first rule in climbing out of this national prison of fear is maintaining a healthy level of informed skepticism regarding our government's actions and most certainly do not underestimate our government's willingness to create another false flag incident (yes, perhaps even the recent Boston marathon deadly explosion) in order to fan the flames of fear and the continued diminishing of our civil and human rights ~ and of course always under the banner of the War on Terror or national security.

Here's a reality check on the possibility of government involvement in the Boston bombing ~ and I'm not the only person asking that question: 4 minute Video ~
http://www.brasschecktv.com/page/23056.html

Chauncey DeVega correctly questions our empathy in AlterNet ~ "I wonder how much better, or perhaps worse in some counter intuitive ways, our world would be if the American people could be as upset about the deaths from the bombing of the Boston Massacre, as those others which occur almost every day, all over the world ~ many of which are either directly or indirectly done in supposed pursuit of "national defense" and/or the United States' "national security."

The new normal for America is torture, false imprisonment  and Drone assassinations. The world knows it ~ but we still can't quite accept the ugly reality that America's Auschwitz is the evil of Guantanamo.
4 minute video / RT
https://www.youtube.com/watch?v=R0_TGDi8X2E

Allen L Roland is a practicing psychotherapist, author and lecturer who also shares a daily political and social commentary on his web log and website allenroland.com He also guest hosts a monthly national radio show TRUTHTALK on www.conscioustalk.net
Posted by Allen L Roland, Ph.D at 4:28 PM