GREAT LEVELER OF SOCIETY IS POVERTY 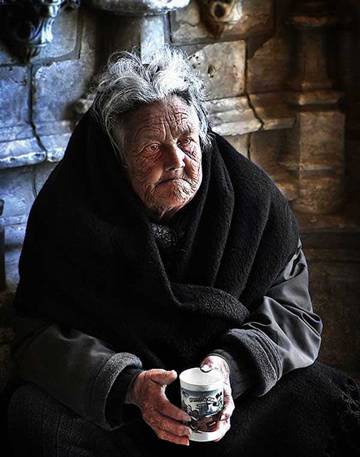 The Face of Poverty / Old Beggar by Maciej Ciezki

Mahatma Gandhi wrote Poverty is the worst form of violence. As such, America is the greatest perpetrator of this violence with close to 50 million people living in poverty including 16 million children ~ yet the Obama administration refuses to publicly acknowledge this great leveler of society: Allen L Roland

"Coming generations will learn equality from poverty, and love from woes."  Khalil Gibran

John Berger correctly wrote that " The poverty of our century is unlike that of any other. It is not, as poverty was before, the result of natural scarcity, but of a set of priorities imposed upon the rest of the world by the rich."
Nowhere is that more evident than the United States where the number of people enrolled in the food stamp program has risen by 70 percent since 2008 to almost 50 million citizens ~ while the Stock Market and corporate profits have soared to all-time highs.
Poverty is the state of one who lacks a certain amount of material possessions or money while absolute poverty or destitution refers to the one who lacks basic human needs, which commonly includes clean and fresh water, nutrition, health care, education, clothing and shelter.

Worldwide, about 1.7 billion people are estimated to live in absolute poverty today. One third of deaths ~ some 18 million people a year or 50,000 per day ~ are due to poverty-related causes: in total 270 million people, most of them women and children, have died as a result of poverty since 1990. According to the World Health Organization, hunger and malnutrition are the single gravest threats to the world’s public health and malnutrition is by far the biggest contributor to child mortality, present in half of all cases.

Instead of a worldwide War on Terror based on illusory fears we, as a society, must institute a worldwide War on Poverty (the feeding ground of social unrest and revolt) and in the process reinforce our innate desire of altruism and social cooperation versus separation and social deprivation.

Unless we make this a priority, as Gibran wrote, our children and grandchildren will be condemned to learn equality through universal poverty and be forced to eventually love and cooperate with each other through their common woes.

Half of the world is affected by this disease of poverty and the rest will soon be as our financial house of cards built on greed and selfishness eventually crumbles ~ as it almost did in 2008.
Last month President Obama signed a bill making permanent 85 billion dollars in budget cuts, which will slash billions from benefits for the poor. The cuts will affect subsidized housing, pre-school education programs and healthcare in underprivileged neighborhoods further leveling our society.

The people in power are not truly our friends and that includes President Obama. Three minute video ~ http://www.brasschecktv.com/page/22862.html

So what is "poverty"? According to the U.S. Census Bureau, it's less than $11,945 per year for a single person, and $23,283 for a family of four.
Nearly a quarter of people who live in poverty have jobs, but their pay is so low that they still don't have enough money to meet basic needs like food, shelter, clothing and health care. That most certainly includes veterans who are committing suicide at the rate of over 22 a day.

2. A single top income could buy housing for every homeless person in the U.S. "For anyone still believing "they earned it,"  it should be noted that  most of the Forbes 400 earnings came from  minimally-taxed, non-job-creating capital gains."

3. The poorest 47% of Americans have no wealth. " In 2009 the poorest  47% of America owned  ZERO PERCENT of the nation's wealth (their debt exceeded their assets). At the other extreme, the  400 wealthiest Americans own as much wealth as 80 million families ~ 62% of America. The reason, once again, is the stock market. Since 1980 the American GDP has approximately doubled. Inflation-adjusted wages have gone down, but the stock market has increased by over ten times, and the richest quintile of Americans owns 93% of it."

4. The U.S. is nearly the most wealth unequal country in the entire world. "Out of 141 countries, the U.S. has the 4th-highest degree of  wealth inequality in the world, trailing only Russia, Ukraine, and Lebanon… According to the authors of the Global Wealth Report, the world's wealth has doubled in ten years, from $113 trillion to $223 trillion, and is expected to reach $330 trillion by 2017."

Buchheit offers two solutions for a much needed attack on greed  ~ " End the  capital gains giveaway, which benefits the wealthy almost exclusively and Institute a  Financial Speculation Tax, both to raise needed funds from a currently untaxed subsidy on stock purchases, and to reduce the risk of the irresponsible trading that nearly brought down the economy."  See article ~ http://www.alternet.org/economy/five-ugly-extremes-inequality-america-contrasts-will-drop-your-chin-floor

Obviously, the great leveler of society in America, if not the world, is also moral poverty for we have replaced altruism and social cooperation ~ the driving forces of evolution ~ with greed and selfishness and the consequences are now upon us with accelerating worldwide social unrest and revolt.

Is it any wonder that 44% of Americans are one financial shock away from complete ruin.

A stunning new report out of the Corporation for Enterprise Development, finds that 44% of Americans are just one financial shock away from complete ruin. Nearly half the nation doesn’t have enough savings to keep them out of poverty for more than 3 months, should they suffer a job loss, an accident, a sickness, or other financial setback. Another recent study out of the Consumer Federation of American, found that 40% of all American households live paycheck-to-paycheck, with virtually no savings.

Why are the rich getting richer, and the poor getting poorer?

Because state and local governments are taxing the super-rich at half the rate they tax the poor. That’s the conclusion of a new study out of the Institute on Taxation and Economic Policy, which examined state, local, property, and sales taxes around the nation. According to the results, the poorest 20% of Americans pay an effective tax rate of 11%. And the middle 20% pay a 9.4% rate. But guess how much the top 1% pays? Just a measly 5.6% - half the tax rate of the poor.

A new report published by FICO Labs, finds that the student-loan delinquency rate rose 22% from 2005 to 2007 – with more than 15% of all students being forced into default on their loans. The rapidly increasing price of college tuition, the cutbacks in government assistance for students, and the non-existent job market, are all conspiring together to saddle our next generation of leaders with enormous piles of debt.

And most seniors over 65 years of age, which includes myself, who anticipated that their social security would be a safety net in their golden years are facing the sad reality that their social security check is the only thing keeping them from facing poverty ~ if not absolute poverty.
It all starts at the top with the US Government and the stark reality that the Federal Reserve is propping up the entire U.S. economy and house of debt by buying at least 61 percent of the government debt issued by the Treasury Department ~ "a trend that cannot last", Lawrence Goodman, a former Treasury official and current president of the Center for Financial Stability, wrote in a Wall Street Journal opinion article published last year.

"Last year the Fed purchased a stunning 61 percent of the total net Treasury issuance, up from negligible amounts prior to the 2008 financial crisis," Goodman wrote. Goodman also warns that U.S. economy and markets are “at risk for a sharp correction” if conditions aren’t “normalized.”
"This not only creates the false appearance of limitless demand for U.S. debt but also blunts any sense of urgency to reduce supersized budget deficits." Goodman correctly predicted.

So the national deficit doesn't matter, right?
That's what TV economists and politicians continue to say.

Not quite the case ~ for we pay for the deficit every day and WE are ultimately responsible for leveling our society through excessive debt and eventually its offspring, poverty.