THE SHAME AND SHOCK OF IRAQ 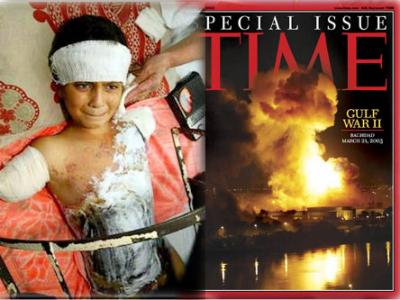 America's shame and shock is called Iraq and yet the mainstream media continue to down play the blatant hubris and criminal arrogance of the Cheney/Bush administration and outright avoidance of the human cost ~ one million Iraqi dead, five million displaced and hundreds of thousand Iraqi widows and orphans as well the disgraceful after effects of the illegal use of  depleted uranium munitions: Allen L Roland

"God is not on the side of any nation, yet we know He is on the side of justice. Our finest moments [as a nation] have come when we faithfully served the cause of justice for our own citizens, and for the people of other lands." - George W. Bush justifying Iraq war

"If we pursue this way, if we are decent, industrious, and honest, if we so loyally and truly fulfill our duty, then it is my conviction that in the future as in the past the lord God will always help us:" Adolf Hitler, at the Harvest Thanksgiving Festival on the Buckeburg held on 3 Oct. 1937

On July 7, 2010 I wrote Iraq is America's Gaza and almost three years later it remains the same if not worse  ~ Iraq is America's Gaza and, like Gaza, it cries for justice to a world which would rather ignore its plight as well as America's and Great Britain's role in this murderous error of judgement . Our karmic debt, like Israel's with Gaza, is immeasurable. See article ~
http://allenlrolandsweblog.blogspot.com/2010/07/iraq-is-americas-gaza.html

Let's make this crystal clear ~ The Bush/Blair illegal war against Iraq was the willful planned destruction of a civilization and the same consciousness is obviously at work in the current Obama dismemberment of Afghanistan.

As James Petras points out in his August, 2009 article THE DESTRUCTION OF A CIVILIZATION ~ " The sustained bloody purge of Iraq under US occupation resulted in killing 1.3 million Iraqi civilians during the first seven years after Bush invaded in March 2003 ...The militarist strategy of conquest and occupation of Iraq was designed to establish a long-term colonial military presence in the form of strategic military bases with a significant and sustained contingent of colonial military advisors and combat units. The Iraq war was driven by an influential group of neo-conservative and neo-liberal ideologues with strong ties to Israel. They viewed the success of the Iraq war ( by success they meant the total dismemberment of the country ) as the first ' domino' in a series of wars to ' re-colonize' the MIddle East .. Conflagrating Israeli regional hegemonic ambitions with the US imperial interests , the neo-conservatives and their neo-liberal fellow travelers in the Democratic party first backed President bush and later President Obama in their escalation of the wars against Afghanistan and Pakistan." See article:
http://www.informationclearinghouse.info/article233342.htm

Here's the current state of Iraq according to SFGate.com but note these figures are very similar to occupied Gaza.

Health: Iraq's child mortality rate has increased by 150% since 1990, when U.N. sanctions were first imposed.

Education: By 2008, only 50% of primary school-age children were attending class, down from 80% in 2005, and approximately 1,500 children were known to be held in detention facilities.

Children: In 2007, there were 5 million Iraqi orphans~ according to government officials.

Water: 70% of Iraqis do not have access to potable water.

Jobs: Unemployment is as high as 50% officially, 70% unofficially.

Sanitation: 80% of Iraqis do not have access to effective sanitation.

As Frank Rich wrote recently in the New York Times ~ "It's too early to say what the war's lasting impact on America (or Iraq or the Middle East) will be, but as for the current impact at home, any accounting must begin with the human cost. As David Rieff, a war opponent, wrote this week: "Could anyone who supported this war today encounter a relative, spouse, or friend of one of the American soldiers who was killed or grievously injured in Iraq and tell them with a straight face that this war was worth their sacrifice?" See article ~ http://readersupportednews.org/opinion2/265-34/16617-how-iraq-wounded-america

Iraq cries out for justice but our war crimes still remain unpunished and unacknowledged. Nicolas J.S. Davies makes the same point recently in AlterNet ~ " The reality of the "accumulated evil" unleashed on the people of Iraq by the "supreme international crime" of aggression has been painstakingly obscured behind a tapestry of lies.  Our military leaders may be chronically unable to win a war in another country, but they sure know how to wage a propaganda war in America:
- Fantastical notions of the accuracy of "precision" weapons obscured the widespread slaughter and destruction of the invasion, which unleashed  29,200 bombs and missiles in the first month of the war and  killed tens of thousands of civilians.
- Reports by the Iraqi Health Ministry in 2004 that occupation forces were killing far more civilians than were killed by "insurgents"  were efficiently suppressed.
- Epidemiologists who estimated that  650,000 Iraqis had died by 2006 were ignored or dismissed.  As the war went on, the number of dead  probably reached a million by 2008."

Davies correctly asserts the most disturbing face regarding this illegal and uneccessary occupation of a foreign country ~  "Perhaps the most disturbing aspect of the transition from Bush to Obama was that the new President not only failed to hold U.S. officials criminally accountable for their crimes but in fact embraced the doctrines and policy developed under Bush and expanded their application to U.S. policy around the world.  Obama's  ever-expanding drone strikes and doubling of Special Forces operations  from 60 to 120 countries are spreading the violence, lawlessness and instability of Bush's "war on terror" to the four corners of the Earth … The United States has a legal and moral duty to pay war reparations to Iraq to help its people recover from the results of aggression, genocide and war crimes - this is a central demand of one very special group of Americans whose experiences and sacrifices make them uniquely qualified to press such a demand:  Iraq Veterans Against the War."
See article ~
http://www.alternet.org/world/10-years-after-invasion-america-destroyed-iraq-our-war-crimes-

And who made money on the Iraq war ? Dick Cheney's Halliburton cashed in for $39 billion on the shame and shock of Iraq.

" I believe very deeply in the proposition that what we did in Iraq was the right thing to do. It was hard to do. It took a long time. There were significant costs involved." Dick Cheney

"freedom and fear, justice and cruelty have always been at war, and we know that God is not neutral between them." George W. Bush
"Iraq is sort of a situation where you've got a guy who drove the bus into the ditch. You obviously have to get the bus out of the ditch, and that's not easy to do, although you probably should fire the driver." Barack Obama, The Daily Show, Nov. 7, 2005

"Never in these long years have we offered any other prayer but this: Lord, grant to our people peace at home, and grant and preserve to them peace from the foreign foe!" : Adolf Hitler - Nuremberg Sept. 13, 1936.

The shame and shock of Iraq must begin with accountability and end with justice. Humanity demands it !

Allen L Roland is a practicing psychotherapist, author and lecturer who also shares a daily political and social commentary on his web log and website allenroland.com He also guest hosts a monthly national radio show TRUTHTALK on www.conscioustalk.net
Posted by Allen L Roland, Ph.D at 10:00 AM