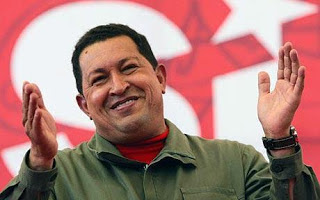 Larger than life and now larger than death ~ Hugo Chavez will not be forgotten. His permanently displayed embalmed body will be a constant reminder of his righteous indignation of the imperialistic West and our illegal wars of occupation in Iraq and Afghanistan as well as his empowering commitment to the Latin American poor and disenfranchised which even extended to the United States: Allen L Roland

"Like Bolívar, Chávez swore to break the chains binding Latin Americans to the will of the mighty. Within his lifetime, the ties of dependency and indirect empire have loosened" Oscar Guardiola-Rivera

Every lifetime personalities emerge whose personality, presence and commitment transcend politics and they stand alone at the pinnacle of human achievement. Nelson Mandela is one of these people as is Martin Luther King Jr but the irrepressible Hugo Chavez also belongs on that same world stage. Who can forget Chavez rightfully calling the Cheney/Bush administration the devil from the podium of the UN on September 20, 2006. Every word he spoke denouncing American intentions and imperialistic ambitions, to the enjoyment of many in the UN audience, was true ~ for seven years later American imperialism and exceptionalism is dying in the graveyard of Empires, Afghanistan. Three minute UN Chavez speech ~
https://www.youtube.com/watch?v=lOsABwCrn3E

As Chris Nineham correctly concludes in ICH ~ "Chavez put to shame all the so-called progressive leaders around the world who hide behind fabricated public opinion to justify embracing the market and moving to the right. He proved that radical policies work and win support. He showed that defiance of US imperialism is possible and popular. He will be missed in every corner of the globe." See article ~ http://www.informationclearinghouse.info/article34216.htm

He will be missed but not forgotten, as another nemesis to neoliberalism, British MP George Galloway, articulates on the death of Chavez during a recent interview ~ along with Republican congressman Luke Messer, who airily dismissed Chavez as an unimportant tyrant and despot and in the process revealed the moral shallowness of our political arena. Note the disparity of their views in this excellent 8 minute video interview ~ https://www.youtube.com/watch?v=e0rojYMx5c4

Above all, Hugo Chavez was a man of the people and had a fondness for the south Bronx of New York. On one of his trips to the UN, Representative José E. Serrano, a Democrat from the South Bronx, invited him to the neighborhood. As Frances Robles writes in the New York Times ~ " Mr. Chávez, the congressman said, made it clear he did not want to visit “power brokers.”  Instead, he spent several hours one September morning greeting local leaders at a community development corporation, where tables were set up and various groups distributed brochures as if the event were a college fair at a high school.
Mr. Chávez stopped to chat with neighborhood advocates one by one, several people recalled, impressing everyone with his uncanny ability to recall obscure historical facts about each person’s home country… We expected, honestly, for him to walk through, say a few words and leave,” Mr. Serrano said. “Three and a half hours later, he was still there. ‘What’s the name of your organization? What do they do? How are you funded? Why did you name it that?’ He did this table by table by table. Then he would quote a poet, artist, politician or historical figure from Panama, Mexico, the Dominican Republic or wherever the person was from.”  He left people with the impression that he had looked at the South Bronx, saw the slums of Caracas and fell in love with the place. He ended the morning dancing with a straw hat perched on his head. Out of that visit was born a community-relations program that would donate $5 million to grass-roots groups in the South Bronx, paying for a variety of projects, including the restoration of the Bronx River, after-school classes, literacy programs and food cooperatives." See article ~ http://www.nytimes.com/2013/03/07/nyregion/in-the-south-bronx-memories-of-chavez-and-his-largess.html?emc=eta1 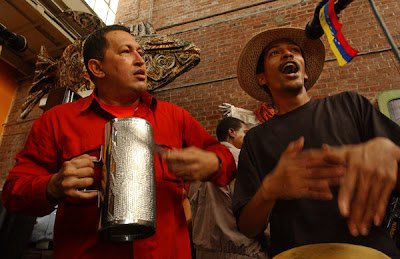 President Hugo Chávez of Venezuela, who died this week, playing percussion on the guira with Omar Freilla of the band Palol Monte during a visit to the South Bronx in 2005.

“Here was a guy who the corporate media tried to push us to dislike by saying, ‘This guy is trying to empower himself forever,’ ” said Julio Pabon, a City Council candidate who participated in a Citgo-financed food co-op. “That’s not how we saw him in the Bronx. In the Bronx, he was a guy who came here and talked about helping people so they didn’t get strung out trying to pay their heating bills.”
Here's some of Chavez's most colorful quotes which endeared him to many, including myself, for indeed he was a fearless revolutionary and truth teller in a time of worldwide apathy and deception;
“Remember, little girl, I’m like the thorn tree that flowers on the plain. I want my scent to passers-by and prick he who shakes me. Don’t mess with me, Condoleezza. Don’t mess with me, girl.” — Chávez, to then U.S. Secretary of State Condoleezza Rice, in 2006

“A building never collapses like that, unless it’s with an implosion.” Chavez in 2006 reacting to a television report investigating a theory that the U.S. government was behind the terrorist attacks on the Twin Towers
“Go right to hell.” “You are a pawn of imperialism.” To British Prime Minister Tony Blair in 2006


Chavez was right on many counts and particularly on Bush and Iraq. "There were never weapons of mass destruction but Iraq was bombed, and over U.N. objections, (it was) occupied and continues being occupied," Chavez said. Bush alleged that Iraq possessed weapons of mass destruction but none have been found, shattering one of his main arguments for going to war. That's why we propose to this assembly that the United Nations leave this country (USA), which is not respectful of the very resolutions of this assembly," Chavez said.


As we come up to the 10th anniversary of the Cheney/Bush illegal attack on Iraq ~ history will show that it was indeed the worst mistake in U.S. history. Peter Van Buren elaborates on this mistake ~   "I was there. And “there” was nowhere. And nowhere was the place to be if you wanted to see the signs of end times for the American Empire up close. I stood at Ground Zero of what was intended to be the new centerpiece for a Pax Americana in the Greater Middle East. Not to put too fine a point on it, but the invasion of Iraq turned out to be a joke…In case you want to jump to the punch line, though, it’s this: by invading Iraq, the U.S. did more to destabilize the Middle East than we could possibly have imagined at the time. And we -- and so many others -- will pay the price for it for a long, long time."  See article  www.tomdispatch.com/blog/175658/

The lion may be lying in state but the truth still lives, the revolution will continue on and there will be other lions who will carry the banner of nonviolent progressive social change and South America's regional integration. Allen L Roland is a practicing psychotherapist, author and lecturer who also shares a daily political and social commentary on his web log and website allenroland.com He also guest hosts a monthly national radio show TRUTHTALK on www.conscioustalk.net
Posted by Allen L Roland, Ph.D at 11:46 AM