THE GREATEST BATTLE OF ALL TIME / STALINGRAD 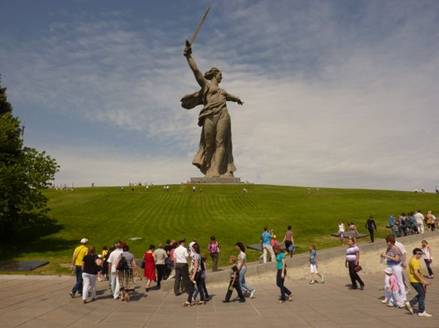 Mamayev Kurgan is a war memorial like no other on earth ~ for it is dominated by an angry goddess. The most gigantic, impressive and eerie statue in the world, Rodina-Mat, the Mother Goddess of Russia, touts up 160 feet without any pedestal, 20 feet higher than the Statue of Liberty ~ it is the resting place for 35,000 Soviet soldiers who died defending their city, their country and eventually the world.

Saturday, Feb. 2 marked a very obscure date for Americans, but one that saved the lives of hundreds of thousands of young American boys in World War II ~ it is the 70th anniversary of the final surrender of German forces at Stalingrad ~ The decisive battle of World War II
I was only nine years old when the invincible German sixth army was decisively beaten in the battle of Stalingrad and the tide of World War II permanently changed.

Here's a six minute video clip of what the fighting looked like at Stalingrad in the middle of the Winter ~ https://www.youtube.com/watch?feature=endscreen&v=OVvoo1qFPDo&NR=1

I vividly remember the shock and elation of that event even as a young child in Nahant, Massachusetts ~ for quite suddenly a glimmer of  world wide hope replaced the growing despair of watching an apparently invincible German Wehrmacht, that had conquered the entire European continent in less than three years, brought to its knees by the courageous Russian defenders of Stalingrad.

Americans have never had to defend their country from a fierce fighting force intent on occupying them such as Russia endured in World War 2 ~ so to truly understand the depth of Russian patriotism, as well as other occupied countries and states, we must understand the battle and triumph of Stalingrad against insurmountable odds.

The human cost was truly horrific, as Martin Sieff explains in his commemorative article entitled ~ The Greatest Battle of All Time ~ and Why It Still Matters Today.
Excerpt: "The colossal scale of the fighting between Nazi Germany and the Soviet Union in what Russians call the Great Patriotic War was well recognized by Americans and Britons at the time but it has been virtually forgotten since. But it dwarfed every other battlefront of the war combined. Eight out of 10 German soldiers killed in World War II died fighting the Red Army. The colossal total of nearly 27 million Soviet military and civilian dead was more than twice the death toll of all Americans, Britons, Commonwealth, French and even Germans killed in the war combined.... According to British military historian Anthony Bevoir, 1.1 million Soviet soldiers died in the Battle of Stalingrad and that does not include the at least 100,000 and possibly three times as many civilian inhabitants of the city massacred by the repeated waves of indiscriminate Luftwaffe air attacks….Nazi losses were colossal, too. According to Russian estimates, 1.5 million German and Axis soldiers lost their lives in the entire campaign, more than five times the entire U.S. combat dead for all of the war and more than twice the combined Union and Confederate dead of the entire U.S. Civil War."

The Russian triumph at Stalingrad rapidly led to a German retreat and the inevitable encirclement of Berlin by allied forces. Here's the scene in the German film Downfall, where Hitler finally realises he is defeated in Berlin, and lets out his anger on his Generals. This is the original video, parodied so many times on Youtube ~ the film is excellent and English Soft Subs/Closed Captions are available, look at the bottom right. 4 minute video ~
https://www.youtube.com/watch?v=t7PmzdINGZk

My point here is that patriotism that is grounded in overcoming a foreign invader ~ such as Russia's victory at Stalingrad ~ is far more formidable than just waving flags and singing anthems. America should be conscious that our illegal occupations of Iraq and Afghanistan have resulted in millions of civilian deaths and displacements. More importantly they have also become the breeding ground of patriotic freedom fighters who can no longer be labeled insurgents or terrorists ~ who we use to justify even more military spending.

And who is paying the cost of roughly 3 trillion dollars for these illegal wars and occupations?
American families are now paying at least $20,000 each for these occupations (including the hidden social costs) with no end in sight.

It's the biggest bubble of all ~ The so-called US government takes our money;
Then gives it to corporate thieves and uses it to create mayhem around the world.
We are poorer for it.
Our children are poorer for it.
The nation is poorer for it.
It's really no more complicated than that.
See three minute video http://www.brasschecktv.com/videos/war-is-a-racket-1/what-the-war-costs-1.html

Now, 70 years later, the apparently invincible American  Wehrmacht, as recently represented by Vice President Joe Biden, set the record straight at the annual Munich Security Conference ~ as reported by WSWS ".. not only is this decade-long exercise in US militarism not ended, it is about to erupt in a whole number of new areas across the globe, threatening the lives of countless millions of people." See article ~ http://www.wsws.org/en/articles/2013/02/05/pers-f05.html


"The greatest threat to our world and its peace comes from those who want war, who prepare for it, and who, by holding out vague promises of future peace or by instilling fear of foreign aggression, try to make us accomplices to their plans." ~ Hermann Hesse

Allen L Roland is a practicing psychotherapist, author and lecturer who also shares a daily political and social commentary on his web log and website allenroland.com He also guest hosts a monthly national radio show TRUTHTALK on www.conscioustalk.net
Posted by Allen L Roland, Ph.D at 11:24 AM