GLOBAL WARMING IS HERE AND NOW / CLIMATE CHANGE A STEP BEHIND

Global warming is here and now and major climate change is a step behind. Many experts claim we will see a near ice-free arctic within 10 years. That would usher in rapid permanent climate change resulting in extreme weather events such as severe drought, massive flooding, prolonged cold spells and insufferable heat spells: Allen L Roland


Rapid global warming and the sea ice collapse  (see article) http://readersupportednews.org/news-section2/312-16/16045-sea-ice-volume-has-collapsed  will also lead to the disintegration of the Greenland ice sheet and the release of the vast amounts of carbon currently locked in the permafrost ~ which will in turn intensify global warming. The facts are there ~ see Arctic Sea Ice Collapse 1979-2012 (PIOMAS) I min video  http://www.youtube.com/watch?feature=player_embedded&v=GetB-xs9D_A

We are all interconnected on a soul level and that particularly applies to Nature. Nowhere is that more obvious than when you watch the recent NOVA special, "Earth from Space"  See video

This space-based vision of our planet is a spectacular story of interaction and connectivity but when you see through the heart ~ that same interaction and connectivity exists on a human heart-based soul level.
But we humans have devastated our planet Earth and our karmic debt is coming due. It will come in the form of severe climate change and it will eventually force us to surrender to our deepest innate urge to cooperate and unite with each other.

In Overheated, Guzman takes climate change out of the realm of scientific abstraction to explore its real-world consequences. He writes not as a scientist, but as an authority on international law and economics. A hotter world, writes Guzman, will bring unprecedented migrations, famine, war, and disease ~ It will be a social and political disaster of the first order.

Already we can see how it will work: The ten warmest years since 1880 have all occurred since 1998, and one estimate of the annual global death toll caused by climate change is now 300,000. That number might rise to 500,000 by 2030. Guzman shows in vivid detail how climate change is already playing out in the real world. Rising seas will swamp island nations like Maldives; coastal food-producing regions in Bangladesh will be flooded; and millions will be forced to migrate into cities or possibly "climate-refugee camps." Even as seas rise, melting glaciers in the Andes and the Himalayas will deprive millions upon millions of people of fresh water, threatening major cities and further straining food production. Prolonged droughts in the Sahel region of Africa have already helped produce mass violence in Darfur.
Here are the facts on Global warming in the United States. More than 3,500 U.S. weather records were smashed in 2012 ~ this interactive map shows extreme temperatures, rainfall, floods, wildfires and floods in 2012 ~ 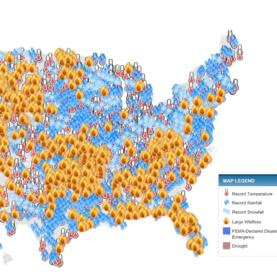 " Tennessee and Wisconsin lead the list of states that had the highest percentage of reporting stations that logged new heat records, at 36 and 31 percent, respectively. March 2012 was the hottest March on record across the contiguous U.S., and July was the hottest single month ever recorded. Last summer also produced the worst drought in 50 years across the nation’s midsection; 1,300 counties in 29 states declared drought disaster areas. And wildfires burned more than 3.7 million hectares nationwide; the average fire size was 65 hectares, far exceeding the 2001-2010 average of 35 hectares."  See article ~ http://www.scientificamerican.com/article.cfm?id=thousands-of-us-weather-records&WT.mc_id=SA_CAT_ENGYSUS_20130117

A draft report from NCA (The National Climate Assessment), released in January 2013, provides the clearest evidence of the real effects of global warming and the resultant climate change in the form of extreme weather that is sure to follow ~  " Future generations of Americans can expect to spend 25 days a year sweltering in temperatures above 100F (38C), with climate change on course to turn the country into a hotter, drier, and more disaster-prone place…. The 1,000-page NCA report, the work of the more than 300 government scientists and outside experts, was unequivocal on the human causes of climate change, and on the links between climate change and extreme weather."  See article ~ http://readersupportednews.org/news-section2/312-16/15535-a-hotter-drier-and-more-disaster-prone-america

Global warming is here and now and can no longer be denied but extreme weather and climate change will soon fully expose our selfish corporate folly and denial ~ but it will not be a painless transition. Just look at what happened in Australia in January of this year when wildfires raged and temperatures reached so high that the Australian Bureau of Meteorology had to extend its extreme temperature limit, adding new pink and purple colors to forecast maps to allow for temperatures of above 54C (129F).  See 2 minute video
https://www.youtube.com/watch?v=du2plw_LxT0

In regards to the obvious need for an action regarding climate change ~ I completely agree with this quote by Robert Stavins, the head of Harvard’s Environmental Economics program: "It’s unlikely that the U.S. is going to take serious action on climate change until there are observable, dramatic events, almost catastrophic in nature, that drive public opinion and drive the political process in that direction."