THIS WEEK WE ARE ALL PALESTINIANS 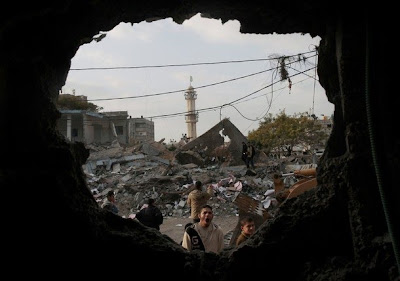 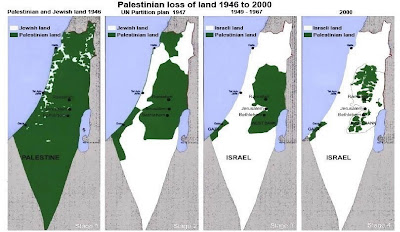 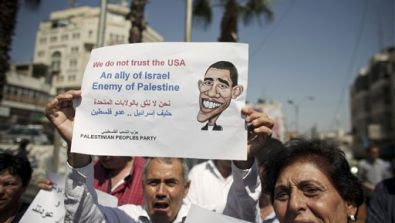 This week the United States Middle East hypocrisy will be viewed by the world. After 44 years of illegal military occupation by Israel, Palestine is reaching out to the world for recognition and statehood even though their bid for statehood at the UN Security Council will surely be vetoed by Obama. Our ongoing support for this glaring example of unjust Apartheid is still the number one reason America is not trusted in the Middle East and throughout the world: Allen L Roland

Here’s the graphic evidence of Israel’s illegal occupation of Palestine but this map does not show the approximately 600 roadblocks and check points in the West Bank as well as the infamous Separation Wall.

Israel's Separation Barrier, dubbed the "Apartheid Wall" or "Berlin Wall" by Palestinians, has increasingly attracted international media attention, largely due to the hard-to-ignore scale of the project. The most obvious historical parallel to the barrier is the Berlin Wall, which was 96 miles long. Israel's barrier, still under construction, is expected to reach at least 403 miles in length ( About the distance from SF to LA ) The average height of the Berlin Wall was 11.8 feet, compared with the maximum* current height of Israel's Wall ~ 25 feet.

Israel's Apartheid barrier is therefore planned to be four times as long and in places twice as high as the Berlin Wall. The World Court calls it a gross violation of international law and basic human rights ~ yet Israel is continuing to build the wall in several regions of the West Bank. Also note that The Wall encompasses more than 50 Israeli civilian settlements in the Occupied Territories, in which the majority of Israeli settlers live and which are illegal under international law ~ which notes that security exceptions in international humanitarian law cannot be invoked to justify measures that benefit unlawful civilian Israeli settlements at the expense of the occupied Palestinian population.

And then there’s Israel’s Palestinian concentration camp, Gaza ~ note the Bombed out Gaza street with Israeli surveillance tower in background

The Gaza Strip lies on the Eastern coast of the Mediterranean Sea. The Strip borders Egypt on the southwest and Israel on the south, east and north. It is about 25 miles long, and between 4 to 7.5 miles wide, with a total area of 140 square miles. The territory takes its name from Gaza, its main city.

Ellen Cantarow confirms in AlterNet, that Gaza is a Concentration Camp ~ “Gaza is an immense concentration camp ~ 1.5 million people squeezed into 140 square miles hemmed in on all sides by 25-foot-high walls separated by a vast expanse of bulldozed earth. The 2005 "pull-out" left Gaza still controlled by Israel from air and sea, its entries and exits prisonlike mazes electronically controlled and under constant surveillance. Bombing it, assaulting it with tanks and Uzis, is like shooting animals in a pen. The claptrap about "pinpoint" accuracy and "avoiding civilians" is a lie so flagrant, so transparent, that any child ~ certainly any Gaza child ~ could grasp it ...”

“There have been eight military assaults on Gaza since 2004; blockades started in 2005, and then a siege of medieval proportions in 2006, collective punishment for Gazans' having elected the wrong party for Israel and its U.S. patron….By December 2008, Richard Falk, special reporter on the Occupied Territories for the United Nations, reported an overall Gaza malnutrition rate of 75 percent, a childhood anemia rate of 46 percent and a devastated infrastructure. (For more, see Richard Falk's "Understanding the Gaza Catastrophe.")”

“The latest war -- called Operation Cast Lead ~ is the "holocaust" promised by Israel's Deputy Defense Minister Matan Vilnai in 2008 when he said Israel would create a ‘shoa’ if Qassem rockets kept dropping on Israeli towns like Sderot.

Shoa, Hebrew for holocaust, is a serious word denoting the extermination of an entire people. Vilnai embarrassed the Israeli government, and no official has used the term since…. The Israeli human rights organization B'tselem reported 900 Palestinians killed, with more than 4,200 injured. The Israeli toll: three civilians and seven soldiers killed, more than 82 civilians and 61 soldiers injured. As for Israeli civilians killed by rockets, the Israel Project lists 25 dead during the past seven years…. “

“Operation Cast Lead is one of the great war crimes of our era. It was planned six to 18 months in advance, according to journalist Jonathan Cook. The war design "required directing artillery fire and air strikes at civilian neighborhoods from which rockets were fired ~ despite being a violation of international law. Legal advisers, Barak noted, were seeking ways to avoid such prohibitions, presumably in the hope the international community would turn a blind eye."

So to President-elect Barack Obama in his silence; to our senators and representatives who obediently parrot American Israel Public Affairs Committee's ( AIPAC) lines, forgiving the occupier and blaming the occupied, I'd address European Parliament member Luisa Morgantini's closing words in her open letter to European leaders:

"Israel has a right to exist as a normal state, a state for its citizens, along the 1967 borders, much wider than those of the partition plan passed by the United Nations in 1947. But I would have liked to hear your outrage and your humanity, and to hear you shouting for the pain of so many deaths and so much destruction, for such arrogance, for so much inhumanity, for so many violations of international and humanitarian law … "My God, what a terrible world we live in!" See full report http://www.alternet.org/audits/120197

Around 6,000 Palestinians remain in Israeli prisons, many after unfair military trials. Israeli conscientious objectors to military service continued to be imprisoned. http://www.amnestyusa.org/research/reports/annual-report-israel-and-the-occupied-palestinian-territories-2011#.TnVymSwwq_k.email

This week we are all Palestinians demanding freedom and statehood ~ but as Palestine pushes for statehood, Israel finds itself increasingly isolated and rightfully condemned by its Middle East neighbors. Turkey Prime Minister Recep Erdogan is an excellent example ~ Erdogan recently said in a Sept. 13 speech to the Arab League that Israel must "pay a price for its aggression and crimes" and that supporting Palestinian statehood was "not a choice but an obligation." Israel, he said, is "the West's spoiled child."
Read more: http://www.time.com/time/magazine/article/0,9171,2093351,00.html#ixzz1YPqKf0qf

Here are five practical reasons why the US should support the Palestinian bid and not exercise its veto at the UN ~ besides the obvious moral reason ( courtesy of Resa Aslan, LA Times ) See article ~ http://readersupportednews.org/opinion2/289-134/7484-yes-to-palestine

2. The current Likud-led Israeli government is unlikely to ever agree to a sovereign Palestinian state.

4. Contrary to popular belief, it is not political suicide to defy the will of Israel.

5. The Palestinians are doing almost exactly what Israelis did 60 years ago. “In 1948, after the UN voted for the partition of Palestine, debate among the world powers about how to divide the land dragged on and violence between Jews and Arabs grew worse. The Jewish Agency simply pre-empted negotiations and unilaterally declared the state of Israel; the United States immediately recognized it, and the UN accepted Israeli sovereignty the following year.”

Regarding the current Palestinian statehood bid; Tony (political whore) Blair is acting ‘like an Israeli diplomat' and has earned the full fury of Palestinian leaders after he was accused of blatant pro-Israel bias for his role in attempting to derail their bid for statehood at the UN. See report ~ http://tgr.ph/nwxRcM

In summary, are we not committing the same moral crimes in illegally occupied Iraq and Afghanistan as the Israelis are doing in Palestine ~ forgiving the occupier and blaming the occupied for the continuing bloodshed and civilian deaths. We all have blood on our hands in the Middle East and granting statehood to Palestine would be an important step toward restoring our severely damaged international credibility, moral integrity and self respect as well as bringing the world closer to peace.