9/11 FILM THE GOVERNMENT DOES NOT WANT YOU TO SEE 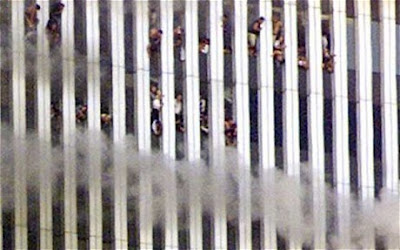 This is the British made film the Cheney/Bush administration did not want you to see and for good reason. The film THE FALLING MAN explores in depth the human tragedy of that day whereas the Main Stream Media airbrushed the human cost and concentrated instead on selling heroism and a carefully orchestrated false flag terrorist scenario: Allen L Roland

110 stories high, and a distance of over 1,300ft, it was impossible at first to see what it was that was falling from the north tower at street level. One witness said it looked like confetti but instead it was human beings desperately trying to escape the searing heat and chocking smoke at the top of the north tower ~ many desperately jumping toward fresh air and certain death.

Thomas Dallal, a photojournalist at the time, was on the ground near the North Tower. He put a long lens on his camera and began snapping away at the uppermost floors. One of his photographs, later to be named “Impending Death”, has become an iconic image from that day. It shows scores of figures leaning out of the broken windows of the North Tower shortly before it was obviously imploded by planted explosives.

A nation’s media stroked anger at that time has now,10 years later, turned to sadness and reflection as well as increasing doubt over what really happened on that infamous day ~ and who was really responsible. Americans are no longer satisfied with the discredited 9/11 Commission’s airbrushed official version of events, where both Cheney and Bush were never questioned under oath, and are now seemingly ready to face the brutal truth of that day as well as the true criminal perpetrators and enablers of 9/11.

The first step towards the truth is fully facing the emotional reality and human cost of what happened on that day. In that regard, I watched again last night the brilliant and moving must see (70 minute) video THE FALLING MAN which has still not been released in the U.S. and which can be seen by clicking on ~ Video http://www.informationclearinghouse.info/article17405.htm

· Note also in this video at the 23:48 minute mark ~ detonation flashes are clearly seen below the smoke as the North Tower begins its collapse.

· The video also interviews the recipient of the last known phone call from the north tower whose trapped and frantic husband told her that people were jumping from the burning floors above him as he lay huddled in fear.

· Finding the falling man humanized 9/11 and helped me feel the full scope of this human tragedy as well as deepened my commitment to find the truth.

Only the truth of 9/11 can rescue us from the moral quagmire we have engaged in for the last ten years but it will take countless Americans demanding that truth. I’m one of them ~ are you?

This additional brief 9 minute video is a reminder of the two most compelling issues of the 9/11 conspiracy which must still be addressed ~ Video http://www.youtube.com/user/alawson911

It is not necessary to bury the truth.
It is sufficient merely to delay it until nobody cares: Napoleon Bonaparte