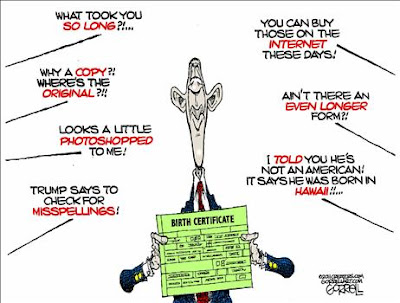 Beneath the Obama birth certificate hoopla lies a far deeper issue that the majority of Americans feel Obama is a fraud and a shill for Wall Street and the financial elite. Little has been done by Obama to dispel that mistrust and now even his recently disclosed birth certificate appears to be a fraud along with Bin Laden’s recent death: Allen L Roland

President Obama can now finally claim he delivered on a promise with his public announcement four years ago that “We will kill Bin Laden” but it is common knowledge in intelligence circles that Bin Laden died in December, 2001 due to an untreated lung complication, the Pakistan Observer reported, citing a Taliban leader who allegedly attended the funeral of the Al Qaeda leader. Bin Laden, according to the source, was suffering from a serious lung complication and succumbed to the disease in mid-December, in the vicinity of the Tora Bora mountains. http://www.foxnews.com/story/0,2933,41576,00.html

More importantly, Osama bin Laden never claimed to be the "mastermind" or "intellectual author" of the 9/11 attacks, and there was never any proof provided that he was. Responsibility for the 9/11 attacks was assigned to him by a number of governments (most prominently, the US and Israel) and the mainstream media.

Obviously, Obama is still fraudulently shilling for the so called War On ( Of ) Terror in a blatant attempt to cover up his many false promises of 2007. It’s also obvious that Bush, Cheney and eventually Obama all knew of Bin Laden’s death but used him as an excuse for their illegal military excursions and empire building. The bottom line is ~ if it was Osama bin Laden who was killed, then the body would have been put on public Display, and since that wasn’t done, then the body wasn’t his. Not that it will matter in the U.S. where the sheeple are waving flags and celebrating their latest bamboozle by the Obama administration.

The reason for the burial at sea is to hide the fact that Osama Bin Laden actually died in late 2001 and they were keeping his legend alive for propaganda purposes. The scam is so obvious that it’s ridiculous ~ but as Joseph Goebbels, Nazi Minister of Public Enlightenment and Propaganda, once said ~ “ You keep up your lies, even at the risk of looking ridiculous” because the people are afraid of the truth and its implications. Obama is desperate for a victory of any sort but this one will be short lived because of its political timing and obvious questionable authenticity.

Bin Laden’s assassination, quite simply, is a hoax and Al Qaeda is a CIA inspired myth; never in living history has a man died so many times. I assume this is the last time but the germ of this on going hoax is the 9/11 cover up which continues to this day. Pandora’s Box is finally opening ~ Must see Nine minute Video: http://www.brasschecktv.com/page/1092.html

The current hard truth is that President Obama’s broken campaign promises have not only eroded his progressive and Independent base but have dropped his approval ratings to new lows. 71% of Likely U.S. Voters say the country is heading in the wrong direction, according to a new Rasmussen Reports national telephone survey taken the week ending Sunday, April 24 ( Pre Bin Laden Hoax ) Voter confidence that the nation’s best days are still to come has also fallen to its lowest level ever and a plurality of voters believes that most members of Congress are corrupt.

The Rasmussen Reports daily Presidential Tracking Poll for Thursday shows that 22% of the nation's voters Strongly Approve of the way that Barack Obama is performing his role as president. Thirty-eight percent (38%) Strongly Disapprove, giving Obama a Presidential Approval Index rating of -16 and that figure has been continually sliding.

And another problem is that 52% of Americans want a new leader and deeply mistrust the President who promised change and did not deliver but instead hitched his wagon to Wall Street and the financial elite and left Main Street to pay the price for the administration’s excessive and unpopular bailouts. Trillions of American taxpayer dollars were given, in secrecy, to the banks/people who were most responsible for causing the financial crisis in the first place ~ and all in great secrecy.

There is real anger in the streets toward Obama and it’s not just the Tea Party ( the new name for the hard Christian right ) but also extends through all genders and age groups who generally feel both abandoned and betrayed by Obama’s broken promises.

Obama’s billion dollar re-election campaign is meant to scare off a solid progressive candidate or Independent in the primaries. Obama can be beat within his own party with the right candidate ~ he’s that vulnerable. With the price of gas heading towards an eventual $5 a gallon, many voters are beginning to finally realize that President Obama is running on empty promises.

Where Obama was actually born is the least of our problems.

It's a digital creation!

Which means ~ it's a fraud.

Here's the detailed analysis from BrasscheckTV

And why am I not surprised?

It appears that in attempting to close the door on this birth certificate issue, Obama has opened the door on a far greater issue ~ which is the significant loss of trust Americans have with his presidency. The Bin Laden death fraud reinforces this issue and opens other doors which will eventually lead to the 9/11 cover up.

As Mike Whitney explains ~ “The fact is, Bin Laden is just an inconsequential cog in the mighty machinery of state propaganda. This has more to do with "perception management" than terrorism. Bin Laden just provides a credible rationale for pursuing policies that are contrary to the public's interest. Any Hollywood-type villain would have done just as well. (Although it does help that he's a Muslim and 75% of the world's remaining oil reserves are located in countries that are predominantly Islamic)” See full story http://www.informationclearinghouse.info/article28008.htm

Unfortunately, it is apparent that our real government consists of unelected bankers and corporate special interests. The argument regarding Obama’s birth certificate legitimacy pales in comparison to the growing realization that the entire office of the president has been usurped for at least 2 decades by Wall Street and the corporate elite~ and Obama takes his orders from them and most certainly not from the American people. As such, do not believe anything Obama says as he tries to justify his re-election as President. These are words I once said about George W Bush and they were proven correct.