MEMO TO THE PRESIDENT / FROM DICK CHENEY 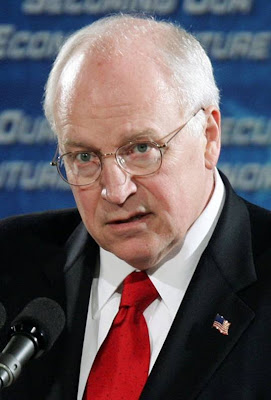 From deep inside his self imposed Bunker, Dick ‘Darth Vader’ Cheney emails President Obama with advice on walking on the dark side and useful counsel regarding lies, deceptions and end game strategies. In a world of growing deceit and political manipulation ~ quite often only satire is capable of disseminating the truth. Wake up, America, we’re obviously still being bamboozled : Allen L Roland

From: Dick Cheney ( currently working on his memoirs tentatively titled My Ride On The Dark Side )

Congratulations on your visit to the dark side, Barack ~ as witnessed by your recently staged but increasingly bungled assassination of Osama Bin Laden. Of course, we both know that Bin Laden died in 2001 of a natural death from Kidney failure but who cares about the truth ~ it’s the myth that counts whether he or it is dead or alive ~ think Al Qaeda (chuckle).

By the way, those Pentagon released videos are really pretty feeble (chuckle) ~ Particularly the one supposedly showing Bin Laden watching himself on TV ~ The guy with the remote isn't recognizable, you cannot actually see what’s on the TV screen ~ and according to the FBI, the real Osama was left-handed, while the man in the video is using his right hand for the remote control ~ Whose producing this junk?

If you’re going to ride on the dark side, for God sake don’t ride side saddle !

You must recall that the Washington Post reported last year on how CIA officials recruited “darker-skinned employees” to create fake Bin Laden tapes. The fact that the CIA created fake Bin Laden tapes is an admitted fact, not a conspiracy theory ~ which obviously negates the authenticity of these videos. So your Dubious Bin Laden “Home Movies” are identical to tapes released 4 years ago by Pentagon Front Group ~ here’s the story http://www.infowars.com/hoax-white-house-claims-4-year-old-bin-laden-tapes-are-new-footage/

Your story line is unraveling faster than a speeding bullet, Barack ~ In a BBC News report, Orla Guerin interviewed dozens of people who were adamant that Bin Laden did not live in the compound, with none of them ever witnessing him or hearing rumors that he was there in the five years that Obama claimed Bin Laden was a resident in the town.“It’s all a fake, nothing happened,” said a newspaper seller who has been working in the town for 50 years. Another resident told Guerin that the man seen in the video footage of Osama allegedly flicking between television channels is in fact his neighbor, not Bin Laden.“His name is Akhbar Han, he owns the house they said was Osama’s house, I know him very well,” the man stated. Two minute BBC video http://www.bbc.co.uk/news/world-south-asia-13329078

And yesterday, Iran's intelligence minister, Heidar Moslehi said “We have accurate information that bin Laden died of illness some time ago”.

Jeezus, Boy ~ You’re better off now not releasing any more of those obvious Bin Laden video re-runs and play the patriotism card in light of your lack of any direct evidence of a Bin Laden kill. Remember, there was no question that we, of course I mean our Iraqi puppet government, hanged Saddam ~ now those were really grisly pictures (sneer ) and we were not afraid to show them to the sheeple.

If you’re going to sell a lie, you’d better build the personal drama and call it the longest 40 minutes of your life ~ remember your credibility and re-election is on the line, Boy! And no more staged ‘Situation Room’ photos ~ you looked like they just pulled you off the golf course, which apparently really happened, and Hillary looks like she’s stifling a yawn (chuckle).

You’re also obviously aware that we’ve always wanted to prolong the bogus War on Terror for as long as possible. Now that most of the sheeple are aware of the fact that the War on Terror is a complete fraud, it becomes especially important to keep the game going and this Bin Laden event should serve that purpose if you milk it for all its worth ~ think 9/11 (chuckle).

Suggestion ~ Continue to surround yourself with cheering troops like you did last weekend at Fort Campbell with the Airborne saying “Job, well done ! Remember, you’re the Commander In Chief ~ as I once was (wistfully) Whoops ! Don’t tell that to George W !

For your information ~ David Ray Griffin’s book titled, “Osama Bin Laden: Dead or Alive?” written in 2009 provided convincing objective and testimonial evidence of his mid-December 2001 death, of natural causes, not a commando hit squad getting their man ~ but the Main Stream Press has thankfully squashed that information and hopefully they’ll continue to do the same now.

Getting rid of the forensic evidence by supposedly throwing Bin Laden in the sea was original at best although risky since there is no actual body ~ but the sheeple will buy it just like they never investigated why all of the ground zero steel was sent off to Taiwan and South Korea after 9/11 ~ no forensic evidence, no case ( chuckle ). You might even want to demolish the compound in Abbottabad while your at it ~ again, no crime scene evidence protects your butt ~ remember how Rudy Giuliani recycled and shipped the steel (evidence) from the exploded WTC. ( Rudi’s a blatant and corrupt kiss ass but he came through for us that day )

I also like the idea that you are admitting that torture was necessary to get the necessary intelligence information for this Bin Laden hit ~ it takes some legal pressure off of George W. and myself in regards to our work on the dark side. Do remember your promise to us about not opening any investigation into torture, rendition or our treatment of prisoners at Guantanamo. What the Guantanamo files recently released by WikiLeaks show is that the claims we made about the threat the detainees posed to the US and its allies and interests was simply untrue ( a lie ) and although we knew the prisoners were innocent, we refused to set them free because of the political repercussions that would have ensued. That’s dangerously close to the truth boy, I mean Mr. President, and it can’t go any further or our whole 9/11 cover story will begin to unravel ~ since most of those 9/11 confessions were torture induced. As I said last Sunday, I would reinstate the practice of water boarding if I were president or as you would say enhanced interrogation methods (chuckle).

Speaking of 9/11 ~ Beware of this Dr. Steve R. Pieczenik fellow ~ He’s held numerous different influential positions under three different Presidents and still works with the Defense Department, and he alarmingly told The Alex Jones Show yesterday that Osama Bin Laden died in 2001 and that he was prepared to testify in front of a grand jury how a top general told him directly that 9/11 was a false flag inside job.

Pieczenik cannot be dismissed as a “conspiracy theorist”. He served as the Deputy Assistant Secretary of State under three different administrations, Nixon, Ford and Carter, while also working under Reagan and Bush senior, and still works as a consultant for the Department of Defense. A former US Navy Captain, Pieczenik achieved two prestigious Harry C. Solomon Awards at the Harvard Medical School as he simultaneously completed a PhD at MIT.

Here’s what he had to say about your recent Bin Laden hit ~ “This whole scenario where you see a bunch of people sitting there looking at a screen and they look as if they’re intense, that’s nonsense,” referring to the images released by the White House which claim to show Biden, yourself and Hillary Clinton watching the operation to kill Bin Laden live on a television screen. “It’s a total make-up, make believe, we’re in an American theater of the absurd….why are we doing this again….nine years ago this man was already dead….why does the government repeatedly have to lie to the American people,” asked Pieczenik. “Osama Bin Laden was totally dead, so there’s no way they could have attacked or confronted or killed Osama “said Pieczenik, joking that the only way it could have happened was if special forces had attacked a mortuary.

That’s a dangerous question, and you and I know the answer ~ if the American people knew the whole truth, starting with 9/11, we’d be in Guantanamo and that includes you too, Mr. President.

Unfortunately, Barack ~ Pieczenik’s assertion that Bin Laden died almost ten years ago is echoed by numerous intelligence professionals as well as heads of state across the world.

Pieczenik unfortunately correctly stated ~ “ Bin Laden was used in the same way that 9/11 was used to mobilize the emotions and feelings of the American people in order to go to a war that had to be justified through a narrative that Bush junior and Cheney created about the world of terrorists”.

And again during his interview with the Alex Jones Show last week, Pieczenik also asserted he was directly told by a prominent general that 9/11 was a stand down and a false flag operation, and that he is prepared to go to a grand jury to reveal the general’s name ~ and I unfortunately know who that General is (sigh ).

“They ran the attacks,” said Pieczenik, naming Myself, Paul Wolfowitz, Stephen Hadley, Elliott Abrams, and Condoleezza Rice amongst others as having been directly involved. ( another nervous sigh )

Here’s the link, Barack ~ read it and weep! Remember, you’re supposed to be protecting our butts!

Look Barack, the last refuge for scoundrels is patriotism ~ George and I used it to the max and the sheeple always respond. After this apparent Bin Laden debacle, I’m afraid you’re getting dangerously close to the scoundrel level so play the patriotism card to the hilt ~ visit ground Zero, honor the Navy Seals, hand out medals and start saying 9/11 and Al Qaeda (which we both know is a CIA sponsored myth) at least twice a day and for Christ’s sake ~ wear your America Flag lapel pin as I always proudly do.

Author note: Isn’t this what Eisenhower was warning about in his farewell speech: Beware the Military-Industrial Complex, these are the guys who want nothing more than war from one end of the planet to another because it's how they make money and expand their power.

Or as Paul Krugman, NY Times, correctly writes ~ “We’re paying a heavy price for Washington’s obsession with phantom menaces. By looking for trouble in all the wrong places, our political class is preventing us from dealing with the real crisis ~ the millions of American men and women who can’t find work”

Unfortunately, Carl Sagan’s bamboozle effect still reins in America ~ that is when you have been bamboozled long enough by lies and deceptions, you begin to believe the bamboozle and any evidence to the contrary is either ignored, rejected or you’re no longer interested in finding out the truth. It is, quite simply, too painful to acknowledge, especially to ourselves, that we’re been so credulous or gullible ~ so the old bamboozles (like the 9/11 cover up) tend to persist as the new bamboozles rise (the Bin Laden assassination story).