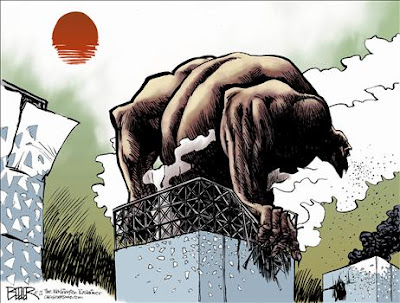 The Main Stream Press continues to ignore Fukushima but the two month catastrophe continues unabated as TEPCO now admits it lied about the severity of the damage to reactor #1 and that a nuclear meltdown has occurred that continues to release deadly amounts of radiation comparable to Chernobyl: Allen L Roland

Over 60 days have passed since the Fukushima nuclear catastrophe but the main stream press continues to downplay the ramifications of this continuing radioactive disaster.

Engineers from the Tokyo Electric Power company (TEPCO) entered the No.1 reactor at the end of last week for the first time and saw the top five feet or so of the core's 13ft-long fuel rods had been exposed to the air and melted down. That’s the first time that Japanese officials have admitted that one of their reactors at the crippled Fukushima Daiichi power plant has had a nuclear meltdown.

Greenpeace has urged Tepco to abandon plans to flood the container with water, given the likelihood that melted fuel has damaged it. Shaun Burnie, nuclear adviser to Greenpeace Germany, said: "Flooding a reactor that has fuel [that has fallen] through the pressure vessel is not a good idea."

Outlining a worst-case scenario, Burnie said very large amounts of cold water hitting the melted fuel could cause an explosion, trigger substantial damage to the reactor and create a "high risk of atmospheric release running for days, if not weeks." He added: "I think [the flooding option] will now be scrapped.

Greenpeace also said significant amounts of radioactive material had been released into the sea and that samples of seaweed taken from as far as 40 miles of the Fukushima plant had been found to contain radiation well above legal limits. Of the 22 samples tested, ten were contaminated with five times the legal limit of iodine 131 and 20 times of cesium 137. Seaweed is a huge part of the Japanese diet and the average household almost 7lbs a year. Greenpeace's warning came as fishermen prepared to start the harvest of this season's seaweed on May 20.

It’s the blind leading the blind in this deteriorating crisis and the Japanese public and the World still does not know the true extent of this growing disaster that definitely has ramifications for the West Coast of the United States and the world in general.

Vivian Norris, Huffington Post, commented recently on the current deadly silence of Fukushima ~ “I received the following email a few days ago from a Russian nuclear physicist friend who is an expert on the kinds of gases being released at Fukushima. Here is what he wrote: "About Japan: the problem is that the reactor uses "dirty" fuel. It is a combination of plutonium and uranium (MOX). I suspect that the old fuel rods have been spread out due to the explosion and the surrounding area is contaminated with plutonium which means you can never return to this place again. It is like a new Chernobyl. Personally, I am not surprised that the authority has not informed people about this.” http://www.huffingtonpost.com/vivian-norris-de-montaigu/deadly-silence-on-fukushi_b_859241.html

Norris ended her article with this appeal ~ “People need answers, data and honest information to help them deal with what is going on. Media blackouts, propaganda and greedy self-interested industries, of any kind, who allow human beings' health to be affected, and deaths to occur, must be stopped now. That senior TEPCO man and the leading nuclear academic in Japan did not break down crying and resign their positions because all was well at Fukushima. Think about it world, and act now before it is too late.”

Arnie Gundersen, was a high level nuclear executive for years and analyzes the information he has been receiving in a calm and scientific way but his latest May 13th ten minute update is worth watching in light of current developments ~ Gundersen reveals that all four reactors are in severe shape and that the “Fukushima Groundwater Contamination is the Worst in Nuclear History". http://ampedstatus.com/video.php