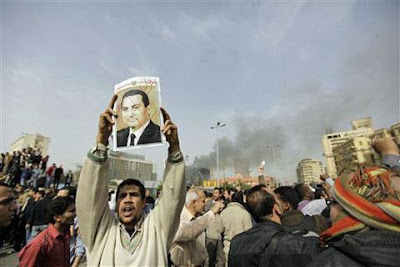 Egypt’s current uprising is a two minute warning for the old world order which controlled the populace by force and US military aid but are now being crushed by growing public dissent and a long simmering desire for true change, individual liberty and political freedom ~ the times are a changing: Allen L Roland

Come gather 'round people
Wherever you roam
And admit that the waters
Around you have grown
And accept it that soon
You'll be drenched to the bone.
If your time to you
Is worth savin'
Then you better start swimmin'
Or you'll sink like a stone
For the times they are a-changin'.

Revolution is in the air and particularly in the Middle East. The flood waters of discontent as well as the desire for true change is rising throughout the world and that includes the United States. President Obama still does not get that millions of Americans voted for true change in 2008 and saw him as a self proclaimed agent of that change. Instead, Obama has offered token change and has become a champion of the status quo as well as the economic and moral abuses of power that were the trademark of the Bush/Cheney administration and the rapidly decaying old World order.

Those waters of discontent are still rising and are fueled by worldwide poverty, unemployment and political disenfranchisement as the rich get richer and the poor get poorer under an obviously outdated old world order ~ which holds onto its power through force, fear and propaganda.

As Charles Angoff once wrote ~ “History is a symphony of echoes heard and unheard. It is a poem with events as verses.”

Well, history is now being made with the recent uprisings in Tunisia and particularly Egypt and its echoes are being heard globally ~ particularly in the middle East. As I have argued for many years, truth and transparency are always the first step in social revolution as well as an eventual evolution in consciousness. The worldwide internet, Wikileaks and other sources have fully revealed the rusting infrastructure of the old world order which still relies on force, economic manipulation and propaganda to maintain its hold over the people. Of course, the Global financial elite see the handwriting on the wall and have chosen Obama to be the interim leader of the transition from the old world order to the new world order ~ with America and the secretive Federal Reserve still firmly in financial control of the restless seething masses seeking true change.

Egypt, however, is a game changer because the truth of Egypt’s role as a key staging post for US military actions and Imperialistic designs in the Middle East is now becoming known to the world ~ as Finian Cunningham writes in Global Research ~ “There is clear evidence from international human rights groups that countless “suspects” rendered by US forces in their various territories of (criminal) operations are secretly dumped in Egypt for “deep interrogation”. The country serves as a giant “Guantanamo” of the Middle East, conveniently obscured from US public interest and relieved of legal niceties over human rights. In collaboration with Israel, and openly described as an “ally” by Tel Aviv, Egypt has shown itself to be the anvil to Israel’s hammer against the Palestinian people. In keeping the Raffah Crossing between Egypt and the Gaza Strip closed, thus denying badly needed humanitarian aid to Palestinians in the aftermath of Israel’s murderous 2009 assault, Mubarak has shown unspeakable callousness and willingness to collaborate with the criminal US/Israeli policy of “collective punishment” of this civilian population.”

Obama is a political pragmatist who is much more comfortable reacting to events versus taking a firm leadership role. He rationalizes his reluctance to initiate needed action by politically straddling the middle which infuriates his dwindling base and emboldens his opposition. Egypt is the perfect example in that Obama concluded that there was no real chance of serious reform under strongman Mubarak and seriously underestimated the rapidly growing secular opposition which has rallied around former U.N. nuclear director Mohamed ElBaradei who clearly sees Washington’s hypocrisy ~ “ The Obama administration has been at best luke-warm towards our cause of democracy ~ Clinton’s statement on Tuesday~ calling Mubarak’s government “ stable “ and that it was responding to the needs and interests of the Egyptian people ~ reflects the Obama policy for the past two years”. That’s the Obama straddle and Mubarak was so emboldened that he staged a rigged parliamentary election last November, setting himself up for re-election, while the Obama administration muted any criticism, as the old world order lumbered on choosing to ignore the growing public dissent and their rightful demands ~ that is, until now! Incidently, ElBaradei is a moderate who doesn't share Washington's allergy to Islamist parties and has publicly questioned the Obama Administration's strategy on Iran's nuclear program.

Obama has done exactly the same political straddle since his election with his failed promises, infuriating his base and emboldening the opposition which led to his devastating defeat in the mid term elections. Let’s get this straight ~ Obama is not a change agent, Obama is a maintainer of the status quo who answers to the financial elite and the old world order. Right now, Obama’s only choice is to embrace change or be eventually overrun by it ~ there is no more room to straddle.

Yes, the times, they are a changing ~ and the truth and transparency of a decaying old world order, based on military force and financial manipulation, is finally becoming apparent to the masses and they are revolting or as Zbigniew Brzezinski recently declared ~ the entire world has become politically awake !

As Jeff Cohen writes in Truthout ~ "For decades beginning during the Cold War, US policy in the Islamic world has been aimed at suppressing secular reformist and leftist movements. Beginning with the CIA-engineered coup against a secular democratic reform government in Iran in 1953 (it was about oil), Washington has propped up dictators, coaching these regimes in the black arts of torture and mayhem against secular liberals and the left.... One of the mantras on US television news all day this Friday was: Be fearful of the democratic uprisings against US allies in Egypt (and Tunisia and elsewhere). After all, we were told by Fox News and CNN and Chris Matthews on MSNBC, it could end up as bad as when 'our ally' ( the Shah ) was overthrown and the extremists came to power in 1979." http://www.truth-out.org/jeff-cohen-fear-extreme-islamists-arab-world-blame-washington67267

Egypt’s corruption goes deep ~ Their vice president Vice President Omar Suleiman was the C.I.A.’s point man in Egypt for renditions ~ the covert program in which the C.I.A. snatched terror suspects from around the world and returned them to Egypt and elsewhere for interrogation, often under brutal circumstances.

In regards to current American policy in the Middle East, Columnist Gilad Altzmon rightfully attributes U.S.’ failed approach’ to a foreign policy that is shaped by Israeli interest and exploited by such Zionist lobbies as the American Israel Public Affairs Committee (AIPAC), so expect more U.S. supported force before Mubarak bends to the demands of the masses in the street. But the die has been cast, meaning a irrevocable choice has been made by the Egyptian people and they will not relent.For example, the Israeli embassy has been shut down in Egypt's capital and its diplomatic staff has been flown to Tel Aviv (allegedly) disguised as tourists.The Star of David has been lowered and is no longer visible anywhere in Cairo.

The times they are indeed a changing ~ but some anticipated it.

Naguib Mahfouz , the great Egyptian writer who won the 1988 Nobel Prize for Literature, wrote of this eventual uprising many years ago ~ We are like a woman with a difficult pregnancy. We have to rebuild the social classes in Egypt, and we must change the way things were.

And it was Teilhard de Chardin who wrote about the chain reaction when the truth finally becomes obvious to all ~ “ Sooner or later there will be a chain reaction, for the truth has to appear only once, in one single mind ( or nation ) for it to be impossible for anything ever to prevent it from spreading universally and setting everything ablaze.”

And the truth is that we are all one with a common urge to unite ( the Unified Field ) which transcends all nationalities, restrictive monarchies and totalitarian regimes. Egypt has just signaled a two minute global warning to the old world order that their controlling days are numbered, the people are marching ~ they will no longer be oppressed ~ they will no longer be a lap dog for the West !

There are moments when history is written not by the powerful, but by the people. This is one of them. The actions of ordinary Egyptians in the coming hours and days will have a massive effect on their country, the region, and our world. Let’s cheer them on with our own pledge to stand with them in their struggle for freedom from oppression:
https://secure.avaaz.org/en/democracy_for_egypt/?vl

If your time to you
Is worth savin'
Then you better start swimmin'
Or you'll sink like a stone
For the times they are a-changin'.