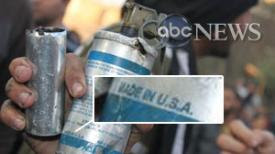 The Egyptian Tsunami of people power is moving so rapidly that the walls of the Old World Order, based on control and military force, cannot hold it in check. The hypocrisy of our selling lethal tear gas canisters to Israel and Egypt to be used to disperse the huge crowds demanding freedom from oppression is indicative of the United State’s morally flawed foreign policy of supporting dictators and suppressing freedom throughout the Middle East: Allen L Roland

It’s Super Bowl Sunday which rings hollow compared to the events that are now rapidly unfolding in the Middle East. American exceptionalism may well be having its last feeble hurrah in Dallas,Texas today where the Steelers meet the Packers ~ for the eyes and ears of most of the world are really trained on Tahrir Square in Cairo, Egypt where US-Israel shared hegemony is having its greatest test against the rising power of the people.

These are heady times in the Middle East as the people of Egypt seize their moment on the world stage and flaunt their demands and grievances to a Middle East audience that has yearned for another choice versus continued oppression from the west and their corrupt puppet governments ~ like Egypt.

What goes around, comes around and the failure of both the Bush and Obama administrations to halt the obvious ethnic cleansing of Palestinians by Israel as well as the murder of tens of thousands of innocent Muslims in Iraq, Afghanistan and Pakistan has rightfully infuriated Muslims throughout the Middle East and does not bode well for Israel and the West.

President Obama is not a change agent, Obama is obviously a maintainer of the status quo who answers to the financial elite and the old world order. Right now, Obama’s only choice is to embrace change or be eventually overrun by it ~ there is no more room to straddle or equivocate as he most assuredly will do now under obvious pressure from Israel and AIPAC.

As the Egyptian Tsunami gains strength, it appears that the Mubarak / Suleiman regime will eventually attempt to keep their power through coercion or force ~ CLG reveals that The International Network for Rights and Development has claimed that Israeli logistical support has been sent to Egypt's President Hosni Mubarak to help his regime confront demonstrations. According to reports by the non-governmental organization, three Israeli planes landed at Cairo's Mina International Airport on Saturday carrying hazardous equipment for use in dispersing and suppressing large crowds. In the statement circulated by the International Network, it was disclosed that Egyptian security forces received the complete cargoes on three Israeli planes which were, it is claimed, carrying an abundant supply of internationally proscribed tear gas to disperse unwanted crowds ~ and made in the United states.

It won’t work because this powerful people Tsunami is fueled by the poor, the youth and the disenfranchised of Egypt who have nothing to lose and long for their voice ~ for quite simply, the masses of the poor have been left behind in Egypt. The middle class has actually gone backward leaving a small financial elite at the top who benefit from whatever economic progress there is. Sounds familiar, doesn’t it ~ the unholy marriage of power and capital which fits the description of the whole capitalist world and in particular, the United States ~ where the Tsunami will eventually reach.

As Roger Cohen writes in the New York Times ~ “ Egypt’s not alone in seeing the gulf between its wealthy and the rest widen; that’s a global trend. But in a country of 83 million where almost 30 percent of the population is still illiterate, and the big bucks have often depended on an entrée to Mubarak’s son, Gamal, or his circle, the pattern has been particularly inflammatory…Egypt had a Western-backed free-market economy run by a family with contempt for freedom: That’s problematic. It puts the global forces concentrating wealth into overdrive in the service of the chosen few… . All of this raises a question: In the name of what exactly has the United States been ready to back and fund an ally whose contempt for the law, fake democracy and gross theft flout everything for which America stands? “

Cohen concludes his article with this telling story ~ “ In Tahrir Square, the mini-republic that is the Egyptian uprising’s ground zero, I ran into Seif Salmawy, the managing director of a publishing company. He was smiling; I asked why. “Suddenly we are human beings,” he said. “We think we can decide and that what we decide has worth and that we have some value as humans. Before there was the president, the police, the army and their money: We the people were just there to serve them.” http://www.nytimes.com/2011/02/05/opinion/05iht-edcohen05.html

However, the real cause of the revolutionary tide that will probably soon sweep the Arab world is Palestine. Let an Israeli, like Israeli writer and founder of the Gush Shalom peace movement, Uri Avnery, tell you that what is happening now in Egypt will forever change the Middle East ~ “ The turmoil in Egypt was caused by economic factors: the rising cost of living, the poverty, the unemployment, the hopelessness of the educated young. But let there be no mistake: the underlying causes are far more profound. They can be summed up in one word: Palestine…In Arab culture, nothing is more important than honor. People can suffer deprivation, but they will not stand humiliation…. Yet what every young Arab from Morocco to Oman saw daily was his leaders humiliating themselves, forsaking their Palestinian brothers in order to gain favor and money from America, collaborating with the Israeli occupation, cringing before the new colonizers. This was deeply humiliating for young people brought up on the achievements of Arab culture in times gone by and the glories of the early Caliphs… Nowhere was this loss of honor more obvious than in Egypt, which openly collaborated with the Israeli leadership in imposing the shameful blockade on the Gaza Strip, condemning 1.5 million Arabs to malnutrition and worse. It was never just an Israeli blockade, but an Israeli-Egyptian one, lubricated by 1.5 billion US dollars every year… A dictator may be tolerated when he reflects national dignity. But a dictator who expresses national shame is a tree without roots ­ any strong wind can blow him over. “

Mubarak is a shamed dictator without roots and the strong wind of an empowered and outraged people is blowing him over as Avnery eloquently concludes ~ “ When Egypt moves, the Arab world follows. Whatever transpires in the immediate future in Egypt ­ democracy or an army dictatorship - It is only a matter of (a short) time before the dictators fall all over the Arab world, and the masses will shape a new reality, without the generals…Everything the Israeli leadership has done in the last 44 years of occupation or 63 years of its existence is becoming obsolete. We are facing a new reality. We can ignore it ­ insisting that we are "a villa in the jungle", as Ehud Barak famously put it ­ or find our proper place in the new reality. Peace with the Palestinians is no longer a luxury. It is an absolute necessity. Peace now, peace quickly. Peace with the Palestinians, and then peace with the democratic masses all over the Arab world, peace with the reasonable Islamic forces (like Hamas and the Muslim Brothers, who are quite different from al Qaeda), peace with the leaders who are about to emerge in Egypt and everywhere.” http://www.rense.com/general92/vila.htm

The perfect storm of rising people power versus the Old World Order is now developing in Egypt but its true origins are in the ongoing humiliation of Palestine which touches a deep chord of humiliation throughout the Muslim world.

As such, Israel and the United States are on notice that the leading edge of this powerful storm will soon be crashing on their shores.