GIFFORDS ASSASSINATION ATTEMPT WAS AN ACT OF DOMESTIC TERROR 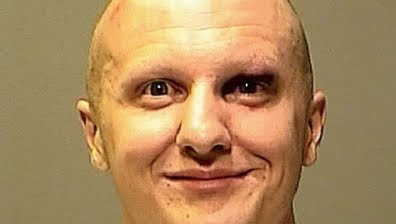 Gabrielle Gifford’s assassination attempt was an act of domestic terror. Giffords is the first Jewish woman elected to Congress from Arizona which raises the possibility of a hate crime but the increased violence of an ongoing policy of border militarization is the far more likely reason for this domestic political act of terror: Allen L Roland

Why isn’t Jared Loughner’s attempted assassination of Gabrielle Giffords being treated as an act of domestic terror instead of an irrational act of a deranged left or right wing crackpot. There’s more than enough evidence that this act was not only premeditated but encouraged. Loughner’s police mug shot shows the demeanor of someone who is at peace with his horrific actions ~ mission accomplished !

International Action Center of Tucson reported yesterday ~ “The infamous Sheriff Joe Arpaio, anti-immigrant law SB1070, the outlawing of Ethnic Studies programs in public schools, the escalating militarization of the border ~ this is what laid the basis for the events of Jan. 8. “Hate radio” talk-show hosts, like Tucson’s Jon Justice, along with nationally known bigots like Rush Limbaugh, Michael Savage and Glenn Beck, in their on-air rants continually use language encouraging violent acts… The assassination attempt is also directly related to the policy of border militarization. The increasing number of heavily-armed Border Patrol agents roaming the desert areas adjacent to the border wall has resulted in two fatal shootings within the last two weeks alone. Each of these events involved a large group of Border Patrol agents and a shooting spree. The first incident left a Border Patrol agent dead, while the most recent incident resulted in the death of a 17-year-old Mexican youth who was shot while trying to scale the border wall. Homeland Security will not provide any further details on either shooting… The militarization of the border and the actions of the racist Minutemen are just two examples of the climate that led to the Jan. 8 massacre. This was not the action of a "mentally unstable" youth "acting alone." It was the action of someone who has been given the signal that these kinds of violent and deadly attacks are needed. It was the action of someone who was encouraged to act as he did.”

Here’s an excellent example as reported in IAC ~ “Giffords retained her seat last November by a narrow margin in a campaign against Tea Party candidate Jesse Kelly. Fundraisers were held by Kelly where he urged supporters to help remove Giffords from office by joining him to shoot a fully-loaded M-16 rifle. He was pictured on his website in military gear holding his automatic weapon and promoting the event.” http://www.iacenter.org/struggle/giffords010911/

In addition a town-hall meeting on health care that Giffords hosted in the spring of 2010 was disrupted by Tea Party thugs, one of whom dropped a weapon. The night after the health-care vote in Congress, Gifford’s office was vandalized by kicking or shooting out a glass door and window.

The mainstream media has also virtually ignored the fact that Congresswoman Gabrielle Giffords is Jewish. Why the mainstream blackout of this fact unless it doesn’t want to acknowledge the unhealthy Congressional allegiance to the AIPAC lobby ( American Israeli Public Affairs Committee ) and the millions of Americans who resent this patronage as well as the methods that Israel uses to implement its world wide self serving agenda.

In former CIA asset Susan Lindhauer’s recently published book EXTREME PREJUDICE she points out the likelihood that Israel’s Mossad (Israeli Intelligence Agency) was involved in the preparation if not the implementation of the 9/11 attack. See Kevin Barretts January 8th Interview with Lindhauer where Barrett asks the question about Mossad involvement with 9/11;

“ So the question then, is...is it just sheer total incompetence and stupidity and grandstanding and egotism--I'm sure all of that contributes to it, but---uh...well, frankly, Susan, my take on all of this is that 9/11 was a Mossad operation, that it was of course done through Cheney's office. There were no hijackings. The guys that they blamed for it were not terrorists at all. They weren't even on the planes. There is not a shred of evidence that any of these guys were on those planes, nor is there a shred of actual evidence that there were any hijackings. Instead, we had a military operation that was essentially a Zionist coup d'état by the Likkud faction that wanted to destroy Iraq so it would never be a threat to Israel. A prosperous Iraq, allied to the US, would actually be terrible for Israel. That's why they wouldn't take the deals that you were brokering. Care to comment?

“ I think that you are--I do believe in the hijackings, but I believe in everything else that you have just said. One of the things that came out right after 9/11: I've often been asked by people what my CIA handler Richard Fuisz's source was for the 9/11 attack. And he told me briefly, he let it slip….. Right after the attack-the first building has collapsed, the second one is still standing ~ and we're both talking in the living room, we're both shouting ~ I'm in my living room, he's in his living room, and we're shouting at the televisions--and he blurts out to me: "Susan, how many times do you think a camera is cued up waiting for a car accident to occur?" He said, "What do you think are the odds that those two people were just standing on the sidewalk with a video camera waiting patiently for the plane to hit the building?" And he said, "Those are Mossad agents. They knew that the World Trade Center was about to get hit, and they were waiting there for it to happen so they could record it and put it out in the media." Now this is before it has even come out in the media. He identifies them as Mossad agents, and I believe--I'm convinced--that that was the source of our knowledge of al-Qaeda… But what you guys don't know, which I will throw out to you, which comes out in my book, is that from April and May of 2001 onwards, Richard Fuisz instructed me to threaten the Iraqis with war. Now everybody assumes that the war stuff came after 9/11. But it didn't. They had decided months before 9/11 ever happened that as soon as this attack occurred, this would be the motivation for the war. So they absolutely knew that this attack was coming. They knew that it was going to be in late August or September. And that opens up a whole new dynamic proving what you have just said: That it was a Mossad conspiracy, that there was complicity...maybe that's a better word, complicity...I'm going to go a little softer on the language than you. Mossad complicity.” Read the full transcrpt ~ http://truthjihad.blogspot.com/2011/01/cia-asset-susan-lindauer-blows-whistle.html

So there you have it. As I mentioned on my Press TV interview interview on Sunday ~ there is a great deal of rightful anger in America for many reasons including President Obama’s willful refusal to fight for a Single Pay health care program as well as meaningful Wall Street reforms and allowing an extremely unpopular Afghanistan occupation to continue with no end in sight. But America is also in a deep economic depression with a huge and growing void between the ultra rich and growing poor or haves and have nots.. Much of that Tea Party rage was exercised in the 2010 mid-term election where Sarah Palin put 20 Democratic members of Congress in her crosshairs, and Sarah Palin also bragged that 18 are now gone, leaving Rep. Giffords and Rep. Nick Rahall of West Virginia.

But there’s a lot for Americans to be legitimately angry at! Chris Hedges says it well ~ "Our manufacturing base has been dismantled. Speculators and swindlers have looted the U.S. Treasury and stolen billions from small shareholders who had set aside money for retirement or college. Civil liberties, including habeas corpus and protection from warrantless wiretapping, have been taken away. Basic services, including public education and health care, have been handed over to the corporations to exploit for profit. The few who raise voices of dissent, who refuse to engage in the corporate happy talk, are derided by the corporate establishment as freaks."

However, many Americans, including myself, also resent the fact that a large percentage of congressman are beholden to AIPAC despite the fact that they are paid handsomely ($175,000) and have lifetime pensions after they leave Congress.

All of this is common knowledge but when you add the poisonous tincture of anti-Semitism ~ you have all the ingredients of a hate crime along with domestic terror.

As such, Gifford’s assassination attempt is a not so isolated symptom of the growing disenfranchisement of Americans with their government and is most likely a hate crime as well as encouraged domestic terror. However, be forewarned ~ beneath the growing anger in America is a pervading sense of despair. When despair becomes unbearable ~ people will speak out and if no one listens ~ they will act out aggressively and eventually violently until someone listens.

Arizona currently has some of the most lenient gun laws in the country, according to University of Arizona law professor and gun law expert Gabriel Chin, interviewed on NPR. Chin said Arizona is "a state where the idea is that everyone who is an adult and a citizen or a lawful permanent resident is entitled to carry guns and own firearms." The state has no restrictions on assault weapons and a state permit is not required to purchase a gun. It's todays Tombstone of the old wild west.

I tend to Agree with David Degraw ( Amped) who wrote ~ Jared Loughner is a canary in the coal mine and a consequence of a collapsing society coming apart at the seams.