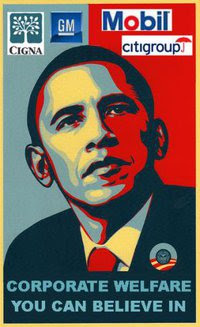 The long engagement is over and the marriage has finally been consummated between President Obama and the financial elite ~ with the appointment of William Daly as chief of staff and former Goldman executive Gene Sterling as his economic council chief. The stage is set for corporate welfare you can believe in and Main Street be damned ~ unless Obama is replaced in 2012: Allen L Roland

No more empty promises to his former Progressive and Independent base are necessary ~ President Obama is in full re-election mode, the Chicago mafia is assembled and his corporate base has been not only been bailed out but are more than willing to continue their corporate welfare dance with the Obama administration.

Meanwhile Obama is still cheer leading a failed top down recovery where the economy added 103,000 jobs (mostly in government subsidized health care and social services, and temporary business services) in December and Unemployment fell to 9.5 percent ~ largely because 260,000 adults dropped out of the labor force and are no longer counted as unemployed by the government.

As Dave Lindorff correctly wrote ~ " On every key issue of public concern--protecting Social Security, reforming and universalizing health care, re-regulating the banking industry, ending America's endless wars, cutting the military budget, and taking serious steps to combat global climate change, the government in this supposed democracy has gone against the wishes of the majority of the public."

Obama’s Organization for America ~ the grassroots organization set up to support President Obama’s so-called agenda of Change ~ will now be utilized to support Obama’s re-election bid in 2012 as well as keep an eye out for prominent dissenters.

But not everyone is still drinking the Obama Kool-aid and change is in the air on Main Street along with the truth. First let’s look at the political significance of these new Obama appointments ~ which William Grieder ( The Nation ) signals as The End Of New Deal Liberalism ~ “We have reached a pivotal moment in government and politics, and it feels like the last, groaning spasms of New Deal liberalism. When the party of activist government, faced with an epic crisis, will not use government's extensive powers to reverse the economic disorders and heal deepening social deterioration, then it must be the end of the line for the governing ideology inherited from Roosevelt, Truman and Johnson. Political events of the past two years have delivered a more profound and devastating message: American democracy has been conclusively conquered by American capitalism.”

Grieder sums up the disappointment of millions of Progressives and Liberals Liberals who yearned for the true change that Obama promised during his campaign ~ “ the administration of Barack Obama has been a crushing disappointment for those of us who hoped he would be different. It turns out Obama is a more conventional and limited politician than advertised, more right-of-center than his soaring rhetoric suggested. Most Congressional Democrats, likewise, proved weak and incoherent, unreliable defenders of their supposed values or most loyal constituencies. They call it pragmatism. I call it surrender… On healthcare, Obama cut deals with insurance and drug companies and played cute by allowing the public option, which would have provided real competition to healthcare monopolists, to be killed. On financial reform, Obama's Treasury lieutenants and a majority of the Congressional Democrats killed off the most important measures, which would have cut Wall Street megabanks down to tolerable size.”

Let’s take a hard look at these two Obama appointments and see how they consummated the marriage between Obama and the financial elite of Wall Street ~ at the expense of Main Street. David Degrew, Amped status news, does the honors ~ here’s some excerpts ~ “ If, on the other hand, you live in the real world, Obama’s latest cabinet appointments are yet another blatant sign that he is absolutely committed to destroying what is left of the middle class. Obama is doubling down on the side of the financial terrorists. Enter Bill Daley and Gene Sperling - a JP Morgan, Goldman Sachs one-two punch to send battered and bruised Americans to the canvas for a final ten-count.”

“ The announcement of Bill Daley, JP Morgan Chase’s czar of “government affairs” (lobbying), as Obama’s new Chief of Staff may sound bad on the surface, but if you dig into Daley’s background, it gets, as George W would say, “downright evil.” Other than spending the past seven years serving Jamie Dimon at JP Morgan, Bill Daley was also a Chamber of Commerce chair. While at the Chamber, Daley “played a major role in opposing the regulation of derivatives” and signed the now infamous Chamber of Commerce manifesto to destroy middle class America….. And we’re just getting warmed up… Daley was Clinton’s NAFTA czar (job exporting specialist) and he even has deep ties to the organization responsible for creating the explosion in CEO pay, all-time record-breaking inequality of wealth and shipping millions more jobs overseas, The Business Roundtable. They just released the following statement:

“Business Roundtable has a strong relationship with Mr. Daley and has worked with him in the past on many issues important to both business and the broader economy, such as the successful ratification of NAFTA. Mr. Daley can continue to be an important partner in our fight…. We look forward to continuing our work with Mr. Daley in his new position.”

Let’s also mention that he played a pivotal role in creating the housing crisis, was on the board of Fannie Mae, opposed financial reform, supported health insurance companies, fought for Pharma interests, lobbied for telecommunications companies and adamantly opposed the Consumer Financial Protection Bureau. He even railed against post-Enron accounting and auditing laws… P.O.P… that was the sound of the vein in my head bursting “.

“ But wait… it gets even better! As a board member of the think tank “Third Way,” Daley took a strong interest in cutting “entitlements” like Social Security and Medicare. He is a proud member of the Council on Foreign Relations and serves on the Boards of Directors of Merck & Co., one of the world’s largest pharmaceutical companies, and he is on the board of . . . wait for it . . . Boeing. Yes, the Pentagon-Wall Street-Pharma nexus is complete. You may now run the White House…. Seriously though, this appointment shows you how arrogant this criminal racket is in their power. Through Daley, JP Morgan and friends will now control Obama’s information flow and schedule. “

Degrew does not mince his words about Sperlings’ appointment as economic council chief replacing the infamous Larry Summers ~ “ Now, for the icing on the cake, Obama’s pick to replace Larry Summers as his top economic advisor is Tim Geithner’s right-hand confidant, former Goldman executive and Rubin disciple Gene Sperling. Sperling was also a Clinton-Rubin-Summers compadre who held this same position under Clinton, playing a direct role in implementing the very policies that fueled our current crisis. As Wikipedia succinctly states:

“As director of the NEC. Sperling was a principal negotiator with then-Treasury Secretary Lawrence Summers of the Financial Modernization Act of 1999, also known as the Gramm-Leach-Bliley Act. Gramm-Leach-Bliley repealed large portions of the depression-era Glass-Stegall Act allowing banks, securities firms and insurance companies to merge.”

Degrew concludes ~ “ As for Sterling’s most recent achievement, he played a lead role in extending tax cuts to the richest 1%. What a resume! Let’s put this guy in charge. You can’t even make this crap up. Could Obama have found any more corrupt and incompetent Wall Street thugs than this?” http://ampedstatus.com/obama-renews-commitment-to-complete-destruction-of-the-middle-class-meet-the-new-economic-death-squad

So there you have it! The marriage has finally been consummated with Wall Street and the financial elite. The so called “ Comeback Kid “ will ride the horse of corporate welfare into the next election asking Americans ~ Why change horses, I’m just as friendly with Wall Street and War as the Republican candidate.

That is, unless Main Street rises up and takes to the streets demanding the US out of Afghanistan, Pakistan, Iraq, Yemen and the Horn of Africa as well as an end to the Patriot Act and continued Wall Street abuses of power. This year a true political patriot will hopefully respond to this call and Obama will be replaced in 2012 whereas American democracy will re-conquer American capitalism ~ but that won’t happen without meaningful banking reform and a full scale revolt by Main Street.

"And I sincerely believe, with you, that banking establishments are more dangerous than standing armies; and that the principle of spending money to be paid by posterity, under the name of funding, is but swindling futurity on a large scale." ~ Thomas Jefferson