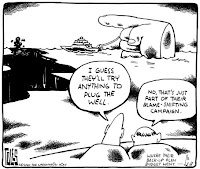 BP blames Transocean who blames Halliburton who blames a failed Blow Out Preventer with a faulty battery and, as such, Transocean. Obama blames Bush, Bush defers to Cheney who says " Go F##k yourself ". Only Jon Stewart seems capable of making sense of this great Gulf blame game fiasco: Allen L Roland

President Obama calls BP, Transocean and Halliburton's testimony a "Ridiculous Spectacle" according to Margaret Talev, McClatchy Newspapers: "President Barack Obama took aim Friday at BP and other companies involved in the Gulf of Mexico oil spill, calling their congressional testimony this week 'a ridiculous spectacle' and promising Americans his administration will be more critical of and less 'cozy' with the industry than predecessors." http://www.truthout.org/obama-calls-bp-transocean-testimony-ridiculous-spectacle59533

Of course, Obama also indirectly blamed the Bush administration and we can only surmise that Bush claimed ignorance and deferred to Cheney ~ ensconced in his dark bunker writing his self-serving memoirs ~ who blamed Al-Qaeda and muttered "Go F##k yourself ".

So that leaves only one person capable of putting this blame game fiasco in its proper perspective ~ Jon Stewart, who in eight hilarious minutes determines that There Will Be Blame. Click on ~
http://www.salon.com/news/politics/war_room/2010/05/14/daily_show_oil_spill/index.html?source=newsletter

Oil trails in Gulf of Mexico are now up to 10 miles long as BP continues its fight to stem flow from broken rig ~ Energy giant BP's latest desperate attempt to siphon gushing oil from a broken pipe in the Gulf of Mexico has failed as the toxic slick grows to 10 miles long. As BP struggled to contain the environmental disaster, scientists have found enormous oil plumes lurking beneath the surface of the water, including one as large as 10 miles long, three miles wide and 300ft thick. The discovery suggests that the leak could be 'substantially worse' than estimates given previously by BP and the government.

We obviously have a real need for an Independent Investigation to not only determine blame and responsibility but to immediately freeze the evidence.