Power And Privilege Versus Truth And Justice

POWER AND PRIVILEGE VERSUS TRUTH AND JUSTICE 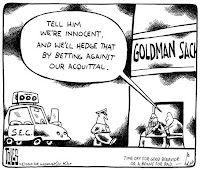 The dilemma of today's world is that the pursuit of power and privilege is usually at the expense of truth and justice and therein lies the achilles heal of the power elite and the myths they perpetuate: Allen L Roland

A new Rasmussen Reports national telephone survey shows that 54% of Americans lack confidence in the U.S. banking system ~ and rightfully so ! Unfortunately, we have an out of control credit-based financial system whereas power and privilege have prevailed and most certainly at the expense of truth and justice. As to the current SEC indictment, it will most likely result in a whitewash of Goldman and its executives or, at the most, a financial slap on the wrist ~ and, interestingly enough, Goldman hired former Obama White house legal counsel, Gregory Craig, to represent or more likely lobby on behalf of Goldman. Do remember, that Goldman was one of the two top contributors towards Obama's presidential campaign.

Nouriel Roubini correctly notes the true financial crisis in a recent essay:
" This is a crisis of solvency, not just liquidity, but true deleveraging has not begun yet because the losses of financial institutions have been socialised and put on government balance sheets. This limits the ability of banks to lend, households to spend and companies to invest...
The releveraging of the public sector through its build-up of large fiscal deficits risks crowding out a recovery in private sector spending."

Thus, we have the current failure of the Obama administration attempts to re-inflate the same credit bubble that burst two years ago through the Fed's artificially low mismatched interest rates and bank bailouts ~ which were meant to spill down to increased consumer credit and debt.

But the real problem is Wall Street's addiction to a credit based economy at the expense of the stark reality of a deepening depression and debt ridden Main Street. As StatsGuy points out last Monday on The Baseline Scenario ~ " To the uneducated masses, replacing savings with credit may sound a bit frightening, but economists can demonstrate – mathematically – that this credit-based money system is far more efficient than injecting money through the crude process of “printing” and government spending. That’s because endogenous money creation is decentralized – anyone with an opportunity and willingness to take risks (and collateral) can (theoretically) get credit to fund an investment. This, presumably, is why Larry Summers is so infatuated with the credit system, and why Obama argues that credit – not money – is the lifeblood of a modern economy."

We are presently stuck with an over extended credit based system and most certainly a mountain of dangerous unfunded obligations. StatsGuy points out the obvious regarding the need for regulation under the current precarious circumstances and the myth of stability ~ " any talk of financial reform rings hollow unless it’s accompanied by serious proposals to fix the discount rate mismatch problem and deal with unfunded obligations ...
" But maybe – if we’re lucky – we’ll get a modern day Pecora who will haul Goldman's Lloyd Blankfein to the witness stand, and taunt him till he breaks. Imagine, for a moment, Mr. Blankfein losing his cool while ranting in Jack Nicholson’s voice . . .

“You want the truth? You can’t handle the truth. Son, we live in a country with an investment gap. And that gap needs to be filled by men with money. Who’s gonna do it? You? You, Middle Class Consumer? Goldman Sachs has a greater responsibility than you can possibly fathom. You weep for Lehman and you curse derivatives. You have that luxury. You have the luxury of not knowing what we know: that Lehman’s death, while tragic, probably saved the financial system. And that Goldman’s existence, while grotesque and incomprehensible to you, saves pension funds. You don’t want the truth. Because deep down, in places you don’t talk about at parties, you want us to fill that investment gap. You need us to fill that gap."

“We use words like credit default swaps, collateralized debt obligation, and securitization… We use these words as the backbone of a life spent investing in something. You use ‘em as a punchline. We have neither the time nor the inclination to explain ourselves to a commoner who rises and sleeps under the blanket of the very credit we provide, and then questions the manner in which we provide it! We’d rather you just said thank you and paid your taxes on time. Otherwise, we suggest you get an account and start trading. Either way, we don’t give a damn what you think you’re entitled to!” http://baselinescenario.com/2010/04/19/discount-rate-mismatch/?


So there it is ~ you heard it ~ the voice of the power elite wielding its power and privilege and advertising it as the backbone of our morally decayed financial industry. Paul Krugman correctly states that much of our financial industry is a racket ~ " a game in which a handful of people are lavishly paid to mislead an exploit consumers and investors. And if we don't lower the boom on these practices ~ the racket will just go on."

And when it comes to privilege, according to Eric Lichtblau of the New York Times, “more than 125 former Congressional aides and lawmakers are now working for financial firms as part of a multibillion-dollar effort to shape, and often scale back, federal regulatory power.”


It's been three years since the over-inflated housing market began its crash and it's been a year and half since the Wall Street meltdown. We can no longer afford this ongoing pursuit of power and privilege at the expense of truth and justice !

Rep. Marcy Kaptur (D-OH) and others in Congress are boldly urging the Justice Department to launch a criminal investigation of Goldman and others who may have broken the law as they devastated our economy.
Now is the moment to make clear: Nobody on Wall Street is "too big for jail."

Can you sign this petition supporting members of Congress who are calling for a CRIMINAL investigation of Wall Street? Click here.