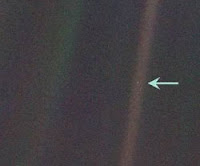 That pale blue dot is a picture of Earth taken by Voyager 1, from 4 billion miles away, as it was leaving our solar system in 1990 ~ courtesy of Space.com
It was William Blake who died singing songs to his wife and who wrote ' We are put on Earth a little space to bear the beams of love ' and who knew it was love that joined us to the Universe and that love was also deepest within each one of us : Allen L Roland

Obviously, as Carl Sagan wrote ~ "The Earth is a very small stage in a vast cosmic arena." Here's a must see Five minute Video narrated by Carl Sagan. ( Click on )
http://www.wimp.com/betterworld/
We are, indeed, a small planet attached to a medium sized star that is one of 200 billion stars in our Galaxy ~ a Galaxy so large that it takes our sun star 200 million years to complete one cycle. And our Galaxy is one of millions of galaxies.

Can it really be this simple ? Yes, it is this simple but to truly grasp humanity in perspective you must fully open your heart ~ for only then will you feel you are part of something far greater than yourself. Through love, and only love, we glimpse a great truth ~ that the basic condition of being human is love. And that we are all not only blessed to be here on this planet EARTH, this pale blue dot, but we chose to be here !