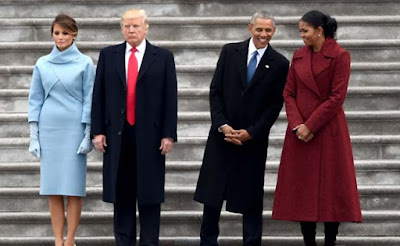 
Trumps and Obamas on Inauguration day 2017

This picture of the incoming and outgoing president on Inauguration day 2017 tells you everything you need to know about Trump and Obama. One saw himself as President of the people and the other sees himself unfortunately as a dictator and enforcer of his mandate. Both have many things in common but only Obama has maintained the childlike enthusiasm of a child: Allen L Roland, PhD

"There are differences between the two presidents, of course. Obama got to the White House despite the lingering racism in American life and politics. Trump stoked that racism and gleefully rode it into Washington." Andrew Rosenthal, New York Times

Andrew Rosenthal, New York Times,  spells out what Trump and Obama have in common in an Opinion piece on March 28th.

Obama was distrusted by American corporate leaders. Trump is one of them.

Obama came to Washington to govern. Trump came to preen.

Obama had a specific agenda with actual legislative proposals. Trump has tweets.

Obama showed a detailed understanding of policy issues. He could talk about them with authority and was thoroughly steeped in history.

Trump doesn’t seem to know the first thing about much of anything, past or present.


“Nobody knew health care could be so complicated,” he famously said as people who did know that were hard at work on Capitol Hill coming up with a proposal to replace Obamacare that failed spectacularly last week and left Trump looking like a fool (to everyone except himself).

But as new presidents, Obama and Trump share that debilitating belief in their own public relations.

Obama got over it eventually. Will Trump?"

I miss the realness and humanness of the Obama's and I'm sure many other Americans feel the same thing particularly as we witness the ongoing fabrications emerging from the Trump / Bannon Administration..

We all had many expectations about Barack Obama and many of those remain unfulfilled but we must all agree that there was nothing fake about the humanness of the Obama's ~ this eight minute video illustrates many of the lessons they taught us by just being and sharing  their true selves versus our current Reality TV Trump administration.

There is nothing as precious as the human touch or the genuine smile of a child as well as leaders who recognize this ~ thank you Barack and Michelle.


Heart centered spiritual consultant and advisor Allen L Roland can be contacted at allen@allenroland.com Allen is also a lecturer and writer who shares a weekly political and social commentary on his web log and website allenroland.com. He is also featured columnist on Veterans Today and is a featured guest on many radio and Television programs.
Posted by Allen L Roland, Ph.D at 10:50 AM