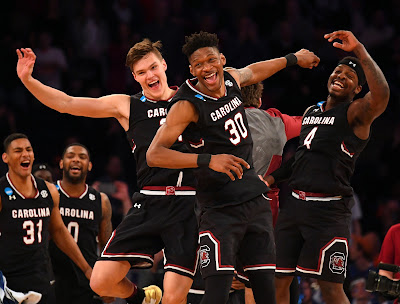 "South Carolina’s players said Thursday that it was easy to pinpoint from where their defensive prowess stems. It is from Coach Martin, who calls the defense his “baby” and designed it in his image, an image he projects as he prowls the sidelines with a glare that could melt ice" ~ Zach Shonbrun/ New York Times

It's March and that means the NCAA basketball tournament and if you're not in a bracket pool, you're totally out of touch with the beauty and anguish of the annual big dance of college basketball.

In the Mercer Pool ~ I picked Duke as the winner figuring they were the hot team going into the tournament and of course they had the legendary Coach K as their coach.

Of course they trampled Troy in the 1st round and would face the South Carolina #7 seeded Gamecocks in the second round ~ which should bolt them into the sweet 16.

As I eagerly tuned into that game, I quickly became aware the Gamecocks were a force that was not to be underestimated ~ as their frantic defense broke down the disciplined Duke offense and left Coach K muttering to himself in disbelief.

At that moment , I recognized that the Cinderella team of this tournament were the gamecocks with their defensive genius coach, Frank Martin


The gamecocks followed their upset of Duke with a complete thrashing of third-seeded Baylor, 70-50, and now zoomed into the elite 8 to face Florida ~ propelled by a victory that McGuire, who died in 1994, would unquestionably have adored.


“It all starts with our mindset,” Martin said. “We have got guys that are completely bought into what we do.”


As Zack Shonbrun reported the New York times ~ "South Carolina’s defense only seemed to intensify in the second half, as did its effect on the Bears. Baylor’s players dropped easy passes, dribbled off their own feet, and stepped mindlessly out of the bounds.

“I felt like we were in their heads the whole game,” said Sindarius Thornwell, the Gamecocks’ senior forward.


South Carolina’s players said Thursday that it was easy to pinpoint from where their defensive prowess stems. It is from Martin, who calls the defense his “baby” and designed it in his image, an image he projects as he prowls the sidelines with a glare that could melt ice." 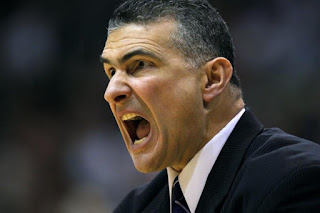 
When asked how the Gamecocks had managed to beat two of its last three opponents (Duke and Baylor) by 20 points each, sophomore guard P.J. Dozier had the answer immediately.


“Defense,” he said. “That’s what we hang our hats on. That’s what this coaching staff instilled in us.”

And I predict that The gamecock's defense will carry them to the final four as well as the NCAA championship.


Heart centered spiritual consultant and advisor Allen L Roland can be contacted at allen@allenroland.com Allen is also a lecturer and writer who shares a weekly political and social commentary on his web log and website allenroland.com. He is also featured columnist on Veterans Today and is a featured guest on many radio and Television programs.
Posted by Allen L Roland, Ph.D at 9:04 PM