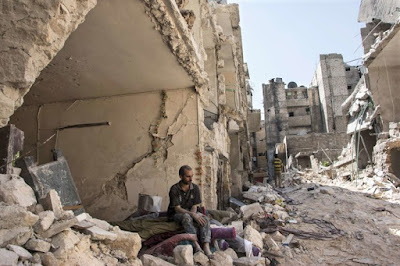 
There are other participants like Turkey, Iran, Saudi Arabia and Qatar but you have now met the principals whose principle agenda is Regime Change ~ see NY Times article http://www.nytimes.com/2015/10/01/world/middleeast/the-syria-conflicts-overlapping-agendas-and-competing-visions.html

Robert Parry, Consortium News, asks the most obvious question ~ "Will President Barack Obama and other leaders finally level with the American people and the world about what the underlying reasons for this madness are? Will Obama explain how U.S. “allies” in the Middle East, such as Saudi Arabia, Turkey and Qatar, have been fuelling this Sunni extremism for years? Will he dare recognize that Israeli repression of the Palestinians is a major contributing factor, too?" See Parry article ~ http://readersupportednews.org/opinion2/277-75/33514-can-obama-level-with-the-people


Of course President Obama will do no such thing and will instead accommodate the neocons and liberal hawks, including Hillary Clinton, who remain influential within his own administration.


In Essence,The War on Terror and Syria is still all about Empire building and Regime Change and only the honest and rational thoughts of people such as Chalmers Johnson ( who has seen it all ) can offer the tough truth needed to deal with the reality of this ISIS Blowback Death Trap.


“Terrorism The suicidal assassins of September 11, 2001, did not “attack America,” as political leaders and news media in the United States have tried to maintain; they attacked American foreign policy. Employing the strategy of the weak, they killed innocent bystanders, whose innocence is, of course, no different from that of the civilians killed by American bombs in Iraq, Serbia, Afghanistan, and elsewhere.”
~ Chalmers Johnson, Blowback, Second Edition: The Costs and Consequences of American Empire