WORLD WAR THREE Will BEGIN ON THE SOUTH CHINA SEA 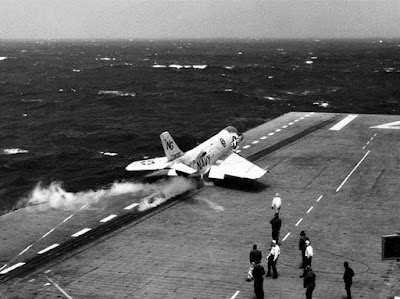 In 1960 I patrolled the South China Sea in my all weather Navy Interceptor F3H Demon and often crossed paths with Communist MIG 15 Interceptors but in a similar non-combat role but now 55 years later, the times have changed, the war drums are beating and the setting for a Bay of Tonkin false flag incident on the South China Sea could well begin World War Three as well as engulf the far east, including a reluctant Japan, in military if not nuclear conflict: Allen L Roland, Ph.D

"The question is: how bad do things have to get before you will do something about it? Where is your line in the sand? If you don't enforce the constitutional limitations on your government very soon, you are likely to find out what World War III will be like."  ~  Michael Badnarik

To fully find the truth regarding the current conflict between the United States in China on the South China Sea ~ one must of course follow the money and realize we are really talking about the survival of the New World Order with the uncomfortable reality that BRICS has become a formidable economic power whereas the world's biggest trading nation (China) and second largest economy will soon find it unnecessary to be anchored to a single currency, the US dollar.


Pepe Escobar in March (ICH) revealed that BRICS is where the real global financial threat to the West lies;


" The acronym that all these “forecasts” dare not reveal is BRICS (Brazil, Russia, India, China, and South Africa). BRICS is worse than the plague as far as the ‘Masters of the Universe’ that really control the current - rigged - world system are concerned … The BRICS New Development Bank (NDB) – a key alternative to the IMF enabling developing nations to get rid of the US dollar as a reserve currency – will be operative by the end of this year. The NDB will finance infrastructure and sustainable development projects not only in the BRICS nations but other developing nations. Forget about the Western-controlled World Bank, whose capital and lending capacity are never increased by the so-called Western “powers.” The NDB will be an open institution. BRICS nations will keep 55 percent of the voting power, and outside their domain no country will be allowed more than 7 percent of votes. But crucially, developing nations may also become partners and receive loans."

As Pepe points out a new global galaxy is developing in the global economic universe and at its center is China ~ " The US “pivoting to Asia” – launched at the Pentagon – is all dressed up with no place to go. Bullying Southeast Asia, South Asia and, for that matter, East Asia as a whole into becoming mere ‘Empire of Chaos’ vassals – and on top of it confronting China - was always a non-starter. Not to mention believing in the fairy tale of a remilitarized Japan able to “contain” China and Isolating the “communist dictatorship” won’t fly. Just watch, for instance, the imminent high-speed rail link between Kunming, in Yunnan province, and Singapore, traversing a key chunk of a Southeast Asia which for Washington would never qualify to be more than a bunch of client states. The emerging 21st century Asia is all about interconnection; and the inexorable sun in this galaxy is China."


The Global elite are not taking these interconnection developments lightly as Pepe correctly predicts  ~ "Of course the ‘Empire of Chaos’(The United States ), business-wise, won’t be thrown out of Asia. But its days as an Asian hegemon, or a geopolitical Mob offering “protection”, are over."


So there you have it, a deeply diminished United States is attempting to prop up its fading Empire by military threats and posturing on the South China sea and at the same time drag in a reluctant Japan to protect its flank.

As Peter Symonds reports in WSWS, the provocations are already accelerating;  "Just days after a CNN news crew joined a P8-A Poseidon surveillance aircraft over a Chinese-administered islet in the South China Sea, it is clear the flight was a calculated provocation aimed at ramping up pressure on China. American officials immediately exploited the reportage to underline Washington’s determination to challenge Chinese territorial claims in these key strategic waters, regardless of the consequences …. Just like the 2003 invasion of Iraq, the media is once again being “embedded” as the propaganda arm of the military as the US prepares for war with China. CNN made no pretense of independent reporting, painting China as the villain engaged in “a massive military build-up” on the islets ~ an early warning radar station on Fiery Cross Reef ~ and dramatically highlighting warnings from a Chinese radio operator appealing for the aircraft to “please go away… to avoid misunderstanding…  US imperialism’s overriding aim is not to secure “freedom of navigation” in the South China Sea. Rather the South China Sea has become the pretext for a show of force intended to bully Beijing into accepting US hegemony in Asia. For this, Washington is preparing for, and willing to risk, war."


But Symonds cuts to the chase on May 18th by asking the obvious Question ~ Is The US planning a "Gulf of Tonkin" incident in the South China Sea?

Excerpt: "The historic parallels are chilling. In 1964, President Lyndon B. Johnson needed a justification for decisions that had already been made to dramatically escalate US military involvement in a civil war in Vietnam and to begin bombing targets in North Vietnam. Pentagon planners had concluded that Washington’s widely reviled puppet regime in Saigon was incapable of defeating the North Vietnamese-backed National Liberation Front on its own….Preparations for massively expanding US involvement were drawn up well in advance. In the summer of 1964, the US worked with the South Vietnamese to stage a series of provocations ~ probes by US-supplied patrol boats to expose North Vietnamese radar systems …. On August 2, the USS Maddox was monitoring one of these raids in the Gulf of Tonkin, part of the South China Sea, eight miles offshore and well within North Vietnam’s 12-mile territorial waters, that provoked an exchange of fire with small North Vietnamese boats…. Two days later the USS Maddox, accompanied by the destroyer C. Turner Joy, reported coming under fire. There was, in fact, no attack. The entirely manufactured incident, surrounded by a barrage of media sensationalism and official lies, was exploited to paint North Vietnam as the aggressor… …The belligerent response of the United States was presented as justified, defensive actions to maintain “international peace and security in Southeast Asia.”

Then Symonds makes the South China Sea connection ~  "As part of the “pivot” to Asia, the Pentagon is already engaged in a massive military build-up and strengthening of alliances and strategic partnerships throughout Asia directed against China. One of the latest warships, the USS Fort Worth, has just completed a week-long “freedom of navigation” patrol in the South China Sea designed to test and challenge China’s presence…While the USS Fort Worth remained outside China’s claimed territorial waters, US Defense Secretary Ashton Carter has called on the Pentagon to draw up plans for US warships and warplanes to enter the 12-mile limit and directly challenge Chinese sovereignty. Undoubtedly behind the scenes, far more detailed war plans have been drawn up… But in confronting China, Washington faces widespread anti-war opposition at home and around the world, born of two decades of continuous wars including the invasions of Afghanistan and Iraq. No one should be surprised by a new “Gulf of Tonkin incident” suddenly emerging in order to try to stampede public opinion behind US aggressive military operations against China."   See WSWS report ~ http://www.informationclearinghouse.info/article41896.htm#.VWvyGzLHPEM.email

The stage has been set and now all the West needs is a militarized ally on its flank and that would mean Japan ~ and it appears that Prime Minister Shinzō Abe has already drank the Obama kool aid and is ready to accelerate Japan’s remilitarization as reported by Ben McGrath in WSWS; " The Japanese cabinet signed off on two new bills on Thursday that will accelerate Japan’s remilitarization. The legislation corresponds to joint-military guidelines agreed to by Prime Minister Shinzo Abe during his recent trip to the United States. The bills will be presented to the Japanese parliament, or Diet, shortly and a vote is expected by July… The bills have nothing to do with ensuring peace or protecting the public. The Abe government, encouraged by the US, is seeking to remove all restrictions on the operations of the Japanese military, in particular its ability to participate in Washington’s wars under the guise of “collective self-defense….However, central to so-called “collective self-defense” is Japan’s integration into the US military build-up throughout Asia against China as part of its “pivot to Asia.” Speaking last month (after his disastrous fractured English speech to the US Congress) Abe explained why, from Washington’s standpoint, the present situation was untenable ~ “If there were an attack against the US [Aegis] destroyer [near Japan], Japan would not be able to prevent that from happening under the current law,” he said. “In the future, the Japanese Aegis destroyer will be able to protect the US Aegis destroyer… Since coming to office, the Abe 'American puppet' government has boosted military spending, redrawn military guidelines to focus on China, established a US-style National Security Council and enacted an anti-democratic secrecy law. At the same time, Abe has been waging an ideological campaign to whitewash the crimes of Japanese militarism in the 1930s and 1940s to condition public opinion, particularly young people for new wars." See article ~  http://www.wsws.org/en/articles/2015/05/16/japa-m16.html

The lines have been drawn in the South China Sea and the players have been identified between an over extended American Empire and the new BRICS economic powerhouse that economically threatens the new World Order ~ and could well replace the dollar in the near future with the Chinese Yuan.


Beijing’s response to these recent US provocations, via the Global Times; “If the United States’ bottom line is that China has to halt its activities, then a U.S.-China war is inevitable in the South China Sea … The intensity of the conflict will be higher than what people usually think of as ‘friction’.”


In 1960, as a Navy fighter pilot, we feared the Chinese but now 55 years later they are an economic juggernaut and a seeming financial threat which has brought the United States to the edge of purposely starting a war.

Heart centered spiritual consultant and advisor Allen L Roland can be contacted at  allen@allenroland.com Allen is also a lecturer and writer who shares a weekly political and social commentary on his web log and website allenroland.com. He is also a featured columnist on Veterans Today and  guest hosts a monthly national radio show TRUTHTALK on www.conscioustalk.net