GEORGE CARLIN / THE PERFECT PROPHET FOR OUR DISINGENUOUS TIMES 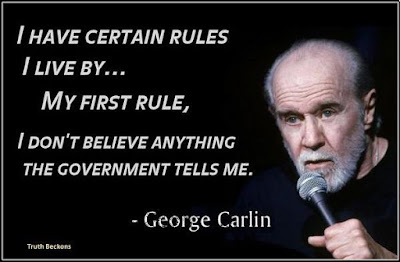 As I search for a morsel of truth in the actions of our disingenuous plutocracy ~ I find myself always falling back to the truths of the late George Carlin, our modern day Mark Twain, who not only saw the duplicity of our present actions but was more than willing to speak his truth with biting humor and sarcasm: Allen L Roland, Ph.D

“How is it possible to have a civil war?”
~ George Carlin

On the anniversary of his passing seven years ago, I pay homage to his courage and willingness to speak his truth to power ~ for George Carlin remains a hero to all those who seek the truth, including myself, as well as a constant inspiration to those who would speak their truth during these disingenuous times.

Here's George cutting through the layers of deception and revisionist history of the American government to concisely explain the real objectives of our rulers upon the population, despite what they say to the public. You really don't need to read very far into this subject to reach a similar conclusion.

1.  Never raise your hands to your kids. It leaves your groin unprotected.


5.  Do illiterate people get the full effect of alphabet soup?


6.  I've always wanted to be somebody, but I should have been more specific.


7.  Ever notice when you blow in a dog's face he gets mad at you, but when you take him in a car he sticks his head out the window?


9.  You have to stay in shape. My mother started walking five miles a day when she was 60. She's 97 now and we have no idea where she is.


10, I have six locks on my door, all in a row. When I go out, I lock every other one. I figure no matter how long somebody stands there picking the locks, they are always locking three of them.


11. One out of every three Americans is suffering from some form of mental illness. Think of two of your best friends. If they are OK, then it must be you.


12. They show you how detergents take out bloodstains. Think if you've got a T-shirt with bloodstains all over it, maybe your laundry isn't your biggest problem.


13. Ask people why they have deer heads on their walls and they tell you it's because they're such beautiful animals. I think my wife is beautiful, but I only have photographs of her on the wall.


14. A lady came up to me on the street, pointed at my suede jacket and said, "Don't you know a cow was murdered for that jacket?" I said "I didn't know there were any witnesses. Now I'll have to kill you too."


15. Future historians will be able to study at the Jimmy Carter Library, the Gerald Ford Library, the Ronald Reagan Library, and the Bill Clinton Adult Bookstore.

The magic of George Carlin was his ability to make me laugh at myself, the government and the blatant disingenuous nature of our times ~ it seemed almost Zen-like, and I believe it was, for Carlin indeed knew how to plant ideas in our minds, much like Twain, with his irreverent truth and humor.

“But when you're in front of an audience and you make them laugh at a new idea, you're guiding the whole being for the moment. No one is ever more him/herself than when they really laugh. Their defenses are down. It's very Zen-like, that moment. They are completely open, completely themselves when that message hits the brain and the laugh begins. That's when new ideas can be implanted. If a new idea slips in at that moment, it has a chance to grow.”
~ George Carlin, Last Words