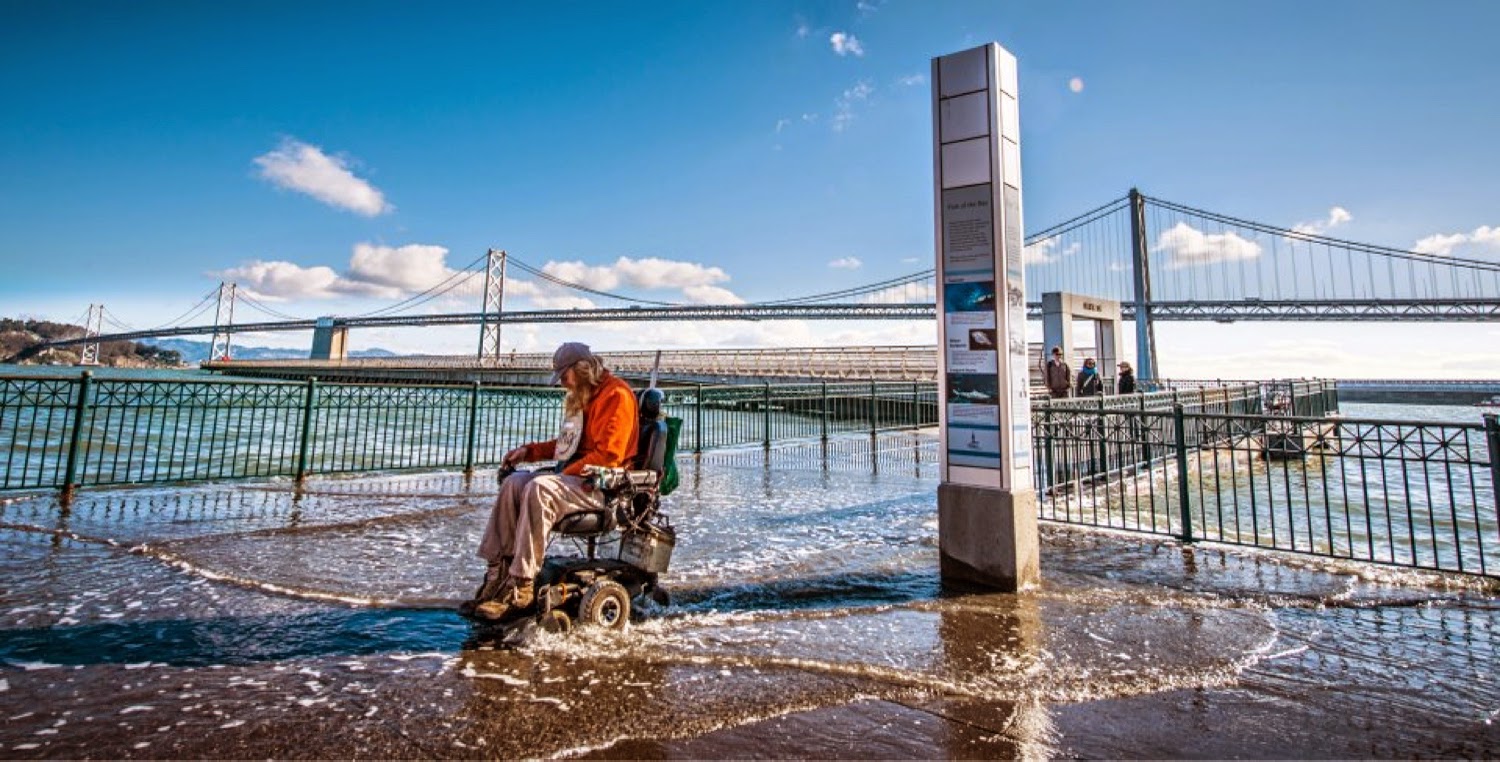 Click on photos to enlarge
King Tide on San Francisco Embarcadero on Tuesday, January 21, 2015 offers a glimpse into the not too distant future of Climate Change: Photo credit, Mike Flippoff, SF Chronicle

The Earth has a unique method of delivering its innate message of its demand for social cooperation and altruism and global warming and climate change just may be the vehicle for that long overdue message. If we humans do not voluntarily take action to preserve our planet and its occupants ~ we will be dramatically forced to respond and it won't be painless: Allen L Roland. Ph.D

“If we can't love our one and only home, what can we love? If we're unwilling to defend what we love, then what are we?”
~  Michael Carter, Kingfisher's Song: Memories Against Civilization 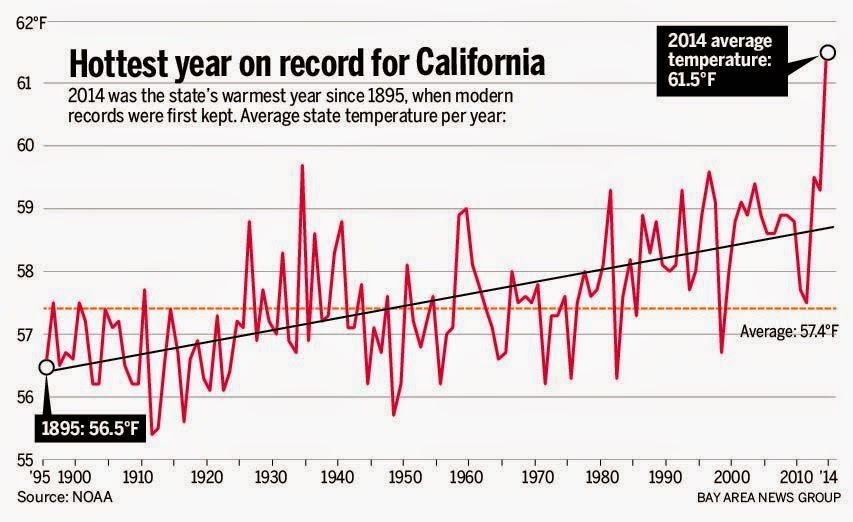 2014 was the hottest year on record for California and 2015 is starting out on the same track as global warming, like a never ending creeping fog, inevitably changes our coastlines and way of life and ushers in the hard cold reality of Climate Chang 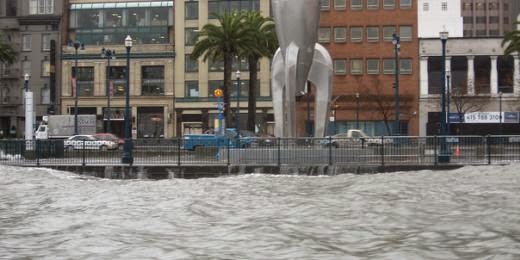 " This is what San Francisco will look like on an average day in 2050," said Marina Psaros, co-founder of the Kings Tides Project, an environmental group that studies the phenomenon. "Water levels are higher because the Earth is warmer ~ there's nothing theoretical about it, nobody with a real stake in the game, people like city planners and insurance underwriters ~ is denying global warming anymore."

The big climate news last week was NOAA and NASA announcing that 2014 was the hottest year on record, breaking the highs of 2005 and 2010 ~ but the bigger story got buried: Global warming has continued unabated in recent years. As climate expert Prof. John Abraham writes in the UK Guardian, “The oceans are warming so fast, they keep breaking scientists’ charts.”

But I maintain that we are already beyond the point of no return ~ because the release of previously trapped arctic methane stores into the atmosphere will magnify the gradual effects of feedback loops, climate disruption and the rapid rise of sea levels. 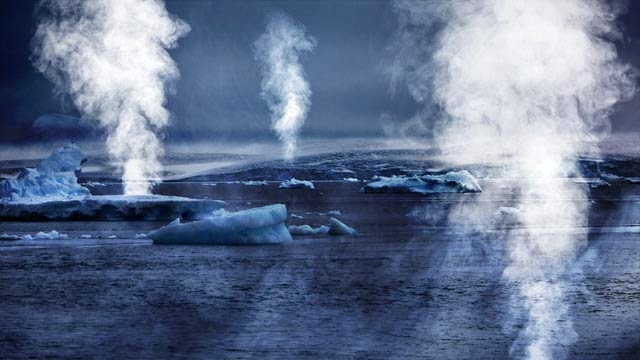 The looming specter of an abrupt methane release in the artic is not only real but likely and could lead to an immediate temperature rise of 5 to 6 degrees ~ possibly within a decade as explained by Dahr Jamail in Truthout;

Excerpt: " Vast amounts of methane lie frozen in the Arctic. It's not news that the Arctic sea ice is melting rapidly, and that it will likely be gone for short periods during the summers starting as early as next year. Losing that ice means releasing larger amounts of previously trapped methane into the atmosphere…..In the simplest terms, here's what an ice-free Arctic would mean when it comes to heating the planet: Minus the reflective ice cover on Arctic waters, solar radiation would be absorbed, not reflected, by the Arctic Ocean. That would heat those waters, and hence the planet, further. This effect has the potential to change global weather patterns, vary the flow of winds and even someday possibly alter the position of the jet stream. Polar jet streams are fast-flowing rivers of wind positioned high in the earth's atmosphere that push cold and warm air masses around, playing a critical role in determining the weather of our planet…In the atmosphere, methane is a greenhouse gas that, on a relatively short-term time scale, is far more destructive than carbon dioxide. When it comes to heating the planet, methane is 23 times more potent than carbon dioxide, per molecule, on a 100-year timescale, and 105 times more potent on a 20-year timescale - and the Arctic permafrost, onshore and off, is packed with the stuff.” See article ~ http://www.truth-out.org/news/item/28490-the-methane-monster-roars

What Dahr is saying is that a 50 gigaton release (Burp) of Methane from thawing Artic Permafrost beneath the East Siberian sea is highly possible at any time ~ "This means that methane releases from decaying frozen hydrates could result in emission rates that "could change in order of magnitude in a matter of minutes," and that there would be nothing "smooth, gradual or controlled about it"  ~ as it would affect the whole planet immediately.

A Methane time bomb ticking away in the artic and holding the whole world hostage unless we evolve collectively from ego consciousness to soul consciousness. 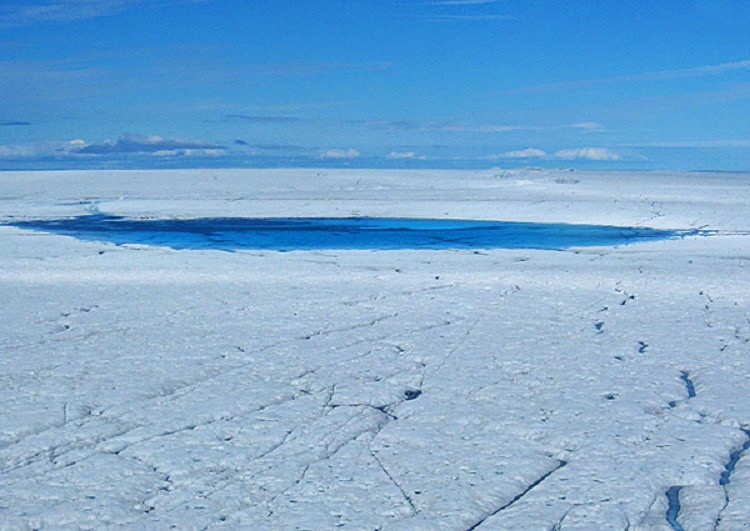 Here's more recent evidence of global warming and the effect on rising sea levels ~ Meltwater lakes in Greenland are fast draining off due to rising temperatures in the region, with some of them disappearing within weeks. One of the sub-glacial lakes that once held about 6.7 billion gallons of water disappeared within a single season ~ and the second one has filled and emptied twice in the last two years.

Scientists already know that sub-glacial lakes exist in Greenland, but they were not aware that they drain out to sea at almost 57,000 gallons per second ~ until now; and this appears to be the main cause of rising sea levels. See NY Times article ~ http://www.thetimesgazette.com/due-to-rising-temperatures-greenlands-lakes-are-disappearing-within-weeks/652/

There is something very right about this global warming message ~ Unite and cooperate or perish ~ are we ready for dramatic needed action?

The earth is growing impatient and demands an answer through climate change.

Heart centered spiritual consultant and advisor Allen L Roland can be contacted at  allen@allenroland.com . Allen is also a lecturer and writer who shares a weekly political and social commentary on his web log and website allenroland.com. He is also a featured columnist on Veterans Today and  guest hosts a monthly national radio show TRUTHTALK on www.conscioustalk.net