WHAT MARTIN LUTHER KING Jr WOULD DO TODAY 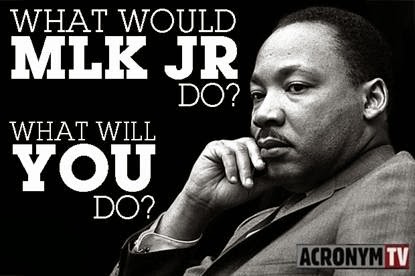 Martin Luther King was above all a truth teller, the ultimate whistle blower, and we can carry on his legacy by insisting on nothing but the truth and settling for nothing less than the truth. King was far more than a moderate reformer ~ King was a change agent who advanced strong policy changes that went against the grain of the nation’s corporate state, and insisted that  “only by structural change can current evils be eliminated, because the roots are in the system rather in man or faulty operations”: Allen L Roland

On Martin Luther King Day, I look for the real King, not the white washed image portrayed by the main stream press but instead the deeply concerned revolutionary who knew the real meaning of his Nobel Peace Prize ~ as Paul Street explains in Popular Resistance ; " Explaining why he had turned against the Vietnam War, King noted that “a burden of responsibility was placed upon me in 1964: I cannot forget that the Nobel Prize for Peace was also a commission ~ a commission to work harder that I had ever worked before for ‘the brotherhood of man.’ This is a calling which takes me beyond national allegiances …to the making of peace”  Read full article:
http://www.popularresistance.org/remembering-the-officially-deleted-dr-king/

King today would be fulfilling his Nobel Prize commission and be working for the brotherhood of man, not Wall Street and the Corporate State ~ which is why we celebrate him today and this is what we should expect from fellow Nobel Peace Prize Laureate Barack Obama ~ and see little visible evidence of.

Watch this 7 minute video on If Martin Luther King Were Alive Today and reflect on this great man and his message ~
http://www.youtube.com/watch?feature=player_embedded&v=J3h45EBjOok