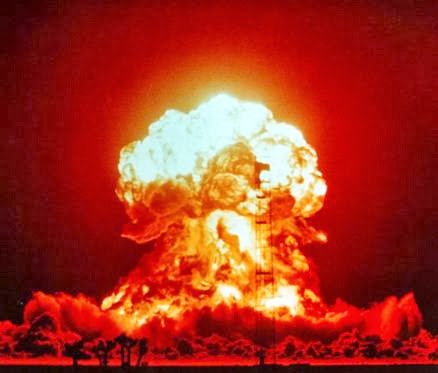 The Public Broadcasting Industry paid for and is now suppressing a documentary film "Nuclear Savage" that explored nuclear testing in the Marshall Islands 1946-1958 ~ that exposed Pacific Islanders to deadly overdoses of radiation just to send a message and get more data on killing and maiming people: Allen L Roland

The Republic of the Marshall Islands covers nearly a million square miles of picturesque islands, thriving coral atolls, and crystal clear blue waters …. undoubtedly one of the most interesting places in the world to live and visit and evidently to bomb.

It was a Pacific island paradise...  until the United States tested nuclear weapons and conducted secret human radiation experiments from 1948 to 1954.Experiments that would remain top-secret for decades....Until now...

The U.S. Army performed nuclear weapons testing on Bikini from 1948 to 1954 and established a missile testing range in Kwajalein. On March 1st, 1954, the US Government conducted the BRAVO nuclear test (Project 4.1) which was 1000 times larger than the nuclear explosion at Hiroshima.

Project 4.1 is the study of the response of human beings exposed to significant beta and gamma radiation due to fall out from high yield weapons (nuclear bombs). In other words, the Pacific Islanders were treated as savages and guinea pigs so the US Government could send a message as to its military might and the effect on those who dare to oppose it.

In 2005, director Adam Horowitz started work on "Nuclear Savage," his second documentary about the American military use and abuse of the Marshall Islands.

As William Boardman writes in Reader Supported News ~ Horowitz has a contract with Pacific Islanders in Communications (PIC), which describes itself as "a national non-profit media arts organization" whose mission "is to support, advance and develop programming that enhances public recognition of and appreciation for Pacific Islander history, culture, and society."  Among its efforts to carry out this mission, PIC supported the production of "Nuclear Savage" with $100,000 passed through to Horowitz from the Corporation for Public Broadcasting (CPB). Horowitz delivered a completed, 87-minute version of "Nuclear Savage" in October 2011 - the same month it was nominated for Best Environmental Film at the Amsterdam International Documentary Film Festival. That was also the same month various public broadcasting officials started putting up roadblocks to keep the movie off the air, a delaying tactic that continues into 2014. FAIR (Fairness & Accuracy in Reporting) reported the story in detail as "Nuclear Stalemate" in Extra!

PIC summarizes the film this way: "Some use the term 'savage' to refer to people from primitive cultures, but nuclear experimentation pushed savagery to new levels. In the 1950s, the U.S. conducted 67 atomic and hydrogen bomb tests in the Marshall Islands, vaporizing islands and exposing entire populations to fallout. The islanders on Rongelap received near fatal doses of radiation from one test, and were then moved onto a highly contaminated island to serve as human guinea pigs for 30 years. Filmmaker Adam Jonas Horowitz spent 25 years collecting material - including original footage, archival clips, and unpublished secret documents - to create this unforgettable and ironic portrait of American cynicism, arrogance, and racism. Winner of festival awards in Paris, Chicago and Mexico City."

Here is the 8 minute trailer video which features Adam Horowitz describing America's most horrific and barbaric act of racism ~
http://www.youtube.com/watch?v=wqdRIt1EnkY&feature=youtu.be