ELECTION 2012 / OBAMAVILLE AND STATUS QUO SURVIVE BUT WARREN AND GRAYSON ARE GAME CHANGERS. 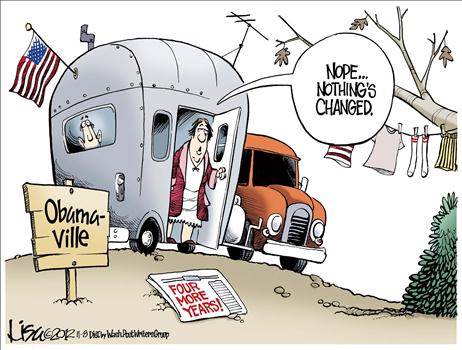 The morning after Obama's 2012 presidential victory we are faced with the cold reality that ObamaVille and the status quo still reign supreme ~ but the election of Senator-elect Elizabeth Warren and Rep Alan Grayson just might be the game changers regarding the obvious need for Wall Street reform: Allen L Roland 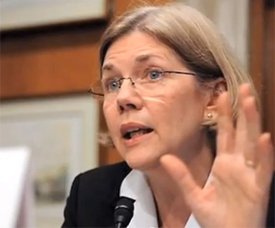 I did not vote for Barack Obama on November 6th ~ Instead I voted for real change, along with Chris Hedges and Noam Chomsky, and cast my vote for Jill Stein of the Green Party.
As Andy Borowitz correctly writes in ICH ~ One day after the costliest Presidential election in U.S. history, Americans awoke to the ugly realization that the nation had spent $2.5 billion with absolutely nothing to show for it….. “Four years ago, Barack Obama was elected President of the United States, and that is still the case,” says Professor Davis Logsdon of the University of Minnesota. “The only difference is that we as a nation are out $2.5 billion.” Mr. Logsdon claims that America’s system of egregious political spending “has made us the laughingstock of the world,” arguing, “Even Greece would know better than to blow through money like that.”   See article : http://www.informationclearinghouse.info/article32965.htm

But a ray of hope and light as well as the potential for a change in the status quo has emerged in 2012 with the election of Elizabeth Warren ~ a formidable and authentic agent of change. She is also Wall Street's biggest headache and rightfully so ~ the Dow Jones was down over 300 points the morning after her election. Here are some of her most memorable quotes ~
“Wall Street C.E.O.’s ~ the same ones who wrecked our economy and destroyed millions of jobs ~ still strut around Congress, no shame, demanding favors, and acting like we should thank them,” she said in her speech at the Democratic National Convention in September.
“The people on Wall Street broke this country, and they did it one lousy mortgage at a time. It happened more than three years ago, and there has been no real accountability, and there has been no real effort to fix it,” she said in a debate last year.

Ms. Warren, the architect of the Consumer Financial Protection Bureau, will have the opportunity, as a Senator,  to weigh in on a number of the issues that are making Wall Street rightfully nervous ~ as regulators work to implement the Dodd-Frank financial overhaul law.

As William Alden writes in the New York Times ~ " Ms. Warren has supported a simpler, stronger Volcker Rule, the regulation that bars big banks from betting with their own money. She has also pushed for a new version of the Glass-Steagall Act, the now-repealed law (Courtesy of Bill Clinton) that kept commercial banks out of securities businesses. And she may be sympathetic to arguments to break up big banks."
See article ~ http://dealbook.nytimes.com/2012/11/07/what-wall-street-needs-to-know-about-elizabeth-warren/?emc=eta1

Warren obviously is a truth teller and doesn't pull her punches ~  "People feel like the system is rigged against them, and here is the painful part, they're right. The system is rigged " 1 minute video on who Elizabeth Warren is ~ and she's just what this country needs.
https://www.youtube.com/watch?v=kE_wj6NHdEQ

The first step towards real change is the unblemished truth and that's what sadly lacking in Washington, DC but Senator-elect Elizabeth Warren and Rep Alan Grayson may be just the antidote for that ongoing cancer.
Part of my job is to make sense of all that I hear, and to retell it in a forceful way so that the decision-makers at Treasury can hear it. At least that's how I see it: Elizabeth Warren

One person can indeed make a difference and one or two truth tellers can help change and heal a corrupt and rigged system ~ so that's why I see Elizabeth Warren and Alan Grayson as much needed game changers. Here's a short 2 minute video of Alan destroying right wing hack P.J. O'Rourke on the Bill Maher show. http://www.realecontv.com/page/20910.html

The times, they are perhaps a changing ~ but let's wait and see if Elizabeth Warren is made chairperson of the Senate Banking committee ~ then I might be convinced.
However, I will indeed be the first to predict that Senator Elizabeth Warren will be a presidential contender in 2016 and a Warren/Grayson ticket would indeed stir the masses ~ but most certainly not the corpocracy.

Allen L Roland is a practicing psychotherapist, author and lecturer who also shares a daily political and social commentary on his weblog and website allenroland.com He also guest hosts a monthly national radio show TRUTHTALK on www.conscioustalk.net
Posted by Allen L Roland, Ph.D at 12:18 PM