THE PEOPLE'S DEBATE / MAIN STREET VS. THE PLUTOCRACY 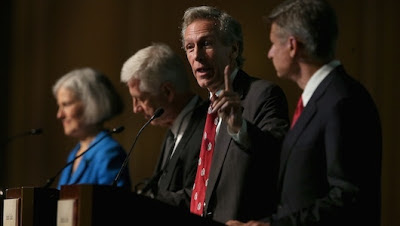 
Mainstream media has concentrated on the two Plutocracy presidential candidates, Romney and Obama but Main street America has found its voice in the recent Third party debate and finally real issues that concern all Americans were intelligently discussed and argued. A vote for one of these candidates is a vote against the plutocracy: Allen L Roland

Four alternative candidates for president of the United States debated Tuesday night in Chicago and agreed America needs a good dose of what they could provide ~ clear, straight talk that has not been market-pasteurized. Jill Stein and Gary Johnson were very effective. Video
http://www.informationclearinghouse.info/article32842.htm

It's still fabrications, showbiz and entertainment for the two prime candidates of the Plutocracy and as an example the drama "SEAL Team Six," about the raid that ' supposedly ' killed Osama bin Laden, was edited to give a starring role to the president. It will be shown on television two days before the election. http://www.nytimes.com/2012/10/24/arts/television/obama-is-prominent-in-seal-team-six-weinstein-film.html?emc=eta1

And hear what Obama and Romney Didn't Say At their Debate: 9 Things You Should Know About Iran's Nuclear Program
http://www.alternet.org/world/what-obama-and-romney-didnt-say-debate-9-things-you-should-know-about-irans-nuclear-program

And as you probably already suspected  ~ Obama care is  a total scam and most definitely not what Main Street wanted ~ but here are the funny and illuminating details in two hilarious minutes
2 minute Video:
http://www.brasschecktv.com/page/20568.html

Back to the debates ~ Paul Craig Roberts correctly writes in his must read article  In Amerika There Will Never Be A Real Debate ~
" You would never know that US citizens can now be imprisoned and executed without due process…What is the process to vote when the outcome is the same ? Both candidates represent the interests of Israel ~ not the interests of the United States. Both candidates represent the interests of the military/security complex, agribusiness, the offshoring corporations, the suppression of unions and workers, the total demise of civil liberty and the US Constitution ~ which is the way of unbridled executive power… In the US today, the power of money rules. Nothing else is in the equation. Why vote to lend your support to the continuation of your own exploitation? "
http://www.informationclearinghouse.info/article32847.htm

"There is absolutely nothing to be said for government by a plutocracy, for government by men very powerful in certain lines and gifted with 'a money touch,' but with ideals which in their essence are merely those of so many glorified pawnbrokers:" ~ Theodore Roosevelt

A vote for Jill Stein or Gary Johnson or any third party candidate is not a wasted vote ~ it is not a vote for our own obliteration ~ instead, it's a vote for main Street values vs. the Plutocracy.

He also guest hosts a monthly national radio show TRUTHTALK on www.conscioustalk.net
Posted by Allen L Roland, Ph.D at 10:44 AM