BAND OF BROTHERS # 11 ~ TOUCHING THE FACE OF GOD 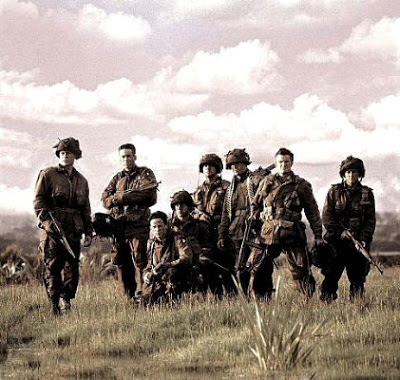 As a former high altitude Navy all weather interceptor I have seemingly touched the face of God but as a facilitator and coach of Band of Brothers #11 ~ I have felt the presence of God in bringing five GWOT active duty veterans with PTSD out of the gray zone of unworthiness into the light of their own beauty through an intensive heart centered 8 week workshop where separation and anger were replaced by love and joy: Allen L Roland

The poem, High Flight, has over the years become a mantra to pilots who have fully experienced the freedom and exhileration of high flight.
I reproduce it here as a tribute to, and in memory of pilots of all generations ~ but also as a reminder that we can all experience that same awe and wonder ~ seemingly touching the face of God ~ by fully opening our hearts.

Oh! I have slipped the surly bonds of earth
And danced the skies on laughter-silvered wings;
Sunward I've climbed, and joined the tumbling mirth
Of sun-split clouds - and done a hundred things
You have not dreamed of - wheeled and soared and swung
High in the sunlit silence. Hov'ring there
I've chased the shouting wind along, and flung
My eager craft through footless halls of air.
Up, up the long delirious, burning blue,
I've topped the windswept heights with easy grace
Where never lark, or even eagle flew -
And, while with silent lifting mind I've trod
The high untresspassed sanctity of space,
Put out my hand and touched the face of God.

When we look at God as a loving plan in action ~ an evolutionary process with which we all participate as co-creators ~ then God becomes internalized and each of us become aware that we have a part to play in a slowly evolving universal loving plan.

I dreamt of being a fighter pilot and through perserverance, effort and tenacity I achieved that dream ~ but my ultimate dream was to love so deeply that I would become one with a  Unified Field of love and soul consciousness, that I once fully experienced as a young child, and through my willingness to  go through my deepest fears and fully surrender to love ~ I am now living that dream.

Band of Brothers #11 was the confirmation that I had indeed not only touched the face of God as a pilot but was now feeling the presence of God as I facilitated the journey of five GWOT veterans through their deepest fears to a place of love, joy and gratitude and a new choice in life.

Make no mistake about it, the healing the Wounded heart workshops are not therapy, which deals primarly with symptoms, but instead they are cause related and in essence deal with re-opening of closed hearts through gratitude; seeing your life as a quest, versus a struggle, and noting how every love relationship has played its part in that individual journey to finally find, embrace and celebrate your authentic self as well as the capacity to fully love and receive love.

It is precisely the same procedure I have used for over 35 years with hundreds of individuals and have fully explained in my book ~ Radical Therapy, Surrender To Love and Heal Yourself In Seven Sessions ( not seven years ) ~ the same book that all of my Band of Brothers participants read as they complete the sessions.

The distinguished Stanley Krippner, Ph,D, correctly defines what I mean by Radical Therapy in the foreword of my book ~ " The dictionary contains many definitions for the word "radical" , one of which is " proceeding from the root, reaching for the center or ultimate source". This is exactly the approach taken by Allen L Roland's book, Radical Therapy, an inspirational and radical tool for self healing… the very root of Allen's therapy involves opening one's heart through a profound surrender to love … These self-directed activities offer powerful tools that rest upon a key proposition: Affirming our most authentic feelings, intuitions, and convictions regardless of the consequences, facilitates self healing. This risk taking inspires people to encounter their deepest fears, confront their grief, and to discover the love and integration that those emotions have been blocking."

These workshops are not for the faint of heart and in many ways they are a boot camp for the heart ~ for they are action oriented and primarily directed towards self healing ~ using gratitude as the primary tool in that journey.

Band of brothers #1 through # 10 were extremely successful with an average self-evaluated improvement in all 21 symptoms of PTSD of approximately 60 % but Band of brothers #11 was truly exceptional because of two factors;

1. Through the kindness and generosity of two people (who prefer to be unnamed) I was afforded the opportunity to move from Sonoma Valley to Danville and devote my full attention to this group without any exhaustive travel and financial distractions.
2. The Vietnam veterans organization that not only funded this group but also provided the workshop space and support.

The secret of my work is that I AM NOT their therapist but instead their COACH who not only fully shares my life journey in my book but I am the first to share my life chart ~ before each of them does the same to the whole group. As such, not only do I have the instant credibility of being an active duty veteran but I am not asking them to do anything that I havn't already done or demonstrated.

The group began on August 11, 2012 with five GWOT (Gulf War on Terror) participants with PTSD who rated themselves an average of 2.4 on a scale of 1 to 10 regarding feelings of love, joy and peace of mind with 1 being the lowest and 10 being the highest.

Seven weeks later they rated themselves an average of 8.8 regarding feelings of love, joy and peace of mind ~ a 340% improvement.
Their pre and after workshop self evaluations of their symptoms of PTSD show the same scale of improvement particularly in the area of emotional numbing, love, gratitude, joy and inner peace.

But two people are worth noting although I will not, of course, use their real names;

Jake initially in the first session rated himself a one ~ the lowest in terms of love, joy and peace of mind. Victim of an extremely troubled childhood ~ it was very apparent to me that the only person he had ever loved and trusted was his beloved grandfather who died when Jake was 21 and deployed in the Persian Gulf.
During the Gratitude exercise he realized he had thanked less than 5% of the people in his life who had touched his heart or been there for him ~ and he had never thanked his grandfather.
I then took him by the hand and said ~ "grab my hand, Jake, I'm going to find that lost and alone child within you, who deeply loved his grandfather, and once you go through your first few fears, you're going to realize that the real coach is you and then I will let go and become your lifelong friend."

Jake took my hand and I helped him realize what an incredible gift his grandfather had been and how he was still living in his heart ~ if he would but celebrate him versus grieving his death.
At that moment, I knew I was in the Unified field of love and soul consciousness, part of something so much greater than myself and knew that his grandfather was holding his hand with me.

Jake's homework was to celebrate his grandfather by being the person he was with his grandfather and start to celebrate the magic moments they had together. Very quickly Jake started speaking from his giant heart and he became a self proclaimed nine ~ on a scale of 1 to 10.

David reluctantly joined this group and was originally a skeptic until he experienced and was moved by watching his fellow brothers share their individual life charts.
He missed the session where they all meet the child within so I had a special make up session with David.
That's when I led him, through a guided meditation, to a beautiful secluded beach where he saw a little boy playing in the surf and slowly realized that he was seeing the happy, spontaneous and open child he once was as a youngster ~  and then he embraced that child and began to openly cry tears of joy. I had David ask the child some questions ~ Can I Trust Allen ? ~ Yes, He's your guide. What's the most important advice you can give me now ? Trust your coach and the process. Is there anything else you want to tell me ? " Don’t be afraid "

It was after that session with David that I fully realized I was now fully living my dream and I vividly remembered the same feelings I felt on steam catapult number one on the USS Ranger when I was waiting for the carrier to turn into the wind for an early dawn launch ~ Tears of joy were streaming down my face as I realized that I was now living my dream of being a Navy carrier pilot. And now the tears were that I was living my ultimate dream ~ being in service from a place of love, joy and celebration.

Lawrence, my assistant from Band of Brothers #8, watched and participated in the magic of Band of Brothers #11 and in the process healed some unfinished business with his mother and tapped into even deeper feelings of joy and delight within himself.

Band of Brothers #11 was my opportunity to live my deepest dream of being in service and making a difference from a place of love, joy and gratitude ~ especially toward the two people whose unselfish kindness and generosity allowed me the time to fully devote myself to this workshop.

Band of Brothers # 12 has yet to be funded but my dream now is to take this proven heart centered transformation workshop and share it nationally so that countless combat veterans with PTSD are afforded the opportunity to open their closed hearts and begin the process of truly healing themselves.