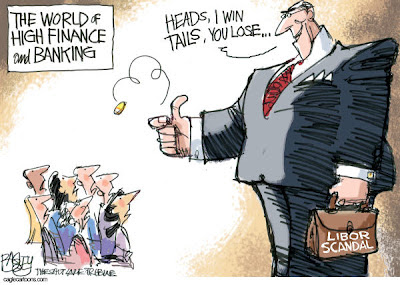 To the global banking elite it’s always heads they win and tails you lose but the recent LIBOR scandal moves that rigged financial game to a global scale which could and should result in multibillion dollar fines ~ unless Obama continues to protect Wall Street abuse: Allen L Roland

Anyone who has worked on Wall Street, as I have, knows that the game has always been rigged but never to the extent that it is now with high frequency trading and trillions of dollars being traded in virtually unregulated derivatives.

Before Glass–Steagall was dismantled by the Clinton administration, the Wall Street Casino was fairly benign but that soon changed when the Banksters took advantage of the lack of regulations and it was only a matter of time before everything from sub-prime mortgages to commodities to the current LIBOR interest rate conspiracy offered direct evidence of the rigged global financial game.

Or here’s the irreverent quick and dirty explanation of the LIBOR  banking scandal ~ and a look into the nest of the global banking crime syndicate / 4 minute video
http://therealnews.com/t2/component/hwdvideoshare/?task=viewvideo&video_id=74106

Robert Reich calls the LIBOR scandal the Wall Street Scandal of all Wall Street scandals ~ “ We trust that the banking system is setting today’s rate based on its best guess about the future worth of the money. And we assume that guess is based, in turn, on the cumulative market predictions of countless lenders and borrowers all over the world about the future supply and demand for the dough.
But suppose our assumption is wrong. Suppose the bankers are manipulating the interest rate so they can place bets with the money you lend or repay them – bets that will pay off big for them because they have inside information on what the market is really predicting, which they’re not sharing with you.
That would be a mammoth violation of public trust. And it would amount to a rip-off of almost cosmic proportion – trillions of dollars that you and I and other average people would otherwise have received or saved on our lending and borrowing that have been going instead to the bankers. It would make the other abuses of trust we’ve witnessed look like child’s play by comparison.”  See full story http://www.commondreams.org/view/2012/07/09-5


As of now, twelve global banks publicly linked to the Libor scandal face up to $22 Billion in combined regulatory penalties and damages to investors and counterparties, according to admittedly "crude" Morgan Stanley estimates. The calculation excludes the potential fallout from U.S. and EU cartel investigations, which could result in multibillion-dollar fines. But is the Department of Justice just going through the motions during an election year?

In that regard, Glen Ford writes in ICH that “The Obama Justice Department is in theater mode, again, pretending to threaten the bankster class with criminal penalties – prison time! – for their manipulation of the global economy’s benchmark interest rates. The Justice Department claims to be building criminal and civil cases in the LIBOR scandal, which in sheer scope is the biggest fraud by international capital in history. But that’s all a front, a farce. Barack Obama has spent his entire presidency protecting Wall Street, starting with his rescue of George Bush’s bank bailout bill after it’s initial defeat in Congress, in the last days of Obama’s candidacy. He packed his administration with banksters, passed his own bailout and, in collaboration with the Federal Reserve, channeled at least $16 trillion dollars into the accounts of U.S. and even European banks – by far the greatest transfer of capital in the history of the world. Obama has reminded the banksters that it was he who saved them from the “pitchforks” of an outraged public. He pushed through Congress so-called financial reform legislation that left derivatives – the deadly instruments of mass financial destruction that were at the heart of the meltdown – untouched”   See full story ~ http://www.informationclearinghouse.info/article31919.htm

As Naomi Wolf explains in the Guardian last week ~ The media's 'bad apple' thesis no longer works. “We're seeing systemic corruption in banking - and systemic collusion.”
Wolf also adds a plausible explanation for Timothy Geithner’s limited actions when he apparently learned in 2008 of "problems" with how interest rates were fixed in London  but did very little about it ~ “ The top headline of the day's news sums up why it is not that simple: "Geithner Tried to Curb Bank's Rate Rigging in 2008". The story reports that when Timothy Geithner, at the time he ran the Federal Reserve Bank of New York, learned of "problems" with how interest rates were fixed in London, the financial center at the heart of the Libor Barclays scandal. He let "top British authorities" know of the issues and wrote an email to his counterparts suggesting reforms. Were his actions ethical, or prudent? A possible interpretation of Geithner's action is that he was "covering his ass", without serious expectation of effecting reform of what he knew to be systemic abuse.”  See article ~ http://readersupportednews.org/opinion2/279-82/12426-focus-this-global-financial-fraud-and-its-gatekeepers

Perhaps the only one who knew the full implications of the corpocracy and the true agenda of the global financial banksters was the late George Carlin ~ who called it the American Dream and said that you had to be asleep to believe it. George Carlin -~ 3 minute video
http://www.youtube.com/watch?v=acLW1vFO-2Q

Obviously, President Obama is talking through both sides of his mouth regarding his condemnation of Wall Street financial abuse  since his primary role upon being elected in 2008 was maintaining the status quo on Wall Street as well as setting the stage for the New World Order. Obama, as such, personifies Michael Parenti’s vision of the modern day big brother of Orwell’s 1984 ~

"If Big Brother (of Orwell's 1984) comes to America, he will not be a fearsome, foreboding figure with a heart-chilling, omnipresent glare as in 1984. He will come with a smile on his face, a quip on his lips, a wave to the crowd, and a press that (a) dutifully reports the suppressive measures he is taking to save the nation from internal chaos and foreign threat; and (b) gingerly questions whether he will be able to succeed." - Michael Parenti -  Source: "Inventing Reality" (1986)

God help us when reality sets in.

Allen L Roland is a practicing psychotherapist, author and lecturer who also shares a daily political and social commentary on his weblog and website allenroland.com He also guest hosts a monthly national radio show TRUTHTALK on  www.conscioustalk.net
Posted by Allen L Roland, Ph.D at 8:16 PM