SHOEING OF BUSH WAS THE PEOPLE'S VERDICT OF IRAQ OCCUPATION 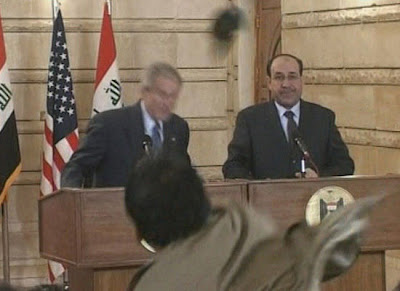 In this image from APTN video an Iraqi journalist throws his shoes at US President George W. Bush, while screaming “This is your farewell, you dog” during a news conference with Iraq Prime Minister Nouri al-Maliki, Sunday, Dec. 14, 2008, in Baghdad, Iraq.

It was just three years ago that Iraq journalist Muntadhar Al-Zaidi rightfully threw his shoes at George W Bush as a gesture of utter contempt for trying to justify an illegal attack and occupation of his country at the expense of millions of lives ~ and electrified the world in the process. There are no heads held high, as Obama claims, pursuant to our misadventure in Iraq but instead constant denial of the deep guilt and shame regarding the unnecessary, cruel and murderous havoc we have wrought on this sovereign country: Allen L Roland

FALLUJAH, Iraq ~ Hundreds of Iraqis set alight U.S. and Israeli flags on Wednesday as they celebrated the impending pullout of American forces from the country in the former insurgent bastion of Fallujah. Shouting slogans in support of the “resistance,” the demonstrators held up banners and placards inscribed with phrases like, “Now we are free” and “Fallujah is the flame of the resistance.”

In Iraq, they are rightfully considered freedom fighters against the American occupying force of 9 years as the Obama administration attempts to spin an obvious defeat of historic proportions into peace with honor ~ think Vietnam.

As an online commentator and columnist and in the spirit of Iraqi shoe thrower Muntadhar Al-Zaidi, I am throwing both my shoes today at President Barack Obama for continuing to rationalize the Bush/Cheney lie regarding our illegal attack and occupation of Iraq ~ and attempting to airbrush an obvious defeat of our imperialistic Neocon agenda in Iraq with words like “honor “ and “Sacrifice “.

Last Thursday in Fort Bragg, North Carolina, Mr. Obama said the US military was leaving Iraq with "heads held high", and thanked military families for sharing in the troops' sacrifice. In essence, President Barack Obama used his speech to US troops to embrace the nine-year occupation of Iraq, that he had originally opposed and declared dumb, and to declare the blatant destruction of the country a “success. Nearly 1.5 million Americans served in Iraq, with 30,000 wounded and nearly 4,500 dead, Mr. Obama said, but "those numbers don't tell the whole story of Iraq".

So here’s the whole story, along with both of my shoes, Mr. Obama ~

6. Number of Iraqis displaced from their country: 4.5 Million

10. Iraq is rated the fourth most-corrupt country in the world according to the watchdog group Transparency International.

It is obvious that the illegal war and occupation of Iraq was intended to show the extent of America’s power (remember Shock and Awe) but instead it only succeeded in showing the limits of American Imperialism as well as its self defeating role as a hated global bully.

And now we have fresh evidence of U.S. Iraqi atrocities, revealed yesterday by the New York Times, in transcripts of military interviews from the investigation into the Haditha massacre of 2005 ~ which were found at a trailer in a junkyard in Baghdad, which specializes in selling trailers and office supplies left over from American military base closings. http://readersupportednews.org/news-section2/308-12/8918-documents-reveal-us-massacre-in-haditha-iraq

Excerpt: "The documents ~ many marked secret ~ form part of the military's internal investigation, and confirm much of what happened at Haditha, a Euphrates River town where Marines killed 24 Iraqis, including a 76-year-old man in a wheelchair, women and children, some just toddlers."

A Iraqi Girl Tells of U.S. Attack in Haditha

2 minute Video: Ten-year-old Iman Walid witnessed the killing of seven members of her family in an attack by American marine in Haditha and exclaims “ I hate Americans”
http://www.informationclearinghouse.info/article13452.htm

So who made money on the Iraq war and occupation?

A rhetorical question for which you already know the answer ~ the Military Industrial Complex and the military contractors (mercenaries) who made and are still making millions if not billions of dollars on this illegal war and occupation and they will most certainly remain in Iraq to protect their blood stained interests. They are the vultures who feed on the victims of our rapacious greed and imperialistic adventures ~ as well as financially line the pockets of our elected political leaders and President.

So, on the third anniversary of Muntadhar Al-Zaidi’s shoeing of George W Bush ~ which I consider the inspirational start of the worldwide Occupy Protest movement ~ let’s review with Paul Jay, senior editor of the Real News Network, the events of that day as experienced by Al-Zaidi himself in a 7 minute video interview from Beirut. Al-Zaidi fully explains why he did it and how “I expected to be killed the day I threw my shoes at Bush.”

“Nothing is more powerful than individuals acting out of their own conscience.” Vaclav Havel~ ( who died today at 75 tears old )