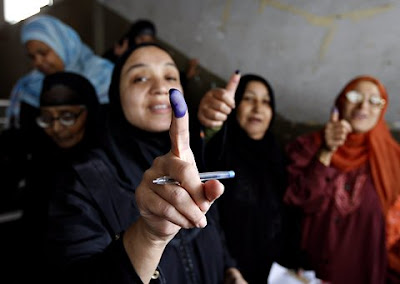 The Arab spring has become a fall parliamentary election and yet another step toward a true Egyptian Democracy. There are still stumbling blocks ahead but they will most likely be turned into stepping stones by an empowered people who are more than willing to take to the streets in demanding true change ~ Occupy Wall Street take note: Allen L Roland

The Occupy Movement started in Egypt last spring but that wave of revolt has now become a tsunami of occupy movements throughout the world ~ for each success of the people asserting their power against the military or financial elite inspires countless others to flex their muscles and take action.

Nothing can stop this global revolution for it is already too big to fail and most certainly too strong to cave under the military repression of any country or state. The people have tasted the water of freedom but it has not quenched their thirst ~ they want to drink directly from that well. And their excitement is palpable as witnessed by the extraordinary high turnout ~ 2 minute Video http://www.aol.com/video/high-voter-turnout-for-egyptian-elections/517216628/

Egypt is, once again, showing the way with the commencement of their parliamentary election this week. Russia Today (RT) interviewed me yesterday on the significance of these elections. Here, in essence, are their questions and my answers;

(RT) Early results indicate that the Muslim Brotherhood and ultra-conservative Salafists are leading the polls. Are we seeing Egypt turning into an Islamic republic with Sharia law instead of a western-style democracy?

Answer: It’s much too early to tell. Only 9 of Egypt’s 27 provinces have voted and that total only represents 30% of the seats. It was expected that Egypt’s most powerful fundamentalist group, the Muslim Brotherhood, would make the strongest showing in what is the first parliament elections since the fall of Hosni Mubarak.

(RT) A record turnout in the elections... But how much power and influence will the Parliament actually have, or will the military still pull the strings, as some fear? After all Egypt’s ruling military have said the newly elected parliament would not have the authority to dismiss the Prime Minister who they appointed or his government ~ so who exactly is in power?

Answer: This is an important first step for millions of Egyptians to make a difference and change the system. There will be on turning back until they achieve their goals and this open and fair election is the second step. The first step was taking to the streets and demanding the removal of Mubarak and this election. The next step will be demanding real authority for the freely elected Parliament. With each step, they increase their power and numbers and the military will have to acquiesce or face an even greater people revolt in Tahrir square.

(RT) So if the muslim Brotherhood does secure power in Egypt~ how does this affect Cairo’s relations with its neighbors and Western countries?

Answer: The trends indicate that Egypt’s most powerful fundamentalist group, the Muslim Brotherhood, will make the strongest showing in the first parliament elections since the fall of Mubarak ~ perhaps 30 to 40% of the vote. Remember, that this initial vote, which takes place in three two day stages, only covers nine of Egypt’s 27 provinces ~ which in turn determines only 30% of the seats. The reality is that the Muslim Brotherhood will have a seat at the political table but will have to work with other factions within the Parliamentary system. The West is going to have to accept a dramatically changing political situation in Egypt for their leverage and control has weakened considerably ~ for on the streets, the West is still viewed with well deserved suspicion.

(RT) What does Egypt’s election mean for other countries caught up in the Arab Spring ?

Answer: Egypt is an inspiration for countries across the world to realize that change and democracy is possible ~ but only if you take to the streets and put your life on the line in order to claim it. Think American Revolution which went rapidly from an idea of freedom to open rebellion and finally to a war against oppression and eventually independence. It was a long and grueling process but it was worth it.

The Arab spring which started in Egypt has finally reached the Ballot Boxes and each stepping stone to freedom and independence should be celebrated but there are many steps left in this process ~ which includes the Military (and the West) willingly letting go of their influence and control.

Tony Karon, Time, says it best ~ “2011 will be remembered as the year the middle East, as a region, declared its independence from U.S. influence”

Egypt also remains an inspiration to the OWS movement who must soon take our rebellion against political deception and financial oppression to the ballot box in the form of constitutional amendments or independent candidates who are deeply committed to our constitution and change WE, the people, can all finally believe in.

What if it is better to perish fighting for freedom than to live as a slave? What if freedom’s greatest hour of danger is right now?

It does not require a majority to prevail, but rather an irate, tireless minority keen to set brush fires in people's minds: Samuel Adams