THE SPARK OF LIFE IS LOVE / NOT THE HIGGS BOSON 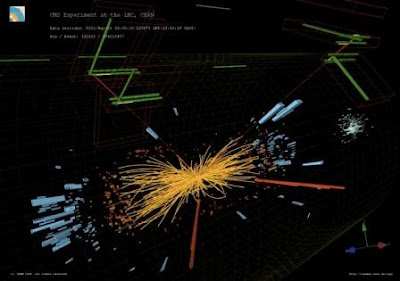 Large Hadron Collider ( LHC ) proton-proton collision in which two energetic electrons and two energetic muons, elementary particles similar to electrons, are observed—the type of event that the decay of a Higgs boson might produce, although there are other explanations as well. © 2011 CERN

Scientists have concluded that the Higgs “God Particle” does not exist confirming the prediction of both Stephen Hawking and myself in 2008. It’s time now to realize that the ultimate spark of life is a Unified Field of love and soul consciousness, whose principle property is the urge to unite, which permeates the universe and also exists deepest within ourselves: Allen L Roland

Martin Luther King Jr is not the only Extremist For Love for I have been not only advocating it for decades but proving that it lies deepest within us ~ if we would but only stop looking outside for it and surrender to its innate power and urge to unite.

A few years ago, the celebrated British physicist Stephen Hawking​ was widely reported in the press to have placed a provocative public bet that the Large Hadron Collider (LHC) ~ along with all particle accelerators that preceded it ~ would never find the Higgs boson ~ the so-called “God particle” believed responsible for having imbued massive particles with their mass when the universe was very young.

At the same time in January 23rd of 2008, I wrote THE ELUSIVE HIGGS FIELD IS ROLAND UNIFIED FIELD OF LOVE ~ http://www.opednews.com/articles/life_a_allen_l__080123_elusive_higgs_field_.htm

In that article, I explain that The basic underlying and uniting force of the Universe is a psychic energy field of love and soul consciousness ( the Unified Field ) which lies not only beyond time and space but ALSO beneath our deepest fears and whose principle property is the universal urge to unite.

( By ‘psychic’ I mean inexplicable by natural laws ).

So what about all that unaccounted for space in the universe?

Scientists have predicted that space is filled with an invisible field that gives particles their mass. They've dubbed it the Higgs field. In 1966 Peter Higgs (University of Edinburgh) proposed that the universe was full of a field called a HIGGS FIELD. Supposedly disturbances in this field, as particles move through it, cause objects to have mass.

They postulated that the Higgs Field consists of countless Higgs particles (called Bosons) that act like a kind of cosmic molasses that fills all of space. As objects move through space they have to 'wade' through these Higgs particles that 'cling' to them, causing a drag that shows up as mass.

A Cosmic quantum field of molasses ~ give me a break!

And scientists, of course, have all been hot on the trail to find this elusive particle and are spending millions, if not billions of dollars in the process.

The July 2005 issue of Scientific America highlights this search in a lead article entitled The Mysteries of Mass ~ where they announce "Scientists are hunting for an elusive particle that would reveal the presence of a new kind of field that permeates all of reality."

Even in 2008, scientists were considering the Higgs particle to be the last remaining undiscovered piece of our current theory of matter ~ See report http://www.sciam.com/article.cfm?id=the-coming-revolutions-in-particle-physics&sc=WR_20080122

But the Higgs boson was rightfully never found! Recently CERN scientists declared that over the entire range of energy the Collider had explored ~ from 145 to 466 billion electron volts ~ the Higgs boson is excluded as a possibility with a 95% probability.

Once again, scientists are obviously still looking without, through one eye, for an external physical particle and will never discover this elusive field unless they look through their other subjective eye and acknowledge the within of things and the universal urge to unite.

In other words, we are not all floating around in a static and disconnected Higgs quantum field of molasses but, instead, are all swimming in a Roland Unified field of love, connection and soul consciousness ~ that permeates the universe.

Sound too far out?

Dr. John Hagelin, one of the world's leading pioneers of theoretical physics also believes that the long sought for Unified field is a state of consciousness ~ as he stated in the Summer 1993 issue of Mind-Body connection:

“If you scratch below the surface and get to the molecular atomic and sub-atomic worlds, you find that these worlds are not material worlds. They are worlds of intelligence and ultimately worlds of consciousness."

What if infinite love ~ and not the speed of light ~ was the absolute constant of the Universe?

What if all things were contained within this field which exists beyond time and space and reveals itself in its universal urge to unite?

That would mean that love and joy reside deepest within us ~ even beneath our deepest fear and despair.

My own personal experience and work as a psychotherapist, particularly in my work with veterans with PTSD, has demonstrated this great truth ~ a truth that all human beings sense and respond to at their deepest level of consciousness.

As such, love not only has mass but permeates and unites the universe.

1. Throughout all time there has been an evolutionary tendency for all matter to unite and become increasingly complex in nature.

2. With each increase in material complexity there is a related rise in the consciousness of matter as well as the urge to unite.

Teilhard divided this fundamental energy into two distinct components: a TANGENTIAL energy which linked the element with all others in the same order and a RADIAL energy which represented the innate urge toward union and greater complexity as well as a leap in consciousness.

It is this radial energy in matter, this deep urge towards union and completion, which eventually manifests itself as LOVE.

That is why love is the threshold to another universe of consciousness ~ and all who fully love know this great truth as I most certainly do.

As such, Teilhard's RADIAL energy is one in the same with the Unified Field~ which saturates the universe in its all pervading glory.

“What name should we give, always in relation to our system, to this physico-moral energy of personalization to which all activities displayed by the stuff of the universe are finally reduced?

Only one name is possible, if we are to credit it with the generality and power that it should assume on rising to the cosmic order: LOVE. The physical structure of the universe is LOVE.”

Now all we need is a recognized physicist to question the limitations of the quantum Higgs Field of static molasses.

Dr. Wulf von Bonin does just that in his brilliant paper The Picture of Current Cosmology and Questions to it .

In his section Problems with the "Higgs Field" Bonin writes;

"If the "Higgs field" is rich in energy, enables expansion, materializes itself in particles of heavy masses, and is able to mediate masses for other particles, it has to be already "dimensional". It already possesses the characteristics of cosmic dimensions. It has to develop historically from a universal and non-dimensional basic status and this status has to differ significantly from the "Higgs field".

As Amir Aczel writes in Scientific America on August 23, 2011 ~ “But if the Higgs doesn’t exist, where does mass in the universe come from? Theories that go beyond the “standard model” of particle physics may be necessary” http://blogs.scientificamerican.com/guest-blog/2011/08/23/a-higgs-setback-did-stephen-hawking-just-win-the-most-outrageous-bet-in-physics-history/?WT_mc_id=SA_WR_20110825

And there you have it ~ the Roland Unified Field of love and soul consciousness differs significantly from the Higgs Field because its driving cosmic dimension is the universal urge to unite which permeates the universe and also exists deepest within ourselves ~ and it most certainly goes beyond the standard model of particle physics.

The Higgs field of static molasses now becomes a Roland Unified Field of dynamic cosmic interconnections fueled by the universal urge to unite ~ and we all participate in this evolutionary process or loving plan as co-creators.

Hawking wrote in BLACK HOLES AND BABY UNIVERSES about his concerns about a grand Unified Field: “And even if there is only one unique set of possible laws ~ it is only a set of equations. What is it that breathes fire into the equations and makes a universe for them to govern? Is the ultimate Unified Field so compelling that it brings about its own existence?”

In response to Hawking’s query ~ This Unified Field of love is that compelling and it does bring about its own existence because it is deepest within us all and is the virtual plasma of the universe.

Allen L Roland is a practicing psychotherapist, author and lecturer who also shares a daily political and social commentary on his weblog and website allenroland.com He also guest hosts a monthly national radio show TRUTHTALK on www.conscioustalk.net
Posted by Allen L Roland, Ph.D at 11:25 AM