THE SINKING OF AMERICA 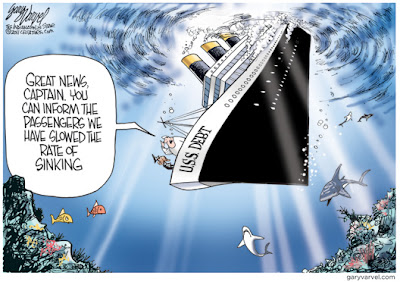 Not only are over 50% of U.S. Homeowners under water but America itself is underwater, owing more than we are worth, while Obama continues to offer false hope and promises while preparing the country for an Imperial presidency and the New World Order: Allen L Roland

A national telephone survey of American homeowners conducted by Rasmussen Reports has found that only 49 percent of those surveyed believe their home is worth more than their mortgage~ meaning that 51% are underwater. It is the third time this survey has fallen below the 50 percent mark since late 2008.

The good ship America is sinking fast and the downgrade by ratings agency S&P from AAA to AA+ is a correct assessment that President Obama and Congress are not serious about debt reduction ~ particularly when it comes to shrinking the out of control defense budget.

For example, before getting too excited about the modest uptick in net job creation and a slight downward move in the unemployment rate, it's probably worth a peek under the deck. The government does not count “discouraged workers,” or those who were unemployed but not out looking for work during the reporting period. This is where the numbers showed a really big spike ~ up from 982,000 to 1.119 million, a difference of 137,000 or a 14 percent increase. As Jeff Cox reports “The average duration of unemployment rose for the third straight month and is now at a record 40.4 weeks ~ about 10 months and now double where it was when President Obama took office in January 2009. The total number unemployed for more than half a year now stands at 6.18 million, 130 percent higher than when the president’s term began.” http://www.cnbc.com/id/44033486/

The mighty USS America is now the USS Debt and it’s sinking fast!

Here’s a visualization Of the U.S. $14.5 Trillion dollar Debt ~ which everyone needs to see ;

Some interesting facts about our growing national debt ~

1. If you spent $1 million a day since Jesus was born, you would have not spent $1 trillion by now...but $700 billion ~ which is the same amount the banks got during the recent bailout.

2. 114.5 Trillion dollars ( Unfunded U.S. Liabilities) is the amount of money the U.S. Government knows it does not have to fully fund the Medicare, Medicare Prescription Drug Program, Social Security, Military and civil servant pensions ~ it is the money the USA knows it will not have to pay all its bills. If you live in the USA this is also your personal credit card bill; you are responsible along with everyone else to pay this back. The citizens of the USA created the U.S. Government to serve them ~ and this is what the U.S. Government has done while serving The People and the greed of the corpocracy.

Here’s a Visualization of individual American families increasingly hefty debt load and how many are living on their credit cards ~ http://www.winkandwink.com/american-family-debt-infographic/#embed

Some interesting facts regarding family debt ~

2. 75% of American households are in serious debt.

4. Over the past decade, Homeowners pulled an average of $30,000 in equity out of their homes but only 15% of that money was used for home improvements.

5. In addition to their primary mortgage, the medium American Homeowner also owes $26,000 on their home equity line of credit.

Balance that with the fact that according to the US Commerce Department data ~ real private sector wages have grown just 4% between 2001 and 2010. That’s less than the 5% that wages increased between 1929 and 1939 ~ the decade bracketing the great depression.

So let’s face it ~ America is in the midst of a growing Depression and the question is why does President Obama continue to ignore this glaring reality?

As Matt Taibbi writes in Rolling Stone ~ “It strains the imagination to think that the country's smartest businessmen keep paying top dollar for such lousy performance. Is it possible that by "surrendering" at the 11th hour and signing off on a deal that presages deep cuts in spending for the middle class, but avoids tax increases for the rich, Obama is doing exactly what was expected of him?”

The answer is YES ~ Obama was selected by the global elite to not only protect their illegal financial dealings and self serving wars in bringing down the economy but to captain the sinking ship ~ thus paving the way for an Imperial Presidency and the implementation of a New World Order which will arise from the shattered wreckage of our once proud Republic.

The next step in this clearly designed imperial power grab is bypassing Congress and the voice of the people by instituting a SUPER congress (the Council of 13, which includes the President) ~ the last step before we have an Imperial presidency.

This so called Super Congress will include 6 Republicans and 6 Democrats who, along with the president, will have total control of the budget slashing process. It has even been announced that members of Congress who voted against the debt ceiling compromise will not be considered for a position within the Super Congress.

Ryan Grimm, Huffington Post, explains how this "Super Congress" would work ~ a joint committee that both House Speaker Boehner and the President are in favor of; There is some very alarming news coming out of the debt negotiations. Hidden in any deal may be the creation of a "Super Congress" that would result in more power being placed in the hands of the super-elitists and dilute the influence of the average congressman. The left is most up in arms about this development, as it would likely mean that cuts to Medicare and Social Security would be easier to get through Congress, but it could also result in the elimination of tax credits for retirement savings plans and the elimination of the tax deduction for mortgage interest payments. The "Super Congress" would place more power in the hands of Washington D.C. power players and limit the power of the average congressman.Bottom line: What the entire D.C. crowd is really looking for is a way to screw the elderly and also raise taxes, while not get caught doing it.” http://www.economicpolicyjournal.com/2011/07/disturbing-super-congress-that-is-being.html

Thus, the voice of the people would be effectively subdued and an Imperial presidency, beholden to the global elite, would firmly be in control.

It’s increasingly apparent that Obama will rely on his corporate base in his 2012 re-election bid ~ versus the increasingly disillusioned Liberals, Independents, seniors, women and youth who once willingly drank the 2008 Obama Kool- Aid in the vain hope for real change. Witness the president’s obvious allegiance to the bailout tainted Treasury Secretary Timothy Geithner, Obama’s chief of staff and former J.P. Morgan top exec William Daly and the recent appointment of his crony capitalist friend John Bryson to be the next Commerce Secretary. Over the years, Bryson has used his Wall street connections to game the political process and receive billions in bailouts and subsidies.

The die is cast, the stage is set and only an informed and outraged public stands in the way ~ but steps are already being taken by the global elite to deal with that possibility through military intervention.

So while the public sits idly by wondering if their social security checks are on the way, huge troop movements have been seen ~ possibly in anticipation of large scale public outcry over the massive power grab now being called The Council Of 13 or Super Congress.

Regarding the troop movements ~ Clyde Lewis, a veteran radio host, has had multiple callers report military movements seen in both Portland and Oregon City, Oregon and throughout the West Coast...Another listener sent Clyde three known videos of this train From You Tube and the shots from witnesses are nothing short of breathtaking. Each video shows the movement of Military vehicles not painted for desert operations, but with digital or city camouflage. The question is where are these hundreds of vehicles going and for what reason?

Here’s the third of seven Southbound Military Trains from Portland, Oregon headed to Yermo, CA through downtown Red Bluff on July 25th around 08:30.

Something is terrible wrong as America sinks ~ Defense contractors are awash in profits, lines lengthen at soup kitchens, foreclosed families sleep in shelters, 20 million are jobless or underemployed, food stamp use sets records and Seniors can barely stay afloat ~ even with their increasingly threatened Social Security checks.

The current Obama debt sellout is Obama’s final capitulation to Wall Street and the Global elite but it is, in reality, filled with hypocrisies.

Here’s truth teller Keith Olbermann’s lowdown on the The Four Great Hypocrisies of the debt deal including the Super Congress ~ and the necessity of taking the governance of this nation back from politicians. 9 Minute must see video

As to the proposed super council of 13 ~ In the traditional tarot deck, the 13th card is the Death card. It also represents not merely death, but rebirth and renewal. These were obviously pivotal concepts to ancient cultures, the understanding of which has faded down the centuries, but perhaps pivotal again if it leads to the death of the American Republic ~ as Abraham Lincoln once so forewarned.

"I see in the near future a crisis approaching that unnerves me and causes me to tremble for the safety of my country. . . . corporations have been enthroned and an era of corruption in high places will follow, and the money power of the country will endeavor to prolong its reign by working upon the prejudices of the people until all wealth is aggregated in a few hands and the Republic is destroyed." ~ Abraham Lincoln, 1864