WAGGING THE DOG IN LIBYA 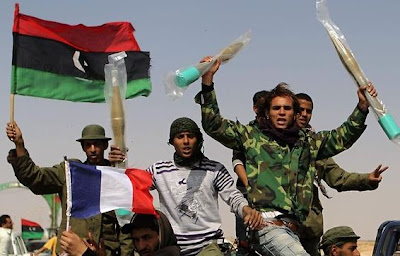 Libyan rebels or paid actors on a world stage where Crude oil has risen more than 30% since the conflict began.

Something makes me very suspicious about our involvement in Libya. Unlike the uprisings in Egypt ~ there is a pervading sense of a manufactured crisis or a wagging the dog operation with the media once again playing an active role in this deception as they did in Iraq: Allen L Roland

That evolved into bombing missions.

However, the so-called “rebels”, knew that inflating their peril was their best hope for getting outside help. So, they blatantly concocted the specter of genocide ~ and Obama conveniently used it to justify a so called humanitarian intervention. Think Iraq war build up.

But NATO's running it now, not the US, so no worries, right?

Now there's growing talk of putting US troops on the ground.

The drumbeats of war are growing and all seemingly in support of the noble and downtrodden Libyan "rebels” ~ which are quite often 3 or more guys, an AK and a pick up truck.

Robert Wenzel wrote in the Economic Policy Journal: " I have never before heard of a central bank being created in just a matter of weeks out of a popular uprising. This suggests we have a bit more than a rag tag bunch of rebels running around and that there are some pretty sophisticated influences."

In that regard, Libya not only has oil. According to the International Monetary Fund (IMF), its central bank has nearly 144 tons of gold, in its vaults.

But what if there are no or very few Libyan rebels? What if this is a Wag the Dog Operation fueled by the global financial elite?

In 1997, the world at large was still relatively innocent about “political spin”. It is fair to say that the film “Wag the Dog”, made an important contribution in the general public’s understanding of political spin and how events can be manufactured by the media to change the political climate and even start a war ~ again, think Iraq war build up .

So now what about those so-called freedom loving Libyan rebels?

Hunch: My hunch says there aren't that many rebels, or very few, for that matter ~ and that this is a CIA special ops sponsored revolt with the ultimate aim being to maintain control of that Libyan sweet crude oil and fortify the political image of our Imperialistic war machine as well as our Nobel Peace Laureate president ( chuckle ).

This video clip, from Wag The Dog, depicts what it looks like when the media creates terrorists and atrocities and it’s not a wild stretch of the imagination that it’s happening right now in Libya.