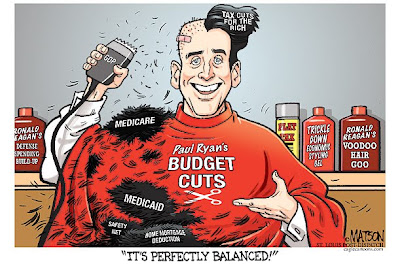 It’s grand Kabuki theater in Washington, DC these days with both parties politically posturing, our Appeaser in Chief President straddling the middle and everyone ignoring the two elephants in the room ~ tax cuts for the rich and out of control defense expenditures: Allen L Roland

In yet another last minute agreement ~ the Democrats and their appeaser in chief President Obama gave the Republicans more than they asked and averted a government shut down for a week. This most recent budget deal gives Republicans more in spending cuts than House Speaker John Boehner had asked for while funding for Planned Parenthood and women’s health issues were spared ~ but major questions remain in this Kabuki dance of political posturing.

The real question about our unending unbalanced budget is Can it go on forever and the answer is obviously NO ~ but both parties continue to kick this political can versus face the reality that the Government cannot continue to spend more than it makes indefinitely.

Fortunately there are some clear minds trying to answer this question as revealed on the Dylan Ratigan show where Dylan interviews Karl Denninger. Denninger was the original voice of the Tea Party before it morphed into its present confused state. Denninger confirms that this budget debacle can’t go on forever and that the Government covered up a normal 15% economic contraction in 2007 and 2008 with bailouts and is now facing the reality of a 30% contraction if something isn’t done relatively soon. Six minute Video ~ http://www.realecontv.com/videos/us/q-can-this-go-on-forever.html

Both Ratigan and Denninger agree that there are honest voices out there like Ron Paul, Tom Coburn and Bernie Sanders who could form a Coalition of the Willing to approach this problem in a non partisan manner. Here’s an excerpt from a recent Coburn editorial ~ “Congress and the White House are ignoring many blatant warning signs. Just last month Pimco, the world’s largest bond mutual fund, sold all its holdings of U.S. Treasury bills, the financial tools that allow us to pay Social Security benefits and fund our military. Bill Gross, who runs Pimco, sent a clear signal to investors that he expects rates on our Treasury bills to go up and prices to go down. Gross also expressed concern that the Federal Reserve, as part of its money-printing program, had bought 70 percent of all Treasury bills. When the government becomes the best customer of its own debt that’s called a Ponzi scheme, and it is only a matter of time before interest rates skyrocket. Any increase in interest rates when we are running massive deficits puts us in a deeper hole. In 2011, interest payments to service our debt are expected to reach $225 billion. If interest rates return to their historic average of 6 percent, interest payments will more than double, if not triple. Even if rates stay reasonably low, the interest-payment trap is dreadful. By 2022, tax revenue will cover only the cost of Medicare, Social Security and interest payments on the national debt. Everything else, including our defense budget, will be paid for with borrowed money, including money borrowed from potential adversaries adversaries. “ http://coburn.senate.gov/public/index.cfm/editorialsopinions

Both Ratigan and Denninger also agree that we must stop corporate handouts or welfare, address an unrealistic tax code and deal with out of control defense expenditures ~ where half of all defense spending goes to defend access to foreign oil.

Coburn correctly summarizes our economic plight in terms of the upcoming vote on the debt limit “ The best catalyst for forcing Congress to tackle our debt crisis will be the upcoming vote to raise the debt limit. We can either appease like Chamberlain or prepare like Churchill. Appeasement means avoiding the real issue and pandering to the debt-dodgers and dogmatists in both parties who define purity not on the basis of principle but partisanship and power. I’ve confronted the phony purists on my side and need partners on the left to confront the same on theirs. We will never address these challenges without putting everything on the table and making choices that may end careers. Of my Republicans friends I would ask: What good is a Republican Party without a republic? And of my Democrat friends: What good is your commitment to the poor without an economy to sustain your commitments?”

Representative Paul Ryan’s unbalanced budget haircut is a non-starter but it has indeed brought some important budget issues and questions to the table. My favorite question is how can we justify expanding and protecting Bush era tax cuts for the rich while protecting and expanding defense spending for two illegal and unnecessary wars and occupations?

It would be very helpful if our President was both asking and answering this same question ~ instead of gearing up for his re-election campaign.

About the Author: Allen L Roland is a Freelance Alternative Press Online columnist and psychotherapist. Allen is also available for comments, interviews, speaking engagements and private consultations. Dr. Roland is a practicing psychotherapist, author and lecturer who also shares a daily political and social commentary on his weblog and website www.allenroland.com . He also guest hosts a monthly national radio show TRUTHTALK on www.conscioustalk.net
Posted by Allen L Roland, Ph.D at 6:02 PM