GAME OVER FOR AMERICAN IMPERIALISM AND MIDDLE EAST OPPRESSION 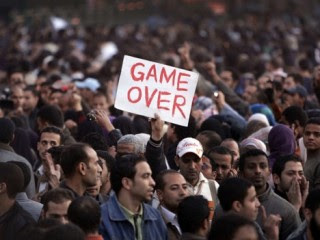 The Game is so over for American imperialism and Middle East oppression and with that defeat will come the discovery of its epicenter ~ the Big Lie of the 9/11 cover up and its utilization as a justification for the War on Terror which has now led back to ourselves as the obvious rogue state of global imperialistic designs and terror: Allen L Roland

The die is cast ~ the Middle East and North Africa are breaking their shackles of control by the imperialistic oil hungry west and nothing will stop the people from toppling their oppressive regimes and claiming their freedom. As I have written before ~ the epicenter of the Middle East people’s revolt is the ongoing oppression of the Palestinian people by Israel ~ which is a constant and humiliating reminder to the Arab world that they are servants of the global elite who maintain their oppressive regimes through military power and economic control.

As I have also written ~ the epicenter of the blossoming people’s revolt in the United States is the 9/11 cover up and conspiracy where Vice President Dick Cheney created a shadow government committed to corporate welfare and beholden to the global elite. That’s when the Republic began its death throes and the corpocracy emerged from the fallen twin tower’s ashes ~ and where it still controls the masses through fear, demonizing, and rationalized dishonesty which began with 9/11. Under Cheney’s active direction, and Tony Blair’s enthusiastic acquiescence, the Middle East has been virtually controlled by the West through their support of their oppressive monarchies and their unholy alliance with their ongoing partner in crime, Israel.

The game is over ~ events are overtaking the Obama administration who is now engaged in an elaborate Kabuki theater act of trying to seem in control of events that are quite obviously overwhelming them. For instance, Obama recently said “I have also asked my administration to prepare the full range of options that we have to respond to this crisis. This includes those actions we may take and those we will coordinate with our allies and partners or those that we'll carry out through multilateral institutions.” Secretary of State Hillary Clinton echoed this: “Everything will be on the table. We will look at all options.”~ but the truth is they have no options and virtually no control of events that are now unfolding in Libya and their words are false assurances that they have a handle on a people’s revolution that is, in essence, rightfully scaring them to death!

As Liberation correctly writes ~ “ While the U.S. policymakers dream about owning Libya outright, and replacing Gaddafi with a client regime, their main concern is now, as it has always been, stable and guaranteed control over Middle East oil resources. To the extent Washington becomes more “pro-active” against Libya, it will mean they have devised a plan ~ or found someone better ~ to do that job… As the third wave of revolution spreads, deepens, and faces new contradictions, it is the people of Libya and the Arab world who will determine their future. For activists here, our main task is to mobilize in opposition to any and all U.S. threats against Libya and the other countries of the Middle East and North Africa. “ http://www.pslweb.org/liberationnews/news/libya-and-the-arab-revolt-in.html

The American Imperial Empire is beginning to crumble and as each American bought dictator tumbles, such as Mubarak and soon Gaddafi, the momentum will build, the Arab people will feel more empowered and with it the deep dark secrets of decades of American imperialism and covert actions will be unearthed and added as fuel to this sweeping revolution ~ which will eventually reveal America as both the instigator and implementer of the so called War of Terror.

In that context, Russ Baker writes in Truthout ~ “ While the US government expresses outrage over the brutality of Col. Muammar el-Qaddafi toward his own people, we’re missing a complex but significant wrinkle that ties Qaddafi to America’s cover-up of the true path to war in Iraq. In May, 2009, a man named Ibn Shaikh al-Libi supposedly committed suicide while being held in a Libyan jail. Al-Libi is a deeply, deeply interesting fellow. Back in 2002, he was tortured by Egypt under US direction. It appears that the reason the US government had him tortured was not to stop some imminent attack on the United States, but to generate alleged ~ and false ~ links between Al-Qaeda and Saddam Hussein that could justify invading Iraq.” See full story ~ http://www.truth-out.org/qaddafi-bush-and-iraq-big-lie68069

Therein lies my point ~ as the Middle East rebellion spreads, a Pandora’s Box of illegal torture, rendition and dark covert operations in the Middle East instigated by the Cheney/Bush administration and condoned by the Obama administration will finally come to light and the threads will all eventually come back to the 9/11 cover up and Dick Cheney’s decision to ride on the dark side of America’s so-called War on Terror.

Nick Baumann wrote about the Al-Libi case in 2009 in Mother Jones: “Al-Libi was the man whose false confession, obtained under torture, of a link between Saddam Hussein and Al Qaeda provided the Bush administration with its casus belli for war with Iraq. It didn’t seem to matter that al-Libi’s claim that Bin Laden had sent operatives to be trained in the use of weapons of mass destruction by Hussein’s people didn’t make any sense. “They were killing me,” al-Libi later told the FBI about his torturers. “I had to tell them something.” A bipartisan Senate Intelligence committee report would later conclude that al-Libi lied about the link “to avoid torture.”

Don’t expect Gaddafi to live ~ he knows too many of the ‘Dark Side’ secrets that the Cheney/Bush administration, along with their so-conspirator Tony Blair, have implemented in their ambitious neo con imperialistic grand colonial design for the Middle East ~ a design that Blair often justifies with his arrogant words “ To protect our way of life “ ( chuckle )

Russ Baker theorizes that Al-Libi was probably murdered for that very same reason ~ “ Given the enormity of what al-Libi’s revelations represent, then his continued presence and ability to witness the true background to the Iraq invasion made him a grave threat to the Bush-Cheney administration and the potential vulnerability of its leading lights to war crimes prosecution… Thus, the fact that he suddenly “killed himself” while being held by Qaddafi’s police state at least raises the question of whether Qaddafi was doing a favor for the US. Of course, by 2009, when al-Libi suddenly died, Obama had become president ~but it’s safe to say that deep, covert cleanup operations don’t end with an inauguration.”

And they most certainly have not ended with Obama’s election ~ so Gaddafi is destined to become road kill, as was Saddam, in America’s ongoing imperialistic designs and oppression in the Middle East ~ particularly with Obama gearing up for re-election in 2012. In that regard, Obama is most assuredly a one term president if he continues to answer to the global and financial elite and ignores the will and demands of the people.

However, the ultimate demand of the people is for truth and transparency which has yet to be delivered by the Obama administration who, like the Bush/Cheney administration, see the American people armed with the truth as a serious threat to the financial and global elite (Plutocracy).

But that game is now over for the power of an oppressed people suddenly realizing that they have a voice and that they can manifest true change with their numbers is spreading like wildfire throughout the Middle East and North Africa. It has already reached the shores of America ~ and it is truly the only change you can believe in!

As the people take to the streets, the sins of our recent past will come to the surface and our battered Republic will slowly re-emerge from moral darkness. Nothing can stop this shift which will eventually become a shift in consciousness in late 2012.

The game is over for American Imperialism and Middle East oppression ~ and it’s about time.