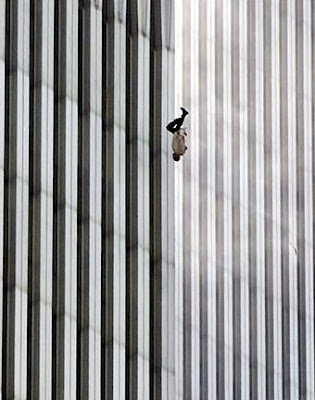 There came a moment for Jonathan Briley, as he clung to those windows high above the streets of New York, with the unbearable heat and smoke drawing near ~ that he chose to jump, versus burn to death or suffocate , and in that moment of complete surrender he became a graceful sacred angel returning to source . His image captured by Richard Drew continues to shock and demand justice for those who perpetrated or allowed this crime : Allen L Roland

I watched again last night the brilliant and moving (70 minute) video THE FALLING MAN which has still not been released in the U.S. and which can be seen by clicking on ~ http://www.informationclearinghouse.info/article17405.htm .
Note also in this video at the 23:48 minute mark ~ detonation flashes are clearly seen below the smoke as the North Tower begins its collapse.

Very little has been written about the over 200 people who jumped to their deaths from the World Trade Towers on 9/11 and instead the press has stressed the heroism and patriotism of the time ~ but I maintain that the jumpers were also heroes as well as graphic reminders that justice must be served on those who either perpetrated or allowed this tragedy to occur.

The mainstream press purposely covered up and air brushed from our view many photos, including this one, of those jumpers of 9/11 ~ but now the falling angels are crying out for justice but it's no longer an externalized justice but an internalized justice against the Cheney/Bush administration who most likely used 9/11 as a justification for their immediate and resultant abuses of power ~ while they may very well have condoned, facilitated if not expedited the attack itself.

Tom Junod, who is featured in this video, wrote an extraordinary piece for Eqsuire in September 2003 on "The Falling Man," offering several possibilities of who was the falling man. His piece ended with this very moving story about Jonathan Briley ~ who is most likely the falling man of 9/11.

As such, the human face of 9/11 most likely is Jonathan Briley who is a constant reminder of man's inhumanity to man and who now cries out for the real truth behind this evil atrocity.

Excerpt: " Jonathan Briley worked at Windows on the World. Some of his co - workers, when they saw Richard Drew's photographs, thought he might be the Falling Man. He was a light-skinned black man. He was over six five. He was forty-three. He had a mustache and a goatee and close-cropped hair. He had a wife named Hillary.
Jonathan Briley's father is a preacher, a man who has devoted his whole life to serving the Lord. After September 11, he gathered his family together to ask God to tell him where his son was. No: He demanded it. He used these words: "Lord, I demand to know where my son is." For three hours straight, he prayed in his deep voice, until he spent the grace he had accumulated over a lifetime in the insistence of his appeal.
The next day, the FBI called. They'd found his son's body. It was, miraculously, intact.
The preacher's youngest son, Timothy, went to identify his brother. He recognized him by his shoes: He was wearing black high-tops. Timothy removed one of them and took it home and put it in his garage, as a kind of memorial.
Timothy knew all about the Falling Man. He is a cop in Mount Vernon, New York, and in the week after his brother died, someone had left a September 12 newspaper open in the locker room. He saw the photograph of the Falling Man and, in anger, he refused to look at it again. But he couldn't throw it away. Instead, he stuffed it in the bottom of his locker, where ~ like the black shoe in his garage ~ it became permanent.
Jonathan's sister Gwendolyn knew about the Falling Man, too. She saw the picture the day it was published. She knew that Jonathan had asthma, and in the smoke and the heat would have done anything just to breathe. . . .
The both of them, Timothy and Gwendolyn, knew what Jonathan wore to work on most days. He wore a white shirt and black pants, along with the high-top black shoes. Timothy also knew what Jonathan sometimes wore under his shirt: an orange T-shirt. Jonathan wore that orange T-shirt everywhere. He wore that shirt all the time. He wore it so often that Timothy used to make fun of him: When are you gonna get rid of that orange T-shirt, Slim? "
( Note ) When Tom Junod finally saw the out takes of the tumbling falling man ~ one of them clearly showed an Orange T-shirt beneath his white shirt.
" But when Timothy identified his brother's body, none of his clothes were recognizable except the black shoes. And when Jonathan went to work on the morning of September 11, 2001, he'd left early and kissed his wife goodbye while she was still sleeping. She never saw the clothes he was wearing. After she learned that he was dead, she packed his clothes away and never inventoried what specific articles of clothing might be missing.
Yes, Jonathan Briley might well be the Falling Man. But the only certainty we have is the certainty we had at the start: At fifteen seconds after 9:41 a.m., on September 11, 2001, a photographer named Richard Drew took a picture of a man falling through the sky ~ falling through time as well as through space. The picture went all around the world, and then disappeared, as if we willed it away. One of the most famous photographs in human history became an unmarked grave, and the man buried inside its frame ~ the Falling Man ~ became the Unknown Soldier in a war whose end we have not yet seen. Richard Drew's photograph is all we know of him, and yet all we know of him becomes a measure of what we know of ourselves. The picture is his cenotaph, and like the monuments dedicated to the memory of unknown soldiers everywhere, it asks that we look at it, and make one simple acknowledgment ~ That we have known who the Falling Man is all along. "

The fall of the World Trade towers on 9/11 could well represent the fall of America from its once proud pinnacle of moral integrity to its present position of failed moral leadership in a rapidly interconnected world.

But the human symbol of that infamous day is now Jonathan Briley ~ the falling man of 9/11 who, after nine long years, still lives in the hearts of those who knew and loved him but also lives in the conscience of millions of Americans who seek justice for perhaps the most treasonous act in American history. http://www.wanttoknow.info/9-11cover-up

Re-open the 9/11 investigation with an independent investigator ~ A 2005 Zogby Poll reported that 66% of New Yorkers wanted the 9/11 investigation re-opened. Moreover, it found that 49% thought that VIP's in the government knew and did nothing.Those numbers would be much higher today with hard evidence of an explosive demolition.