Obama Recession / No End In Sight

OBAMA RECESSION / NO END IN SIGHT 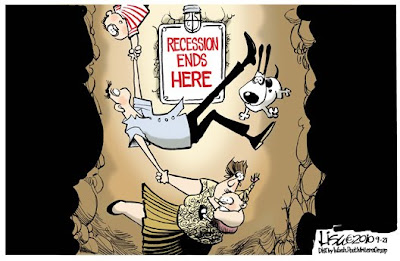 This is definitely now Obama's great Recession and his top down decision to bail out Wall Street , at the expense of Main Street, has left millions of Americans in an economic free fall with no real end in sight: Allen L Roland

Off The Charts' Chuck Marr puts the income gap in even starker terms: "This great income shift means the average middle-income American family had about $9,000 less after-tax income in 2007, and an average household in the top 1 percent had $741,000 more, than they would have had if the 1979 income distribution had remained ... Each year the average millionaire gets about $125,000 from the Bush tax cuts, according to the Urban-Brookings Tax Policy Center. Now seems to be a good time to say enough is enough. "

The international Gini index, found U.S. income inequality at its highest level since the Census Bureau began tracking household income in 1967. The U.S. also has the greatest disparity among Western industrialized nations ~ but the Mainstream Press continues to ignore this great Obama Recession in this mid-term election year.

Here's a typical letter I received after my post of 9/26 ~ LIVING ON THE EDGE OF POVERTY. http://allenlrolandsweblog.blogspot.com/2010/09/living-on-edge-of-poverty.html
Dear Allen,
Arizona is the second poorest state in the nation, but also the second most expensive for health care. I am hoping I can apply for the government "pre-existing" insurance pool in November. My company ended group coverage last April ~ couldn't afford the 1500.00 per month per employee premiums anymore...luckily I have no health problems, just can't get coverage because I've had 2 small basal cell carcinomas on my face and have arthritis. Don't even take any prescriptions! Unbelievable !
My sister in NJ and her teenage son are now homeless. She lost her job due to health problems ~ has to call in sick quite a bit but is not bad enough to get disability. All the shelters and programs Salvation Army, churches, etc. there are full. My brother told me there are tent cities springing up in several locations.
If Republicans get back majorities, well, I look for unemployment to double, foreclosures to escalate, and millions to be hitting the streets, especially seniors. Welcome to America, a third world country. There's nothing to be hopeful about anymore.
Sylvia

So what's really going on as America sinks deeper and deeper into a major Depression ?

A new paradigm has arrived in politics and it doesn't matter who wins the next elections ~ it's no longer Democrats versus Republicans ~ it's you and I against the Corporations and , unfortunately, President Obama answers to Wall Street and the Corpocracy ~ and obviously not to Main Street.

Shamus Cooke has written an excellent must read article on ICH ~ HOW CORPORATIONS OWN CONGRESS ~ where he explains how corporate money flows from party to party, so that the same goals are achieved: higher profits for corporations.

But here's an excerpt from another excellent artricle on the very same subject ~ " For a long time, American politics has been defined by a Left/Right dynamic. It was Liberals versus Conservatives on a variety of issues. Pro-Life versus Pro-Choice, Tax Cuts vs. More Spending, Pro-War vs Peaceniks, Environmental Protections vs. Economic Growth, Pro-Union vs. Union-Free, Gay Marriage vs. Family Values, School Choice vs. Public Schools, Regulation vs. Free Markets....The new dynamic, however, has moved past the old Left Right paradigm. We now live in an era defined by increasing Corporate influence and authority over the individual. These two “interest groups” ~ I can barely suppress snorting derisively over that phrase ~ have been on a headlong collision course for decades, which came to a head with the financial collapse and bailouts. Where there is massive concentrations of wealth and influence, there will be abuse of power. The Individual has been supplanted in the political process nearly entirely by corporate money, legislative influence, campaign contributions, even free speech rights. .... This may not be a brilliant insight, but it is surely an overlooked one. It is now an Individual vs. Corporate debate ~ and the Humans are losing. " http://www.ritholtz.com/blog/2010/09/you-vs-corporations/

On top of all this ~ we have the absurdity of a panel of economists declaring this month that the Recession came to an end in July of 2009 and then we have the equally out-of-touch and wishful thinking VP Joe Biden prophetically saying about the mid-term elections ~ " If we allow this to be a referendum on whether people are happy where they are now, we'll lose."

Is the Obama Administration aware that less than 35% of the American public feel that the Federal Stimulus helped the economy ? ( Rasmussen Polls )

So the recession technically ended for corporations last year because they got bailed out by Washington, outsourced their labor needs and taxes, cut back their expenses and employees and improved their profit margins ~ but that was just a sign in a black tunnel for millions of Americans who are falling headlong into poverty and have lost the debate with Corporations for an effective voice in the political process.

Welcome to America ~ a third world country, as Sylvia says, "There's nothing to be hopeful for anymore... "

That is unless Americans find their voice, take to the streets and demand their place at the political table.

Allen L Roland is a practicing psychotherapist, author and lecturer who also shares a daily political and social commentary on his weblog and website allenroland.com He also guest hosts a monthly national radio show TRUTHTALK on http://www.conscioustalk.net/
ONLY THE TRUTH IS REVOLUTIONARY
Posted by Allen L Roland, Ph.D at 11:30 AM