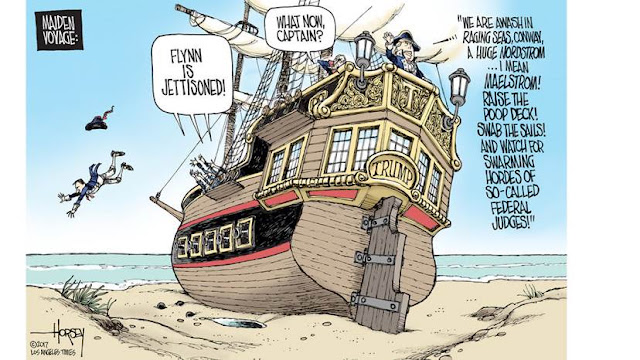 The maiden voyage of the Trump / Bannon ship of state is still beached and already there are major leaks while the inner circle ineptitude is on full display. Flynn has been jettisoned, Conway has rightfully lost all credibility, Stephen Miller is a bad rightwing joke, Rasputin Bannon is still penning executive orders from below decks while Trump lives in an alternative reality world battling the press and so-called Judges and oblivious to the fact that his ship of State is still aground: Allen L Roland, PhD

After Trump's surprise rambling Press Conference Thursday, it's time for a real time appraisal on Captain Queeq and his grasp on reality ~ for there is no beached ship of state in the warped reality of Donald Trump's fragile ego, who sees it as a "finely tuned machine."

To give you an idea of how deep this dysfunction goes, let's take a look at his first mate, white supremacist Stephen Miller, and how he mirrors the true Trump/Bannon philosophical agenda.  WSWS call him one of the Nazis in the Trump White House; 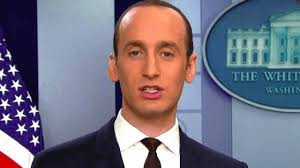 "Viewers of the Sunday morning television interview programs were given their first long look yesterday at a top Trump aide, Stephen Miller, the so-called “chief policy adviser” at the White House. What the American public saw was repulsive. If Hollywood casters are looking for someone to play the role of an SS officer in the next World War II movie, they’ve got their man in Miller."
"Miller appeared on Fox News, ABC, NBC and CBS. Eyes fixed straight ahead in a glassy stare, his replies to questions consisted exclusively of pre-programmed lies about the unlimited powers of the president in the areas of immigration and national security. He denounced the federal judges who halted the enforcement of Trump’s executive order banning all refugees and visitors from seven Muslim-majority countries." See article ~ http://www.wsws.org/en/articles/2017/02/13/pers-f13.html

Miller is now best known as one of the architects behind Trump’s Muslim travel ban and a disciple of Steve Bannon. For more, here is one of Miller’s former classmates, Cynthia Santiago, the first Latina president of the school’s Associated Student Body and now an immigration defense lawyer who has been helping people impacted by Trump’s travel ban. Amy also speaks with Univision reporter Fernando Peinado. His recent piece is titled "How White House advisor Stephen Miller went from pestering Hispanic students to designing Trump’s immigration policy."

Regarding Trump, we are all watching a known falsifier of facts and deeply insecure President being slowly dissembled by the truth ~ in real time and in true citizen Kane fashion. But we are also witnessing the sad spectacle of our President exhibiting many of the classic traits of NPD (Narcissistic Personality Disorder) whereas his need for excessive admiration as well as his inability to accept criticism and deal with failure are cause for genuine concern. See APA criteria ~ http://www.morningticker.com/2017/02/experts-say-theyve-uncovered-something-shocking-about-donald-trump/

For those participating in the mass protests that have erupted since Trump’s inauguration ~ they are motivated by a sincere hatred of Trump’s authoritarian, anti-democratic policies and the oligarchic government that he has set up which will soon be bolstered by his new National Security Advisor appointment to replace Michael Flynn.


The Trump beat goes on and it sounds increasingly warlike and ominous ~ all it will take is a major false flag operation to launch it, along with  the selection of John Bolton as National Security Advisor.


On the other hand, it is now time for the agents of light to appear, as it was in 1934 when I was born ~ during the rise of the German Third Reich and the obvious parallels  ~ and make their presence and truth known.

Circumstances do not make the man, they reveal him: James Allen


Heart centered spiritual consultant and advisor Allen L Roland can be contacted at allen@allenroland.com Allen is also a lecturer and writer who shares a weekly political and social commentary on his web log and website allenroland.com. He is also featured columnist on Veterans Today and is a featured guest on many radio and Television programs.
Posted by Allen L Roland, Ph.D at 10:20 AM