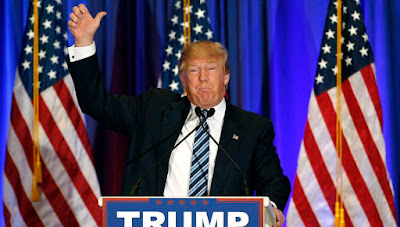 When things get to politically hectic or unpredictable, I usually turn to humor or satire to help lead me to another perspective and in the case of this years 2016 Presidential election ~ the Onion brilliantly delivers: Allen L Roland. PhD

With the primaries behind them, the presumptive nominees from both parties must now assess how to approach the general election. Here is how Donald Trump is strategizing his campaign moving forward (Most are the Courtesy of the Onion)

.   Continue to build on campaign of fear, intimidation and Islamophobia

.  Rope in the sheeple with a Nixonian Law and Order campaign.

Of course, I will not be choosing the lesser of two evils and will instead be voting for the good Dr. Jill Stein ~ the Green Party's presumptive nominee for President and look forward to her presence in the Presidential debates. God help us all in November. See https://en.m.wikipedia.org/wiki/Jill_Stein

Trump’s ghostwriter on “The Art of the Deal” says he feels “a deep sense of remorse.” (The New Yorker)  See must read Article By Jane Mayer ~
http://www.newyorker.com/magazine/2016/07/25

“The Art of the Deal” made America see Trump as a charmer with an unfailing knack for business. Tony Schwartz helped create that myth ~ and regrets it": Jane Mayer, New Yorker

Heart centered spiritual consultant and advisor Allen L Roland can be contacted at allen@allenroland.com Allen is also a lecturer and writer who shares a weekly political and social commentary on his web log and website allenroland.com. He is also featured columnist on Veterans Today and is a featured guest on many radio and Television programs