THE COLLECTED LIES OF DONALD TRUMP / THE MANCHURIAN CANDIDATE 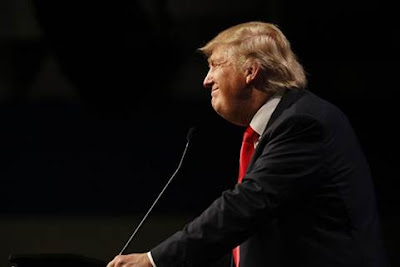 There is a reason that Donald Trump cannot be taken seriously ~ he continually blatantly fabricates and expects you to believe his self-serving assertions and lies. Many leading Republicans don't take Trump seriously but instead are guilty of wishful thinking regarding his self-proclamations and political ambitions. Perhaps we must seriously consider that Trump is in reality the perfect foil for Hillary Clinton ~ a Manchurian candidate or false flag candidate meant to serve as a constant political distraction with the purpose of coalescing public anger and disenfranchisement while reinforcing the growing public perception of Hillary Clinton as the lesser of two evils: Allen L Roland, PhD

As Trump's national campaign continues to falter and lose momentum ~ we must also face the possibility that it was always designed to fail and that the Trumps and Clintons are by design, with the massive help of the corporate media, engaging the public in a massive sting operation with only one shared purpose in mind ~ the Election of Hillary Clinton as President of the United States.

Perhaps a reading of the collected Lies of Donald trump, as compiled by Gary Trudeau, may help us understand this political name calling food fight.. http://prorevnews.blogspot.com/2016/06/the-collected-lies-of-donald-trump.html

The collected lies of Donald Trump

I rest my case, this is all political kabuki theater and unfortunately we are all becoming willing participants in this charade but we must add one more Trump rejoinder to the collection "nobody lies bigger and better than me"


Heart centered spiritual consultant and advisor Allen L Roland can be contacted at allen@allenroland.com Allen is also a lecturer and writer who shares a weekly political and social commentary on his web log and website allenroland.com. He is also featured columnist on Veterans Today and is a featured guest on many radio and Television programs
Posted by Allen L Roland, Ph.D at 11:01 AM