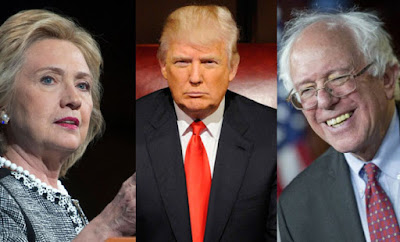 THE FABRICATOR * THE ARROGANT BULLY * THE REAL THING

We're halfway through the Presidential Primaries and already a trend is becoming apparent; Hillary's credibility baggage is far too heavy and her light is fading; Trump's arrogance and bullying tactics are now a mirror of many of his followers as his campaign implodes while Bernie's tenacious empowering message wins the day in Michigan ~ and with that win ~ the electorate are beginning to slowly realize that the only proven and credible change agent left in this race is Bernie Sanders: Allen L Roland, PhD

Does any American really want to see the Clintons in the White House again?  I think not and Michigan sensed her Achilles heel ~ Credibility. When Hillary gets pressed she will resort to deception and lies much as her husband personified during his eight year white house performance ~ where the Clinton lie machine was perfected.

For example, During the Michigan Democratic debate, Media critic Jeff Cohen praised Sanders for calling out Hillary for another Clinton lie ~ saying Sanders stood with Minutemen vigilantes which was a blatant lie. Hillary's self-serving comments about Nancy Reagan's AIDS activism at Nancy Reagan's funeral was another lie and an excellent example of how low the Clintons will stoop to score political points ~ she later apologized.


Watch this excellent 12 minute video interview as Jeff correctly identifies the Clinton Lie Machine as well as the Role of Mainstream corporate Media in their attempt to maintain the status quo. See Video ~ https://www.youtube.com/watch?feature=player_embedded&v=R-aU9KcPnEM

Donald Trump is a parody of every ten plate dictator over the last 60 years and his campaign is disintegrating as his campaign implodes with barely suppressed right wing anger and violence.


Reich goes on to expound ~ " If there was any doubt before tonight, there can be no longer: Bernie Sanders is a movement, and that movement will not and cannot be stopped. Despite the Democratic National Committee, the big Democratic donors, the Super PAC; despite the pollsters and pundits and the Washington insiders and political operatives ~ despite an establishment that doesn't want to recognize what has happened to America and why this movement is essential to reclaiming our democracy and economy ~ Bernie will prevail and the political revolution will grow. Americans are joining up and joining together. Sooner or later ~ hopefully, sooner rather than later -- we will succeed."


Wishful thinking? I think not ~ for we have reached a critical point in our political evolution where we all now know or at least sense that our current problems cannot be solved by the same consciousness and corporate money that created it.