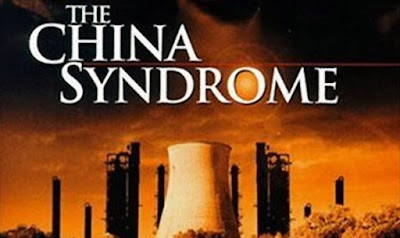 "China syndrome" is a fanciful term that describes a fictional worst-case result of a nuclear meltdown, where reactor components melt through their containment structures and into the underlying earth, all the way to China. In today's global economic climate it means that China's over built managed economic boom fueled by margin buying and excessive debt has exposed its global illusion of prosperity, as well as a commodity bubble and the threat of a worldwide economic recession. This looming financial meltdown is potentially more ominous than the 2008 Global Financial Crisis: Allen L Roland, PhD


CHINA is set to plunge the world into an economic crisis sending stock markets crashing by 50 - 75 per cent - with devastating consequences for the US and UK, a leading city expert has warned and its already happening.


Kedar Grandhi, ICH, reports "Albert Edwards, a strategist at Société Générale bank, has warned of an impending global financial crisis similar to the one that occurred in 2008-09. This time, he said, it could lead to the collapse of the Eurozone.


The warning follows a recent note issued by analysts at Royal Bank of Scotland (RBS) to investors to "sell everything" ahead of an imminent stock market crash. It also comes at a time when global markets see a short period of relief from the bearish trend that commenced since the New Year.

At an investment conference in London, Edwards said: "Developments in the global economy will push the US back into recession. The financial crisis will reawaken. It will be every bit as bad as in 2008-09 and it will turn very ugly indeed. Can it get any worse? Of course it can." See article ~ http://www.informationclearinghouse.info/article43955.htm

China's debt of at least 250 % of GDP is indicative of the growing debt problem but the biggest problem for China is transparency.


Here's the China syndrome in a nut shell ~ “Now that this debt bubble is unwinding, growth in China is going offline,” Michael Pento, president of Pento Portfolio Strategies, wrote on CNBC.com last week. “The renminbi’s falling value, cascading Shanghai equity prices (down 40 percent since June 2014) and plummeting rail freight volumes (down 10.5 percent year over year) all clearly illustrate that China is not growing at the promulgated 7 percent, but rather isn’t growing at all. The problem is that China accounted for 34 percent of global growth, and the nation’s multiplier effect on emerging markets takes that number to over 50 percent.”

So what if China is not growing at all ~ which is what I strongly suspect and that startling truth is being manipulated by a less that transparent Chinese regime who cannot take the risk of telling the truth ~ much as the United States did in 2008 and is still doing today to a large extent.


Just grasp that for a moment and we can see where the stock market could well be going which would be substantially lower in 2016 ~ particularly when you factor in that it's an election year.


Beginning last year, Chinese officials also used state-owned media to encourage individual investors to pour their savings and borrowed money into the stock market, leading to a massive bubble. When the market started to tumble over the summer, the government blamed rumormongers and speculators, and ordered securities firms and state-owned companies to keep buying, which simply disguised the underlying problems.


The lesson here is clear: Instead of trying to micromanage stock prices, Chinese officials ought to be strengthening the economy, foremost by shifting its emphasis from investment to consumer spending and services ~ but that's not going to happen.


The Financial Times cited figures from the Bank for International Settlements showing that China has the highest private debt levels in the world, and that the cost of servicing this debt has risen from 12 percent of GDP in 2009 to 20 percent today.


“The danger now is that the contraction in industrial profits, the debt service burdens, and a flagging property market could together depress household income growth ~ jeopardizing the consumer spending that forms the most robust stratum in the economy,” the editorial continued.

What is referred to as the “pain of transition” involves the destruction of whole swathes of industry and the loss of millions of jobs, raising before the regime its greatest fear ~ an upsurge in the struggles of the working class. There are already signs of such a movement. See WSWS article ~ http://www.wsws.org/en/articles/2016/01/20/econ-j20.html

So here's the bottom line ~ Think of the world's economy like a giant luxury cruise ship, similar to the Titanic ~ well, it just hit a giant iceberg (named debt) and it's sinking fast although many of the passengers are still unaware of that reality. A few are re-arranging chairs on the deck oblivious to the fact that the ship is already listing and taking on water ~ the rest is history.

And here's what it looked like to WSWS a few weeks ago;


" The quantitative easing policies pursued by the Fed and other major central banks, which pumped trillions of dollars into the global financial system, led to an explosion of borrowing by corporations in emerging markets, which more than quadrupled their debt from $4 trillion in 2004 to over $18 trillion by 2014. Now this money is heading for the exits.

According to the Institute for International Finance, emerging markets saw a $735 billion capital outflow last year, most of it coming from China, a shift characterized by the organization's chief economist as an “unprecedented event.”  Other estimates put the outflow even higher, with one economist telling the World Economic Forum recently held in Davos, Switzerland that the capital flight from China had reached $1 trillion since mid-2015.

But the emerging market tailspin is only one of the most prominent symptoms of the deepening crisis of the global financial system. On the eve of the recent Davos meeting, William White, former chief economist of the Bank for International Settlements and now chairman of the Organization for Economic Cooperation and Development’s review committee, warned that the global financial system was unstable and faced an avalanche of bankruptcies.


“The situation is worse than it was in 2007,” he said. “Our macroeconomic ammunition to fight downturns is essentially all used up.” Debts had continued to build up over the past eight years and it would become obvious in the next recession that many of them would never be repaid."   See WSWS article ~ http://www.wsws.org/en/articles/2016/01/21/pers-j21.html


The growing ugly reality that the world must now face is that China is probably not growing at all ~ only a managed economy and a secretive leadership is keeping that from becoming obvious.


Briefly, the Chinese centralized regime pledged that the restoration of capitalism would open the way for the country’s “peaceful rise” and overcome the legacy of decades of economic backwardness ~ and unfortunately that program has turned into a disaster.

In an Op Ed in the New York Times, Thomas Friedman posed the China Syndrome What If question at a recent dinner party.


"Just get me talking about the world today and I can pretty well ruin any dinner party. I don’t mean to, but I find it hard not to look around and wonder whether the recent turmoil in international markets isn’t just the product of tremors but rather of seismic shifts in the foundational pillars of the global system, with highly unpredictable consequences.

What if a bunch of eras are ending all at once?

What if we’re at the end of the 30-plus-year era of high growth in China, and therefore China’s ability to fuel global growth through its imports, exports and purchases of commodities will be much less frothy and reliable in the future?"

"But here’s the worst “what if”: What if we’re having a presidential election but no one is even asking these questions, let alone “what if” all of these tectonic plates move at once?
How will we generate growth, jobs, security and resilience?" Thomas Friedman, NYT

In summary, China is rapidly approaching an economic hard landing that imperils the global economy and it's failure to face this reality only deepens this impending global threat.


Heart centered spiritual consultant and advisor Allen L Roland can be contacted at  allen@allenroland.com Allen is also a lecturer and writer who shares a weekly political and social commentary on his web log and website allenroland.com. He is also featured columnist on Veterans Today and is a featured guest on many radio and Television programs.