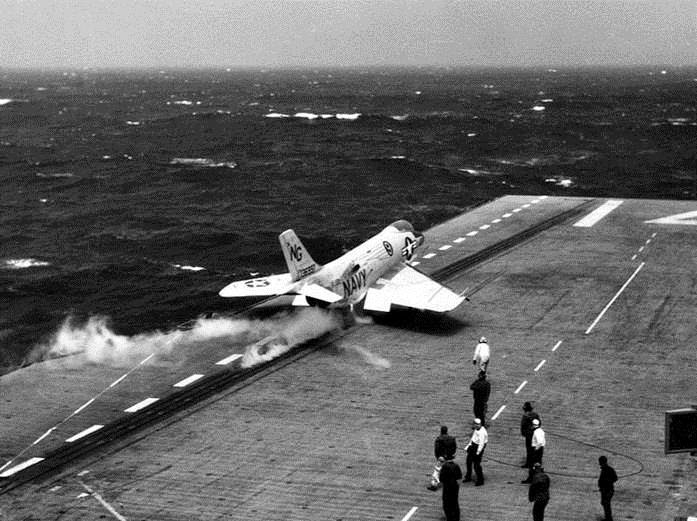 The final option became a split second of transcendence, an experience beyond the normal or physical level, and in the process I experienced the timeless and fearless world of soul consciousness where all answers are clear but can only be truly accessed through love: Allen L Roland

I have had many personal experiences of the sensory sensation of being in the Unified Field of love and soul consciousness that exists not only beyond time and space but also beneath our deepest fears but this one stands out ~ for it was a matter of life and death and it became the foundation of my belief in this state of consciousness that lies beneath our deepest fears.

In the early 1960’s while I was serving as a U.S. Navy all-weather carrier pilot on the USS Ranger on the South China Sea ~ I was launched one stormy dark night in my supersonic interceptor from the forward catapult.

It was a brutal night and I saw that the launch crew chief had all he could do to remain upright on the deck. After climbing into the cockpit I brought the F3H Demon to full throttle and felt the supersonic Navy jet shake with power as it strained against the bridle. Keenly aware of sounds, everything sounded good as I did a final check of my instruments.

The launch crew leader raised his neon batons in the air and waited for my salute, which I gave. The launch crew then released the bridle which would send me hurtling into the stormy night sky at 155 mph within 3 seconds. I braced my head against the headrest and anticipated the sudden 3 G rush of acceleration. Within seconds, thousands of pounds of steam pressure drove me back into my seat and catapulted the plane into the stormy night sky. My hands and eyes quickly swept through the cockpit as I had done hundreds of times before and I awaited my gradual acceleration to climbing speed. But it did not come. Something was wrong! I was not gaining airspeed! The plane was shaking and obviously close to stalling speed and I was rapidly losing altitude.

Only seconds away from crashing I felt myself being physically crushed by fear and the enormity of my desperate situation. I was going to die! I fought to stay airborne. In a state of total fear and panic I frantically reviewed my only options. Crash, go down with the plane... eject and hope to stay alive long enough in the icy water and be picked up by the carrier which would have to be within 3 minutes. The stall horn was now blaring! I was only 50 feet over the water and seconds away from crashing and I felt myself being completely crushed into the seat by my fear ~  so I exercised my final option ~  I fully surrendered to that moment!

I let myself be seemingly crushed by fear and in that stillness of complete surrender I became totally clear, devoid of fear and panic and seemingly beyond time and space ~ the longest split second I have ever experienced!

In that timeless second of total surrender and fearless clarity, I instantly noticed that the gear landing light was still on and that I had obviously not raised it after takeoff ~ the plane was carrying too much drag to gain altitude and airspeed and I calmly raised the gear and regained airspeed and altitude.

It was only years later, while experiencing  a re-birthing exercise, did I connect that crushing feeling I had experienced that night on the South China Sea for it was indeed my original birth trauma and I had exercised the same option I did on that fearful night as a pilot 28 years later ~ I totally surrendered, from a place of numbing fear, and was born two minutes before my twin. I still vividly remember the three lights over the birthing table as I opened my fear closed eyes at the Boston Lying In Hospital on the morning of January 18, 1934.

Obviously, part of me knew that a place of timeless serene calmness and clarity lay beneath my deepest fears and my life and death experience that night on the USS Ranger forced me to surrender to, embrace and go beneath that fear and became my first dramatic experience of the reality of a Unified Field   of love and soul consciousness, beneath our deepest fears, which later in my life I would find and prove by fully surrendering to love.

What happened that night would become the foundation of my life's quest or journey to demonstrate that beneath our deepest fears is a spring of love, joy and soul consciousness and I have helped thousands of others go beyond their fears and surrender to love through my book Radical Therapy ~ and discover for themselves that love is the foundation of virtually every true emotional healing.

Here is a link to my book:


Here is a link to the YouTube sessions of the process I teach and watch Marina conquer her deepest fear: https://www.youtube.com/watch?v=r12MoNnwPKg&feature=youtu.be

As a heart centered spiritual consultant or advisor ~ I teach a seven session process that anyone can do with my book or by watching the sessions on YouTube and doing it themselves. The inner peace and clarity I discovered that night on the South China Sea can be the authentic experience of anyone willing to go beyond their fears, surrender to love and heal themselves in the process.