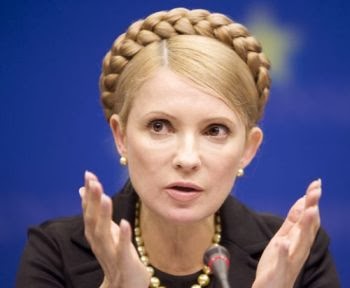 The recent freeing of imprisoned Yulia Tymoshenko, former prime minister and leader of the EPP party, is a possible game changing wildcard in the current Ukraine dilemma. Tymoshenko has often found common ground with Yanukovych while demonstrating the ability to deal with Putin to ease the implementation of a Ukraine-EU deal: Allen L Roland

What's needed now in Ukraine is the presence of a respected political figure who can deal with all internal political factions and keep the outside players, Moscow, Washington, and Brussels, effectively at bay.

Former Ukraine Prime Minister Yulia Tymoshenko, and the leader of EPP member party Batkivshchyna, is that wildcard political figure who has re-emerged after nearly three years of unjust and politically motivated imprisonment by the Yanukovich regime ~ which is desperately in need of a face saving end game ( think Mandela and South Africa ).

As Reuters reported today ~ " Yanukovich, who enraged much of the population by turning away from the European Union to cultivate closer relations with Russia three months ago, made sweeping concessions in a deal brokered by European diplomats on Friday after days of pitched fighting in Kiev, with police snipers gunning down protesters. But the deal, which called for early elections by the end of the year, was not enough to satisfy demonstrators, who want Yanukovich out immediately in the wake of the bloodletting. Parliament has quickly acted to implement the deal, voting to restore a constitution that curbs the president's powers and to change the legal code to allow Tymoshenko to go free. On Saturday, lawmakers voted to speed her release by eliminating a requirement that the president approve it. The speaker of parliament, a Yanukovich loyalist, resigned and parliament elected Oleksander Turchynov, a close ally of Tymoshenko, as his replacement."  Read full report ~ http://readersupportednews.org/news-section2/355-europe/22205-ukraine-protesters-seize-yanukovichs-compound-in-kiev

The release of Tymoshenko would transform Ukraine by giving the opposition a single leader and potential future president, although others also have claims ~ but none as credible or powerful as Tymoshenko.

As Reuters reports ~ She was jailed by a court under Yanukovich over a natural gas deal with Russia she arranged while serving as premier. The European Union had long considered her a political prisoner, and her freedom was one of the main demands it had for closer ties with Ukraine during years of negotiations that ended when Yanukovich abruptly turned towards Moscow in November.

"According to Ukrainian law my mum is already a free person," daughter Eugenia Tymoshenko told reporters, saying she was on her way to meet her mother in Kharkiv where she has been held in hospital under treatment for back pain.
Eugenia Tymoshenko spoke to the press about the expected release of her mother on February 22, after parliament voted to free her. “We need to take her out,” said Eugenia. “The parliament have [passed] a vote of no confidence against the general prosecutor, and this means that he is half-legitimate… definitely, the democratic forces have won today.” Credit: YouTube/Katya Gorchinskaya  http://sg.news.yahoo.com/video/tymoshenkos-daughter-comments-release-jailed-125246399.html

Obviously, the Ukraine wildcard is Yulia Tymoshenko and her rapid emergence from politial obscurity into political relevance will become obvious in the days ahead.