The Universal Declaration of human rights was adopted by the UN General Assembly of the United Nations 65 years ago this week.

The solution to the Israel / Palestinian problem starts and ends, as it eventually did in South Africa, with the restoration of human rights. Now the world's attention rightfully turns to the Garrison State of Israel where apartheid still rules and 650,000 Israel settlers are illegally living in Palestine territory: Allen L Roland 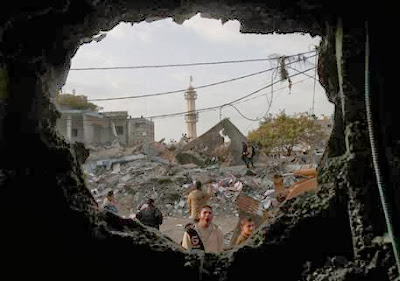 Gaza from within the Garrison State

The Palestinian disintegration plot thickens as Gaza is recently flooded with sewage and conspiracies ~ which only Israel, Mahmoud Abbas’s Palestinian Authority, and the military-controlled Egyptian government obviously condone and enjoy.
See report at: http://www.intrepidreport.com/archives/11543#sthash.ISqMCbKK.oFdKOWVl.dpuf

Achin Vaniak, CalcuttaTelegraph, spelled out his impression of this Garrison State after visiting Jerusalem and the occupied territories a few years ago ~  "What has always intrigued me was how and why Israelis from top to bottom (with the exception of a small minority) could be so brutal, uncaring and unashamed about what their country was doing'. My visit gave me the answer. Israel is a garrison state with a garrison mentality. Israelis see themselves as victims because there are powerful forces (mainly internal but also external) that help create, sustain and embellish the myth about the perpetual victimhood of Israel and of the Jews. A state constructed on the principle that it alone provides a safe haven for Jews can only justify its brutality and oppression of resident non-Jews ~ that is, the Palestinians in the Occupied Territory and those having Israeli citizenship ~ on the grounds that they are actually or potentially the dangerous ‘enemy’ who must be controlled, subordinated and monitored…Israel has been accused of violating the Oslo Accords by repeatedly and illegally expanding its settlements in the occupied territories, as well as violating innumerable UN resolutions….It should now be obvious to anyone that those Oslo accords were basically Israel’s way of partially subcontracting the occupation to the Fatah-controlled Palestinian National Authority, and for giving itself time to carry out more land grabs in the OT, that is, create new “facts on the ground”…. Israel demands recognition from the very people whom it occupied and ethnically cleansed in 1948."  See article: http://www.telegraphindia.com/1070405/asp/opinion/story_7605822.asp

Now there are over 650,000 illegal Israel settlers living in Palestinian territory but the world continues to turn a blind eye to Israel's blatant disregard for Human rights ~ where 35 laws privilege Jews over Palestinians and apartheid continues to rule.

But the tide of public awareness and economic revolt is rising, as it did in South Africa. In that regard, Nurreddin Sabir reports on Veterans News Now on recent suggested boycott action by the British Government that, "According to the Guardian newspaper, this is the first time the UK government has explicitly stated its position on settlements… in advice specifically directed at businesses. It is apparently part of a steadily stiffening position by the UK on settlements and their produce, an indication of frustration and anger at Israeli intransigence on its activities in the occupied Palestinian territories."  Read more ~ http://www.veteransnewsnow.com/2013/12/13/britain-edges-towards-boycotting-israel/

This long festering truth has become an open global sore which must be lanced with the truth as well as Boycott, Divestment and Sanctions. For more information on how you can contribute to the boycott Israel campaign, visit the BDS Movement website here.