REQUIEM FOR THE CHILDREN OF HIROSHIMA, NAGASAKI, VIETNAM, IRAQ AND AFGHANISTAN 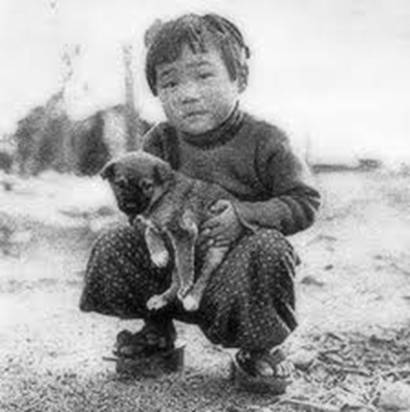 Hiroshima little Boy with his puppy

On August 6th and 9th 1945 my heart was joined to the children in Hiroshima and Nagasaki whose whole world was shattered in a few seconds by American atomic bombs ( one named Little Boy ) ~ that signaled to the world that the United States now had the capability of destroying countless others instantaneously ~ as we have since done to thousands of innocent children in Vietnam, Iraq and Afghanistan: Allen L Roland

It was a strange summer day, that humid 6th day of August in 1945, while I was sitting by myself just across the street from my home in Nahant, Massachusetts. I vividly remember the moment ~ I was gazing towards the Atlantic ocean and suddenly I felt a shudder from deep within myself.  It was a momentary sense of a deep collective human loss which at that moment was happening in Hiroshima, Japan.

Shortly after that I saw my twin brother excitedly running towards me from our home across the street.  He told me that he had just heard on the radio that we had dropped an Atomic bomb on Hiroshima and that thousands had died in the blast. (Actual deaths were 140,000 of which 60% were burned alive) Three days later, like a dagger in humanity's heart, it happened again in Nagasaki. (Actual deaths were 80,000 of which 90% were burned alive ~ It is estimated that out of every 6 deaths in the bombings, 5 were civilians and 1 was military).  See Hiroshima and Nagasaki bomb fact sheet ~ overall death listings which does not include at least 23 American POW'S who were captured Naval aviators being held in Hiroshima and not acknowledged or reported by the U.S. until the late 1970's. http://www.domlife.org/Justice/Disarmament/bombfactsheet.pdf 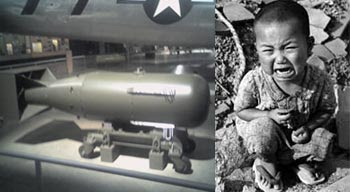 Little Boy and one of its Japanese victims

I felt very sad for a deep soul connected part of me innately knew the world would never be the same and I also sensed I had felt, at that exact moment in time, the collective loss of thousands of Japanese children, like myself at that time, who were incinerated, maimed and left homeless by these unnecessary barbaric attacks. I also had a profound feeling that something very ominous for humanity had just happened ~ and I was right !

We now had the means to completely destroy the human race ~ particularly evidently the yellow and brown races.
Nagasaki on August 9, 1945
The following extraordinary 10 minute you tube video is all in Japanese but English subtitles are not necessary ~ for it fully captures the joy and then terror and utter despair of a young Hiroshima boy and his family on that fateful August day in 1945.
http://www.youtube.com/watch?v=TiKG96oRPyg

Take some time to watch it this week ~ but also bear in mind the tens of thousands of innocent children who have been killed and maimed in Vietnam, Iraq and Afghanistan under the same but now badly frayed American imperialistic flag of freedom, liberty and democracy.

Drone attacks are now the preferred American method to kill and maim the innocent without having to shoulder the moral responsibility for these unnecessary deaths.

And then listen to these angelic children voices as they honor their innocent slain brothers and sisters in Hiroshima, Nagasaki, Vietnam, Iraq and Afghanistan ~ as well as Gaza and throughout the world with this profound requiem. ( 3 minute Video )
http://www.youtube.com/watch?v=qfN8j9r-jGQ

Rest in peace little children and may God have mercy on your perpetrators.

Allen L Roland is a practicing psychotherapist, author and lecturer who also shares a daily political and social commentary on his web log and website allenroland.com He also guest hosts a monthly national radio show TRUTHTALK on www.conscioustalk.net
Posted by Allen L Roland, Ph.D at 10:17 AM